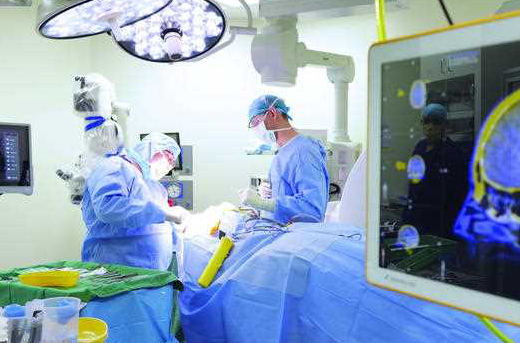 Ramsay Health Care is still a 'must have'

Ramsay Health Care, one of Australia’s best companies, delivered a credible full year financial report yesterday. As befits a market leader that trades at premium to its peers, it met its own forecast with core NPAT (net profit after tax) up 12.7% to $542.7 million and core EPS (earnings per share) up 13.0% to 261.4c per share. In February, Ramsay upgraded guidance for both to be in the range of 12% to 14% growth. 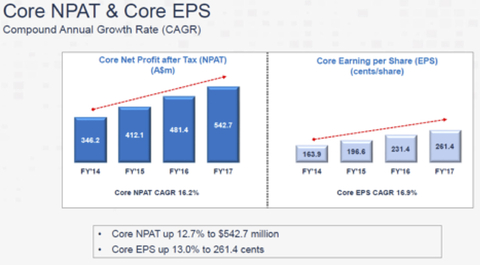 While the full year result was on target, Ramsay’s guidance for FY18 of core NPAT and EPS growth of 8% to 10% was less than some analysts had anticipated, and the market sold the shares down 5.3% to close at $68.10. On the long-term chart (see below), this will only appear as a small blip. 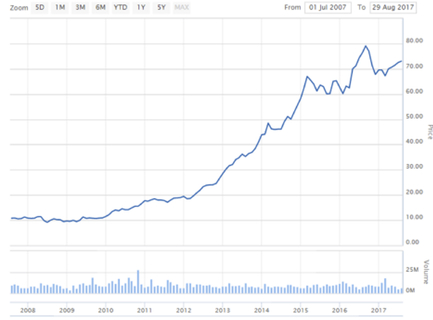 Only two months into the new financial year, it is probably understandable for Ramsay to be a little cautious on the numbers, particularly as it has a history of upgrading guidance as the year progresses. While noting the challenges with the operating environment in Europe, the company expects “strong growth” with the mainstay Australian hospitals business.

Let’s take a closer look at the numbers and see if there are any concerns.

The second half (January to June) is only 181 days, and in Australia at least, surgical procedures in the January holiday period are light and hospital admissions fall. That said, the performance of the key Australian hospitals division, which generates 50% of Group EBITDAR (earnings before interest, tax, depreciation, amortization and rent/restructuring costs) , wasn’t as strong in the second half. While revenue was up 5.1% compared to the corresponding half in FY16, it was down on the first half with a fall of 1.8%. 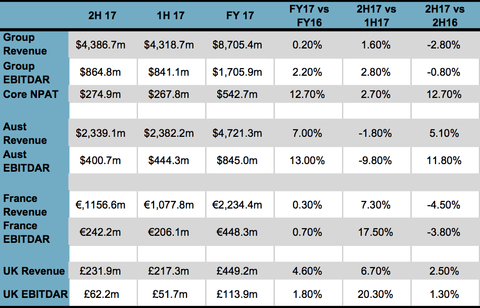 Ramsay noted that operational efficiencies with its Australian hospitals led to an improvement in its EBIT margin of 80bp for the full year - from 13.0% in FY16 to 13.8% in FY17.

With regard to its outlook for Australian hospitals, Ramsay says that operations and admissions continue to trend up as expected with an ageing and growing population, and points to opportunities for out-of-hospital growth opportunities in adjacent businesses including retail pharmacy.

In France, Ramsay Generale de Sante grew revenue by 0.3% over the year and EBITDAR by 0.6%. This was achieved despite the pressure on tariffs by volume growth and strong cost control. Although down on the corresponding period in FY16, EBITDAR in the second half of €242.2 million was up 17.5% on the first half. Looking ahead, Ramsay says that “the election of the new government has seen an uplift in business and consumer sentiment, which bodes well for the future in that country”.

The UK, which is the smallest of Ramsay’s three operating segments, grew EBITDAR by 1.8% on revenue growth of 4.6%. Second half EBITDAR was up 20.3% on the first half. Ramsay says that its cost restructure program carried out in 2017 is delivering operational efficiencies. While the UK remains a challenging environment, the tariff increase scheduled for April 2018 will assist.

Ramsay continues to execute its four-pronged growth strategy. Firstly, organic growth underpinned by the demographics of an ageing population and increased demand for services from quality operators, and secondly, brownfield capacity expansion to cater for unmet demand. In FY17, Ramsay completed, or commenced, projects worth $500 million that will add 500 beds, 27 operating theatres and 3 private emergency centres. It opened two brand new facilities: The Border Cancer Hospital in Albury Wodonga and the Southport Private Hospital, and completed several brownfields projects. 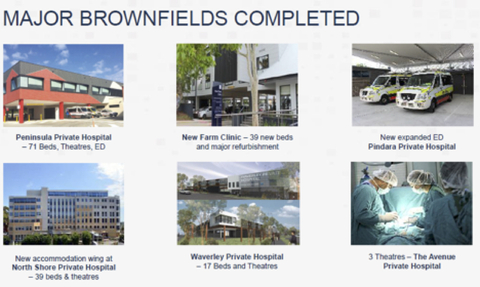 The development pipeline for FY18, which is worth $385 million, includes the Northside Clinic at St Leonards in NSW, Albert Road Clinic, Lake Macquarie, St Andrew’s Private Hospital at Ipswich as well as Croydon Day Surgery in London and Tees Valley Private hospital in Middlesbrough.

The third prong involves public/private collaborations, as governments look for private operators to provide services to public patients. The fourth prong is acquisitions and strategic opportunities. The Ramsay Retail Pharmacy franchise network, which is on track to total 55 retail pharmacies in sites close to hospitals so that Ramsay can extend both medication and other services to patients beyond the hospital walls is an example of a strategic opportunity.

What do the brokers’ say?

Prior to the result, the brokers were marginally positive on the stock. According to FN Arena, of the 6 major brokers who follow the stock, there were 2 buys and 4 neutrals. The consensus target price was $74.99. This is likely to be downgraded a touch in the coming days, as the consensus forecast was for EPS growth in FY18 of 11.1% rather than Ramsay’s guidance of 8% to 10%.

History says to pay a premium for companies that can consistently deliver profit growth. Since 2014, Ramsay has grown profit at CAGR (compound annual growth rate) of 16.2% and EPS growth of 16.9%. Next year’s guidance of 8% to 10% shows that the market is getting a little tougher, but my guess is that this is the board being a little conservative rather than any new industry headwinds coming their way. They can’t control the strength of the Aussie dollar, which shows few signs of wanting to head south. And while Europe might remain challenging, management seems remarkably confident about the growth opportunities in Australia.

On a multiple basis, there is no doubt that Ramsay is an expensive stock. But with premium companies, you need to buy when others want to sell, and I reckon this might be a bit of a buying opportunity.

I am an investor in Ramsay and it will remain a core stock in my portfolio.