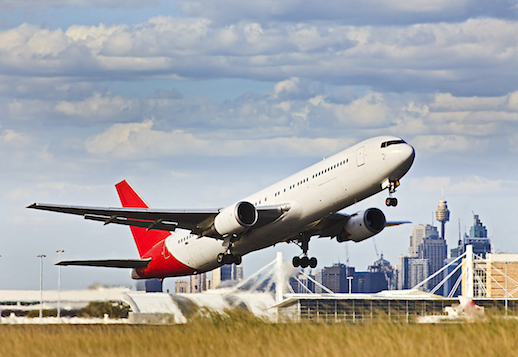 Yesterday, Sydney Airport (SYD) released its traffic performance for November. This showed that November was a strong month for the Airport, with domestic passengers 3.1% higher than in November 2016 and international passengers growing by a pleasing 7.1%.

Year-to-date, domestic passengers have grown by 1.5% compared to 2016. With international passengers, which drive 70% of the airport’s revenue but only represent 37% of the traffic, the growth rate is 7.4%.

Passenger growth, particularly with higher yielding international passengers, and the development of retail, property, parking and ground transportation services, has allowed Sydney Airport to increase its distribution to 34.5c per unit for FY17. Since 2012, distributions have increased at an impressive compound annual growth rate (CAGR) of 10.4%. 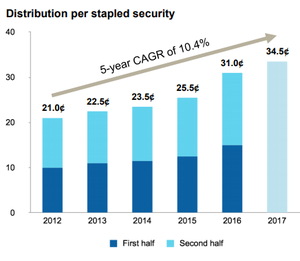 Looking forward, Sydney Airport sees continuing opportunities to grow passenger numbers, particularly with international passengers from Asia due to Sydney’s status as the main gateway to Australia and an Asia/Pacific business hub, and the growth in the outbound Chinese tourist. It says that 35% of landing/departure slots remain available at Kingsford Smith, while the introduction of larger aircraft by airlines will contribute to increased revenue per slot.

However, with Western Sydney Airport moving from the concept stage into construction, Sydney Airport faces the threat of competition when the new airport opens in 2026. A wholly Government owned company chaired by Mr Paul O’Sullivan, WSA Co, has been established to deliver the project, with $5.3bn of government equity available. Last week, expressions of interest were being sought for early stage earthworks.

What do the brokers say

In the medium term, Sydney Airport should be able to grow passengers, increase revenue and most importantly, increase distributions. Its monopoly as Sydney’s only commercial airport won’t be under any attack until at least 2026.

However, markets like to anticipate events well before they actually occur. The chances are that as development on the second airport ramps up, markets will fret about the competitive risk and factor this into the share price. And it won’t just be investors who worry about competition.

Sydney Airport has net debt of $7.9bn. While this has an average maturity stretching into 2024, as the debt comes up for renegotiation, banks, bond holders and rating agencies will increasingly consider whether a competitive threat could arise. It just takes one bank or rating agency to believe that the threat is credible and possibly material, and Sydney Airport will find that it is paying higher interest charges.

And if bond yields start to rise again, which seems inevitable as the growth momentum in the US continues and the Federal Reserve tightens monetary policy in response, Sydney Airport and other “bond proxy” stocks will come under pressure.

Sydney Airport is not a buy. For holders, don’t wait too long to sell.