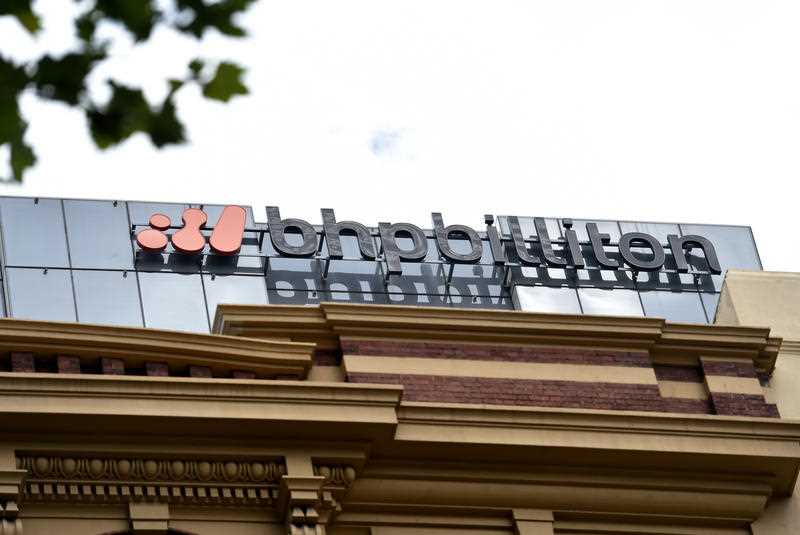 It is somewhat ironic that in the week that BHP launched a $10m TV advertising campaign themed “Think Big”, activist shareholder Elliott Funds fired another salvo at the BHP Board and renamed its campaign from “Value Unlock Plan for BHP” to the simpler, “Fixing BHP”.

And BHP is certainly in need of some fixing. This is the same company that destroyed billions of dollars of shareholder wealth by buying assets at the top of the cycle, invested on the basis of its own ridiculously optimistic forecasts on commodity prices, and misled shareholders with a hopelessly flawed progressive dividend policy. It was way too quick to dismiss Elliott’s plan when first tabled in April (see my article here).

Elliott’s original plan had some problems. In particular, the suggestion that BHP move its primary listing to the UK. Treasurer Scott Morrison blocked the idea, reminding shareholders that there were a number of approval conditions relating to BHP’s merger with Billiton in 2001 that had to be honoured. But the substantive points of the proposal, that BHP should consider a sale or demerger of its US petroleum business and a renewed focus on capital returns, remain.

Elliott’s letter to the BHP Board on Tuesday and the accompanying presentation is available here. It starts by outlining BHP’s chronic share price underperformance, which is detailed in the table below. This shows that compared to a broad range of comparators (Rio Tinto, comparable portfolio, comparable pure-play mining portfolio, ASX 200, etc) it has underperformed over pretty well every time period. For example, over the last eight years, its total shareholder return is only 46% of Rio’s.

Graphically, this is represented by the following chart, which shows total shareholder return since 2008 using a common base, with BHP in brown, Rio in black and the comparable portfolio in grey .

BHP Total Shareholder Return vs Rio vs Comparable Portfolio, 2008 to 2017 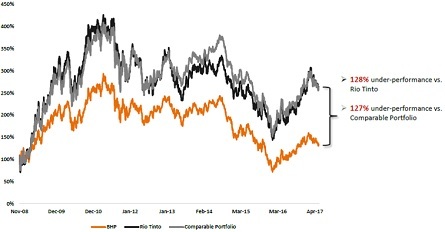 In regard to BHP’s Achilles heel, its onshore US petroleum, Elliott says that BHP has “destroyed” US$22.7bn or 78% of its value. A total investment of US$29.1bn through US$19.9bn of acquisition costs, and US$9.4bn of negative cashflow, is now worth around US$6.5bn on consensus broker estimates.

According to Elliott, BHP is not the right custodian of the US onshore assets, petroleum offers no real operational synergies or risk diversification, BHP does not operate the vast majority of its petroleum assets and the value of these assets is obscured. Elliott concludes that “the intrinsic value of BHP’s US petroleum business is obscured by bundling it with BHP’s other assets within an overly complex group structure while managed from a great distance, with insufficient focus”.

Elliott proposes that the value of the US petroleum business should be unlocked via a full or partial demerger. They cite the demerger of South32 as clear precedent for success, noting that South32 has outperformed BHP by 47% since the demerger. They say that “a more nimble and focused independent petroleum business, with a more disciplined approach to capital management, would have avoided significantly overpaying for BHP’s US onshore portfolio.”

In regards to capital returns, Elliott says that there is strong shareholder support for BHP to return excess capital to shareholders. This won’t disrupt the balance sheet or put future growth at risk, will help ensure disciplined and optimal capital allocation, and will stop excess capital being wasted on value-destructive acquisitions and other pet projects. They say that there is a very strong case for regular buybacks, although arguing that BHP needs to lift its game on buybacks as its track record has been “abysmal” (it has done these infrequently, and paid way too much relative to book value when it has.)

They continue to push for a single unified entity (rather than two separate companies listed on different exchanges), and accept that this new entity would be headquartered in Australia, be an Australian tax resident, and have its primary listing on the ASX. A secondary listing would be in the UK.

They refute BHP’s claim that this would cost US$1.3bn to implement, saying that the costs should only be around US$200m. The benefits of unification are less clear, however. Elliott contends (though doesn’t substantiate) that it will enhance BHP’s market value by US$5bn. They say that BHP will be able to monetise franking credits more quickly and more efficiently (current reserve US$9.8bn), and that having a single unified structure and share capital will give BHP an “acquisition currency” (other than cash) that could be used in future acquisitions.

BHP hasn’t yet formally responded to the letter, which is probably a good thing because Elliott (and other aggrieved shareholders) aren’t going away. CEO, Andrew Mackenzie, might be doing a strong job of driving cost efficiencies and productivity improvements, but he is not helped by a company culture that says “BHP knows best”.

Interestingly, Mackenzie was out spruiking BHP at the Bank of America Merrill Lynch Global Metals, Mining and Steel Conference on the same day as the Elliott letter arrived. In what can only be described as a very “blue sky” presentation, Mackenzie discussed how the BHP  team had delivered material value uplift, said that BHP had a broad suite of opportunities to grow base value by 50%, forecast further cost reductions and technology initiatives to unlock resources, and promised to increase the return on capital employed.

He also described the release of latent capacity across the portfolio, offering the prospect of attractive returns for low risk. An investment of US$5bn could add over 20% to current production at an average return of 75%.

Major growth projects on the books offer potential average returns of 16%. Priced at around US$25bn, these include copper projects in Chile (Spence Growth) and at Olympic Dam in South Australia, and the Jansen potash project.

In regards to onshore US petroleum, Mackenzie said that all options were on the table.

Elliott and the BHP Board may not be ready yet to sit down and smoke the peace pipe, but because BHP has such a lousy record and Elliott shows no signs of going away, BHP will inevitably cede major ground on this proposal. The US petroleum assets will either be put up for sale or demerged, and expect BHP to be far more focused on returning capital through off market buybacks.