The market’s reaction to supply-chain logistics company Brambles' third-quarter trading update, which saw shares jump by 5.9% yesterday to close at $10.17, is perhaps as surprising as the savaging it dished out earlier this year.

Back in January, Brambles issued a trading update for the first half year, warning of some challenges with its US pallets business and saying that it wouldn’t meet its current sales and profit guidance, the latter being full-year growth of 9% to 11%. The shares fell by 15.8% from $12.28 to $10.34. In February, Brambles announced that its half-year underlying profit had only risen by 3% and sales by 5% (both on a constant currency basis), and formally downgraded its full-year profit guidance to flat underlying profit growth, on sales growth of 5%. It also re-iterated on the challenges in its largest market (North American pallets), noting increased competitive pressures and customer destocking. The shares got hammered again, falling another 10% on the day to $9.47.

So, why did the shares rally?

Probably because the market had over-reacted to the previous announcements and that there hasn’t been any further deterioration in the business. The old saying that “bad things come in threes” resonates with markets, with analysts and investors accustomed to the profit downgrade cycle which often plays out over multiple downgrades. No further deterioration was actually good news - a modest surprise!

Also, Brambles was a lot more careful with its language, and although still citing competition and lower prices, was able to point to contract wins in North America that will make a financial contribution in FY18.

Arguably, a modest surprise on both counts.

Where to now for Brambles?

Although the Brambles business of CHEP pallets and re-usable plastic containers isn’t particularly fashionable, it is the global leader in its field, which is a fairly rare thing for an Australian company. It also still just sneaks into the ASX top 20 companies, and is arguably our largest “real” industrial company and one of the few genuine “cyclicals”.

So, from a portfolio perspective, Brambles matters. It is not big enough to be a “must have”, but it is certainly worth having an opinion about.

Let’s start with the Brokers.

The brokers were taken by surprise with the January and February profit downgrades. Most feel that the issues in the USA are temporary, but some are wary and note that Brambles has also abandoned its long-term financial targets. Overall, they are neutral, with two buys, five neutrals and one sell. According to FNArena, individual ratings and target prices are as follows: 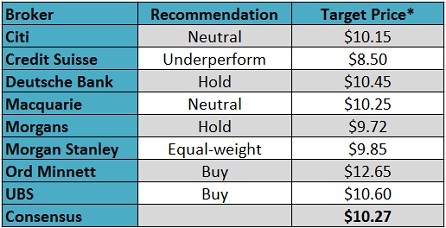 While there may be some changes to the target prices over the next few days as the brokers upgrade their models for the new data, they are probably only going to be marginal. Compared to valuation, Brambles is close to fully priced.

On a multiple basis, using average FX rates, Brambles is trading on 19.7 times forecast FY17 earnings and 18.0 times FY18 earnings. The forecast dividend yield is 3.0%, with only 25% franked.

Hardly multiples or yields to get too excited about!

But, Brambles is one of those rather boring stocks that, until recently, has had a strong track record of delivering on expectations. And as a global logistics business, the tailwind of rising global growth should be good for Brambles.

I think Brambles is a ‘hold’. No more bad news was a positive, as were the contract wins in North America and strong volume growth in Europe and Latin America. While Brambles has high hopes for its data analytics and digital business as a growth enabler - the so-called BXB Digital - it is not yet clear how this will generate revenue. If you are bullish on world growth, then maybe Brambles is for you, but otherwise, the best buying opportunities might have already passed by.