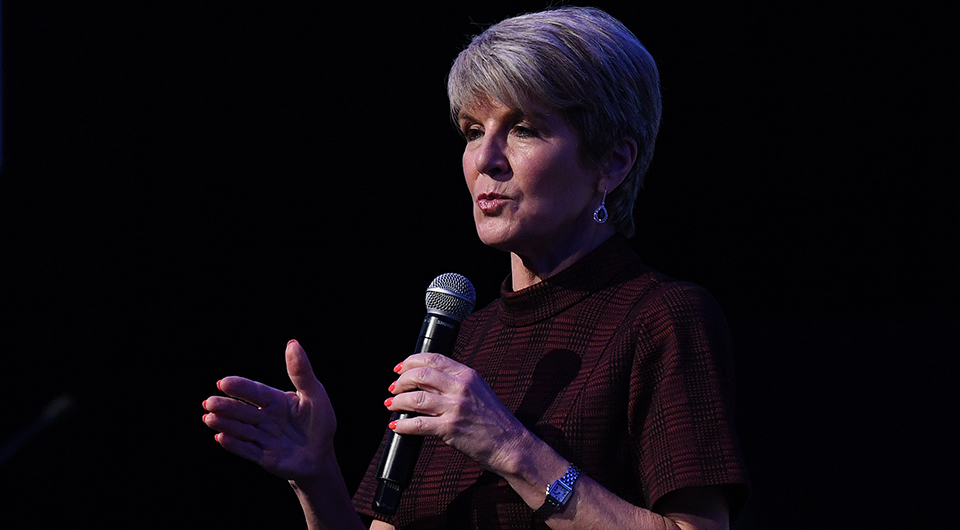 What do Julie Bishop, GM's CEO and the incoming ECB president have in common?

One is the first female CEO of a major global automaker. The second was Australia's first female foreign affairs minister. The third is the nominated President of the European Central Bank.

These powerful women each possess intelligence, ambition and highly impressive professional credentials. However, all three have that special something extra that makes them stand out: executive presence.

Mary Barra, Julie Bishop and Christine Lagarde have worked extremely hard to hit the heights of their male-dominated professions. Each has a sharp mind and the drive to make things happen. Respected and admired as women of integrity, action and principle, each also has an individual style apparent in how they communicate and carry themselves. Their executive presence is understated yet powerful.

So what's the secret to having executive presence and why do Barra, Bishop and Lagarde possess this valuable quality in abundance?

Executive presence is about having a sense of self that allows one to draw upon your innate qualities to project composure, substance and authenticity in all manner of situations and surroundings. It's about summoning confidence from an unwavering belief in one's worth and creating a positive lasting impression in the minds of others. It's a blend of commercial demeanour, executive style and professional brand.

Boston-based leadership research and training company Bates Communication defines executive presence as “the qualities of a leader that engage, align, inspire and mobilise people to action.” It’s what makes the cream rise to the top, and Mary Barra, Julie Bishop and Christine Lagarde are great examples of it.

Barra started her career at General Motors at the age of 18 with a holiday job doing assembly-line quality control. After graduating with a science degree in electrical engineering, she started the 30-year climb up the corporate ladder of one of the biggest companies in the world. Barra could have quickly disappeared in the mid-management shuffle at a company the size of GM. Instead, in 2014, she became its CEO.

Barra's ascension to the top job was a baptism by fire. GM was in the midst of a product recall crisis, with millions of cars affected and 13 fatal crashes attributed to an ignition fault. With the company's reputation at stake, Barra demonstrated humble yet assertive leadership. Sincere in admitting GM's liability, she also displayed a remarkable commercial demeanour in vowing to transform the company.

“We aren't simply going to fix this and move on. We are going to fix the failures in our system – that I promise. In fact, many are already fixed. And we are going to do the right thing for the affected parties,” Barra said at the time. She combined regret for past mistakes with a conviction to do better. By 2017, GM had recuperated its image and hit its highest stock price ever after announcing a renewed focus on electric vehicles. Barra's executive presence shone brightly.

Staying true to your executive style

Australian politics is very blokey. So it was a stellar achievement for Julie Bishop to rise through the Liberal Party ranks to become Australia's first female foreign affairs minister. Bishop navigated a misogynistic political culture with equal amounts of guile and grace. She was a formidable force in an often antagonistic party room. Rather than play the boys at their own game, she looked to her strengths: "If you're trying to be a man, it's a waste of a woman," she once pithily put it.

As the Australian media often notes, Bishop is fond of fashion. She recalls a colleague advised her to opt for sedate rather than her usual sensational when she was appointed the Minister for Ageing in the Howard Government. Bishop would have none of that. "I don't apologise for it," she said in an interview. "It's who I am, and if you want authentic politicians, you've just got to accept the fact that I love fashion. I always have, and I always will."

For some, fashion is a trivial matter. But Bishop understands it’s an expression of personality, a statement to the world about her executive style. Her sartorial choices were sometimes mocked and derided by opponents, but that never stopped her from wearing what she wanted, or from being a fabulous foreign minister. Her style is a totemic assertion of her executive presence.

Christine Lagarde regularly ranks high on lists of the world's most powerful people. A lawyer by training, Lagarde held several ministerial posts in the French government before becoming the chief of the International Monetary Fund in 2011. Like Bishop, Lagarde has impeccable style and an aristocratic bearing. However, there's more to her executive presence than Chanel suits and purposeful poise.

The holder of one of the most influential positions in the world economy, Lagarde has had to be extremely mindful of her credibility. Markets and banks around the world have hung on her every word, with little room for ambiguity or frivolity.

However, her professional brand was severely tested in 2016 when she was found guilty of negligence in a case brought against her for actions in 2008 as the French Minister of Finance. Even though it was on a relatively technical charge, the verdict might have ended a lesser person's career, but Lagarde's standing remained intact.

As the then U.S. Treasury Secretary Jack Lew remarked: "We have every confidence in her ability to guide the fund at a critical time for the global economy." Lagarde's executive presence, her outward display of inner resolve, was on view as she got straight back to work. She said at the time: "I am not satisfied with it, but there's a point in time when one has to just stop, turn the page and move on and continue to work with those who have put their trust in me."

The power of executive presence

All three women continue to accomplish amazing things in their careers. Barra successfully leads GM into the world of electric and driverless cars. Bishop has just been appointed the Chancellor of the Australian National University (ANU). Lagarde is awaiting confirmation as the President of the European Central Bank. Each has tapped into her deep pool of talent to develop her unique executive presence. They are trailblazers in their respective fields and beacons for all women aspiring to greatness.

Melissa Lewis is the founder and CEO of The Ascension Group, a personal brand development company committed to supporting professional women in the workplace.