Interest rates: up, down or stay the same?

RBA Governor Philip Lowe continues to warn mortgage holders not to be complacent about our long period of low interest rates. In 15 separate speeches and statements this year, the Governor has warned that the next move in interest rates will be up, rather than down.

RateCity.com.au director of research, Sally Tindall, says she thinks that while the hike to the cash rate is still a long way off, now is the perfect time to protect yourself against any rate rises.

“Even the RBA concedes there won’t be any change in the “near-term”, but the Governor isn’t delivering these warnings for no reason,” she said.

“He wants people to start paying down their mortgages now, to reduce the impact future rate hikes will have on debt-laden households.

“It’s almost been eight years since the RBA last increased the cash rate. That means anyone who took out their mortgage after November 2010 might not fully appreciate the consequences a rising cash rate can have on the family budget.

Chief economist of AMP, Shane Oliver, holds a different view: “We see no reason to change our view that rates will remain on hold for a lengthy period. I am even tempted to the RBNZ approach that the next move in rates “could be up or down”.

“The RBA will yet again leave interest rates on hold when it meets tomorrow. While recent economic growth and jobs data has been good, we are still waiting for inflation and wages growth to pick up and the slide in home prices risks accelerating as banks tighten lending standards, which in turn threatens consumer spending and wider economic growth. As a result it would be dangerous to raise rates and we don’t see the RBA hiking until 2020 at the earliest and still can’t rule out the next move being a cut.

Meanwhile, our third expert, Peter Switzer of Switzer Home Loans, says “I’m more positive on the Oz economy than Shane so my view is that rates will rise next year.

“Many economists think the first official interest rate rise will be 2020 but I (and the likes of NAB’s chief economist, Alan Oster) think it will be mid-to-late 2019.”

Switzer and Tindall both agree that this period of low interest rates is a good time to throw any spare cash at your mortgage, using a redraw facility or offset account.

“Making extra repayments early on in your mortgage will also mean your money will work much harder for you in the long run.

“It will also give you a buffer to deal with any further out-of-cycle rate hikes from the banks,” Ms Tindall adds, pointing to the savings set out in the three scenarios below as a huge reason for doing this. 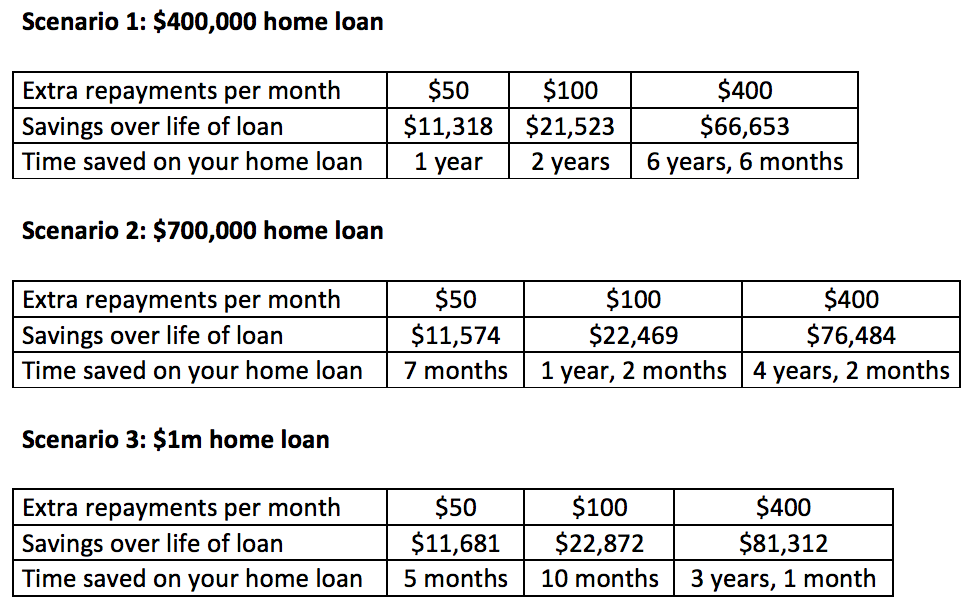