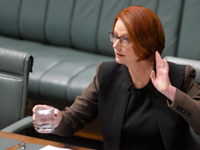 Why I admire Julia Gillard

Julia Gillard has now been three weeks out of the office of prime minister which she held for three years and three days, from June 24, 2010 to June 27, 2013. Labor’s hero, Gough Whitlam, held that same office for only two years, eleven months and seven days.â€¨ â€¨

Now that she is out of office let me confess my admiration for Gillard. It is true that from September 2011 I was often predicting that Labor could not win another election under her leadership but I always said and wrote that with regret, never with pleasure.â€¨

I am struck by the number of people who say they feel sorry for Gillard. I do not. I admire her, I voted for her but I do not feel sorry for her. She made her bed and she lay upon it and we should never feel sorry for someone who rose to the highest office in the land, won a general election, and governed the country for a full parliamentary term, technically known as the 43rd Parliament.â€¨ â€¨

Actually I felt a certain sense of relief for her when she was dismissed by the Labor caucus. Her admirers can now insist that she was never kicked out of office by the Australian people.â€¨

I have no admiration for the two men who now compete for her former job. Both deserve to lose and I shall certainly feel no sympathy for he who does lose.â€¨

I take the case of Kevin Rudd first. In my early-July article for this website I wrote that “Rudd is a gutless wonder”. That was a reference to his behaviour on the day he lost the prime ministership in June 2010. Knowing that the caucus vote would have been 90 for Gillard and 22 for Rudd he chose to retire, rather than allow that vote to become public knowledge.â€¨ â€¨

I do, however, have one criticism to make of Gillard. There is no evidence that, at the time, she ever dissented from any of the poor decisions made by the Rudd Government.â€¨ â€¨

When I said the above things to Peter Switzer in his programme on the night of Wednesday, July 3, he did not ask me to elaborate but I have decided to do so none the less.â€¨ â€¨

Tony Abbott is a far more pleasant man personally than Kevin Rudd but he has, essentially, the same character. He will never try to do anything that might be at all difficult to do.â€¨ â€¨

Both Rudd and Abbott are essentially cynical, hypocritical, dishonest and deceitful.â€¨ â€¨

When I appeared on Peter’s programme on Wednesday, July 3, I predicted that the election would be held on October 12. I feel I should elaborate on that prediction.â€¨

The election may be held on August 31 – but that would mean an Australian government in caretaker mode when the mid-August conference in Indonesia is held on people smuggling.â€¨ â€¨

Polling day could be September 7 – but that would clash with the G20 meeting. Rudd has already ruled out September 14 (Gillard’s chosen date) because it clashes with Yom Kippur, the holiest day of the Jewish calendar.â€¨ â€¨

September 21 and 28 and October 5 clash with football finals and grand finals.â€¨ â€¨

October 19 is Caulfield Cup Day and October 26 is altogether too late. It would make it appear that Rudd was clinging to office to the last.â€¨ â€¨

No objection can be raised against October 12. Therefore, that is the day I recommend to Rudd – and it remains my prediction also.â€¨ â€¨

The feature in common between the two preceding sentences is “two others”. The seats I have in mind are Kennedy in Queensland (Bob Katter) and Denison in Tasmania (Andrew Wilkie).â€¨ â€¨

A Newspoll was published in “The Australian” on Tuesday, July 9. It showed the result as 50-50 in two-party preferred terms. However, when I disaggregated that result by state and by seat it translated into 78 for the Coalition, 70 for Labor and two others.â€¨ â€¨

Then a Neilsen poll was published in “The Sydney Morning Herald” (and other Fairfax papers) on Monday, July 15. It too showed 50-50. However, when I translated that into seats I had 80 for Labor, 68 for the Coalition and two others.â€¨ â€¨

Should readers be surprised by this let me list the seats.â€¨ â€¨

For the Coalition I have the Liberals gaining three seats in Victoria (Corangamite, Deakin and La Trobe) and the Nationals gaining two seats in New South Wales, Lyne and New England.â€¨ â€¨

For Labor I have seven gains in Queensland (Bonner, Brisbane, Dawson, Flynn, Forde, Herbert and Longman) and three in Western Australia (Canning, Hasluck and Swan).â€¨

That the current polls are so close does not ensure a close result in seats in the House of Representatives. A serious campaign mistake by Abbott could give Rudd a landslide win – and vice versa. The reason is that there are so many marginal seats.â€¨

So I conclude by saying I confidently predict there will be a result – and that result will lie somewhere in a range between a landslide to Rudd and a landslide to Abbott.â€¨