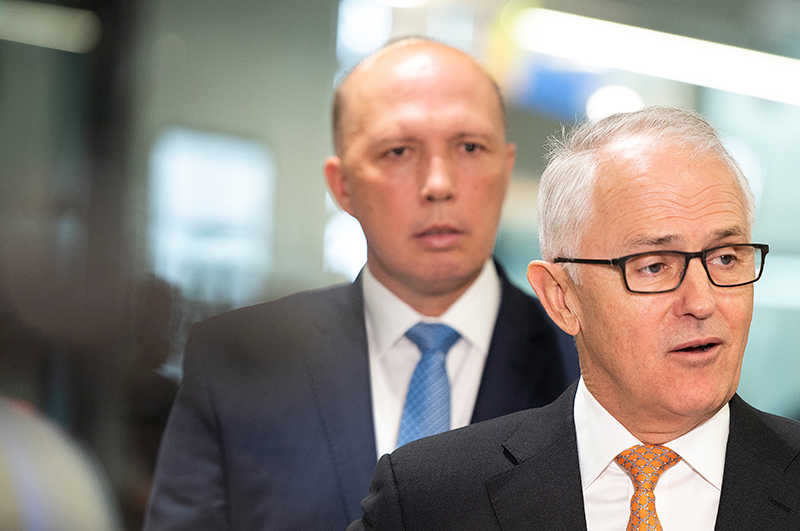 Who should lead the Liberal Party into the next election?

During the three years that Malcolm Turnbull has been PM, I have had no conversation personally with him. I have, however, given him indirect advice through this website, through articles in The Canberra Times and by having private conversations with federal and state politicians and directors of the Liberal Party. My success rate has been zero.

In the first six months I advised them not to replace the second-worst-ever Senate voting system (the one which worked well during the years 1984 to 2014, inclusive) by the worst-ever Senate voting system, the present one. I advised them not to double dissolve the 44th Parliament but to have a conventional House of Representatives plus half-Senate election in November 2016. I told them of the lunacy of a two-month winter campaign.

The result is history, a Turnbull win so poor it strengthened the disruptive forces in the Coalition, Tony Abbott, Eric Abetz, Craig Kelly, Kevin Andrews and George Christensen. Added to that we have a Senate whose reputation as unrepresentative swill has been strengthened with Fraser Anning there on his 19 votes. I predicted Pauline Hanson’s election but I did not predict that of Anning. I did, however, assert that a result like that was entirely likely under such an outlandish system.

Since the 2016 election I advised the Liberal Party not to pester Labor Senator Katy Gallagher into testing her dual citizenship status before the Pharisees who disrupt the country from the ugly and grandiose High Court building by Lake Burley Griffin in Canberra. They rejected my advice, believing Gallagher’s loss in any case would spark off a Super Saturday of by-elections. They won that case before the High Court and proceeded to another two-month winter campaign in which they stupidly talked up their chances. I told them they would be done like a dinner – though I admitted all along that they might get an apparently decent result in Braddon - certainly not in Longman or Mayo.

Gallagher took all reasonable steps to renounce her British citizenship and will return to the Senate triumphant at the next election, whether it be in October, February or May. Meanwhile she is enjoying her schadenfreude knowing she will be a cabinet minister in any Shorten Labor government – along with Andrew Leigh, another Canberran.

For the Liberals to talk up their chances on Super Saturday was the most incredible folly I have ever seen in my 60 years of watching Australian elections. It meant that a wholly predictable set of results, including a decent result in Braddon, is viewed as a massive failure, emboldening the Abbotts and Shortens of this world.

So let me give another piece of advice to the Liberal Party. Keep Turnbull. With their record they will, I suppose, reject my advice again. It would do them no good.

I have only ever once had a conversation with Peter Dutton. I developed a personal liking for him for one reason only. It became clear that he is a fan of mine! However, if he thinks he will win Dickson at the next election he should think again. He would be better off losing Dickson as a mere Cabinet Minister than losing it as Prime Minister.

There has been a minor boundary change to Dickson in the redistribution. A slice of Liberal-voting territory in Bridgeman Downs and McDowall has been added to the current seat. The numbers are 100,974 for the existing Dickson plus 3,873 for the added territory, making a total of 104,847 electors in the new Division of Dickson. Labor now needs a swing of an even two per cent, not the 1.6 the media are quoting.

The truth is that all these minute calculations will make no difference. He will lose Dickson. The Liberal Party would save more pieces of furniture by retaining Turnbull as their leader.