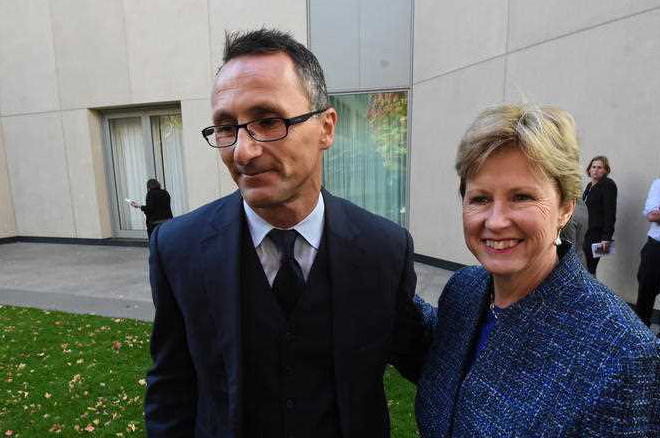 Readers may be interested in my thoughts on Christine Milne and Richard Di Natale, but before I give them I feel I should set out my attitudes towards the Greens in general. Of the four main parties in Australia (Liberal, National, Labor and Greens) the Greens are the party to which I feel the least close. However, I did vote for a Greens politician seven years ago and I do tell friends that if I had been an elector of a state I would have voted for one of their senators at recent elections. The senator in question is not Sarah Hanson-Young.

My main comment on Milne is to note the sheer brilliance of the way in which she executed the leadership transition. The party gave her the successors she wanted and it was done with a minimum of rancor. That requires political and personal skill but, of course, it can only be done in a small party. I believe that Hanson-Young, Adam Bandt and Lee Rhiannon are feeling annoyed at what has happened but they would not show their annoyance.

There is no doubt that Milne has been a very successful leader. However, in saying that (and not for the first time on this website) I cannot help but note her extraordinary luck in that she could get commentators to say that. The vote for the Greens in 2013 was down by a third compared with 2010 so it is pure luck that she can say (correctly) that the Greens are at their greatest federal parliamentary strength. That luck comes in two forms.

First, there is the rotation of senators. Since the Greens had three senators elected in 2007 and four in 2013 she can say that her 2013 result was the second best ever for her party, producing their biggest parliamentary party ever. Second, it was luck (combined with the skill the Greens have in gaming the system) that Hanson-Young could be re-elected with less than half a quota in South Australia and Scott Ludlam could be re-elected with less than two-thirds of a quota in Western Australia. But the greatest piece of luck for Milne was the fact that there needed to be a re-election in WA which gave Ludlam a degree of legitimacy for which the Greens crave. It is a fact that both Di Natale in Victoria and Ludlam in WA owe their most recent election to having received a first-preference quota. In other words two of their three leaders did not require preferences for their most recent election.

I have known Milne since 1991 when she was a member of the Tasmanian House of Assembly. I have had six conversations with her, the first in Hobart and the rest in Canberra. I believe those conversations were very helpful for both of us and I can tell readers that she is a very pleasant woman to know.

As readers would know I have a bee in my bonnet at the moment. It is on the subject of reform of the Senate electoral system. Consequently I have sought conversations with politicians. There are three Greens politicians with whom I have had such conversations recently. They are Senator Rhiannon, Senator Di Natale and Victorian state leader, Greg Barber, MLC. None of the three were open to my persuasion but I did notice a different tone to their dissent. Whereas Rhiannon and Barber were friendly and respectful Di Natale was anything but. He denounced me to my face in the presence of others. In effect he said that any electoral analyst who favours the continuation of group voting tickets is a disgrace. Consequently, if any Victorian voter asks me for advice in 2016 I shall not advise a vote for Di Natale, though I have to say I expect his re-election.

All of which brings me to comment on the widespread view among commentators that Tony Abbott will find Di Natale more co-operative than Milne. Do not believe it. Anyway, we know from comments of Milne and Larissa Waters that the Greens under Di Natale will be just as opposed to any increase in fuel excise as was Milne. That is the kind of reason why I noted above that the Greens are the party to which I feel the least close.

How successful will Di Natale be as leader? The only thing I can say is that I do not expect him to have Milne’s luck. Whereas the rotation of senators worked in Milne’s favour it will work against the new leader. I say that because 2010 was, by far, the best ever performance for the Greens. They won six Senate seats and Melbourne in the House of Representatives. My prediction is that Bandt will win Melbourne again in 2016 but only four of their six senators will be re-elected. The four re-elected I predict to be Milne’s replacement in Tasmania, Di Natale in Victoria, Waters in Queensland and Rachel Siewert in WA. I expect Rhiannon in NSW and Penny Wright in SA to be defeated. Their seas were taken from Labor in 2010 and will go back to Labor in 2016. Consequently, from July 2017 the Greens will no longer be able to claim their biggest-ever federal parliamentary party. That claim will remain as one of the successes in the legacy of Christine Milne.

(Malcolm Mackerras is a visiting fellow at the Australian Catholic University’s Canberra campus.)