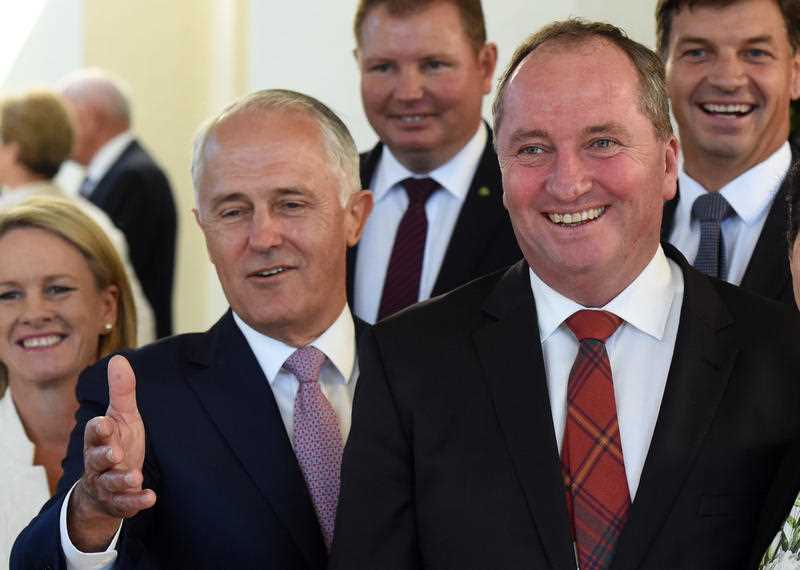 The most significant feature of Malcolm Turnbull’s recent ministerial reshuffle is the fact that the number of Nationals in the cabinet has increased from three to four. In Tony Abbott’s first cabinet there were three Nationals in a cabinet of 18 men and one woman, total 19. The three Nationals were Warren Truss (Queensland), Barnaby Joyce (from Queensland and northern New South Wales) and Senator Nigel Scullion (Northern Territory). Joyce has the unusual distinction of being a Queensland senator (from 1 July 2005) and then being elected as the member for New England at the 2013 general election for the House of Representatives.

In the new Turnbull cabinet of 22 members (16 men and six women) there are four Nationals, Joyce, Senator Fiona Nash (New South Wales), Scullion and Darren Chester who is member for Gippsland in Victoria. He was not previously in the ministry but was a parliamentary secretary. That means he moves from the backbench to the frontbench. Queensland is not over-looked. Rockhampton-based Senator Matt Canavan becomes Minister for Northern Australia. He shares his new role with Liberal cabinet minister Josh Frydenberg.

The successes outlined above come after the 21-strong parliamentary party of the Nationals chose Joyce unopposed as leader and Nash as his deputy, she contesting in a field of seven candidates. That choice was made on the night of Thursday 11 February. Joyce and Nash have an interesting feature in common. They both took their seats in the Senate on 1 July 2005, having been elected at the October 2004 election. There was an interesting difference. Nash was generally expected to be elected as she was third on the NSW joint Coalition ticket. By contrast, only one pundit predicted the election of Joyce on the separate Queensland National Party ticket. I was that pundit. The general expectation was that the Liberal Party would win three places and Joyce would miss out. That he won in addition to three Liberals gave John Howard his much-yearned-for Senate majority.

Truss was a good team player and is a very nice man – and a competent minister also. He had his successes and one conspicuous failure. Ian Macfarlane is his name. For details on Macfarlane see the second and third last paragraphs of my article, My key predictions for 2016. However, Truss did not have the makings of a truly successful leader. In my opinion Joyce has those makings. He is certainly their best leader since Tim Fischer who held the job from 1990 to 1999. In between Fischer and Truss were two more-or-less failures, John Anderson (1999-2005) and Mark Vaile (2005-07).There is, however, a difference between Anderson and Vaile. Anderson left politics with the good will of his party. Not so Vaile. Motivated by greed he threw away his seat of Lyne by resigning and creating a by-election (held in September 2008) which was sure to be won by Rob Oakeshott who won again at the August 2010 general election. Consequently, during the 43rd Parliament (2010-13) Lyne was, in effect, a Labor seat.

So supporters of the Nationals are feeling pretty pleased with life at present, particularly as they have re-gained both Lyne and New England! However, certain points should be noticed. The first is made by looking at the distribution of seats in the last Howard cabinet of 18 members. There were 14 Liberals and four Nationals. They were Anderson, Vaile, Truss and Peter McGauran, member for Gippsland and Chester’s immediate predecessor in that seat. So, all the Nationals have now achieved is to restore to themselves (more or less) the same position under Turnbull they last enjoyed under Howard.

The next point I make is to compare the size of the present Nationals caucus to that prevailing as a result of the general election for both houses following the 1987 double dissolution. At that election they won 19 seats in the House of Representatives and seven in the senate. So they had a caucus of 26 members compared with the present 21, being 15 representatives and six senators.

Then there is the declining vote for the Nationals. Their percentages for the House of Representatives have been 11.5 in 1987, 8.4 in 1990, 7.2 in 1993, 8.2 in 1996, 5.3 in 1998, 5.6 in 2001, 5.9 in 2004, 5.5 in 2007, 6.3 in 2010 and 6.8 in 2013. When I quote  these statistics to my friends in the Nationals their usual response is to ask  how I can have statistics for 2010 and 2013 given that their caucus includes members and senators from Queensland and the Northern Territory where there are amalgamated conservative parties, Liberal National in Queensland and Country Liberal in the territory. The answer I give is to show a table adding their actual votes in New South Wales, Victoria and Western Australia to the Queensland  and Northern Territory votes for candidates who joined their caucus in Canberra. The bottom line is completed by adding votes for their Queensland and NT unsuccessful candidates who would have joined their caucus in Canberra if elected. Thus the vote for the unsuccessful LNP candidate in Kennedy (won by Bob Katter) is added as well. That, I submit, gives a reasonable percentage, comparable with earlier elections.

While other pundits have forever been predicting gloom and doom for the Nationals I was never one of those observers. That is why I am unique to be able to claim that every prediction I have ever made about Barnaby has proved correct. A city slicker I am but I have always been impressed by the ability of the Nationals to represent a significant minority view in this country. One detail, in particular, about them impresses me – and it lies in my special area of expertise. These days they always show good judgment when electoral matters are discussed and they are always successful in their redistribution proposals. Bearing in mind the incessant pundit talk about the population decline of their base it is remarkable how they can keep their seats – and regain them when lost! The recent redistribution of seats in New South Wales is a good example. The Liberal Party was displeased with the outcome but the Nationals were smiling – and still are.

My next contribution to this website will be on the Greens, the left-hand equivalent of the Nationals on the right. The Greens were a de facto coalition partner in Julia Gillard’s minority Labor government. Most observers still see them as that today. The Greens are the fourth biggest party in terms of federal parliamentary seats but, on every way of measuring it, they are the third biggest in votes which in 2013 were won in this order: Liberal, Labor, Greens and Nationals.