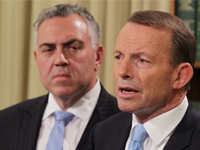 A clever political trickster is our Tony Abbott

My first comment is on the date for the election. In my second article for this website (Why I admire Julia Gillard, July 18) I gave details of all the possible dates and concluded the election would be on October 12. I had made exactly the same prediction when I appeared on SWITZER on the night of July 3. I had every reason to believe that was Kevin Rudd’s intention at those times. Essentially it was because he was willing for the Parliament to resume meeting on August 20. Sittings were, in fact, scheduled for the last two weeks of August.â€¨

However, when I appeared on SWITZER on July 29, I explicitly changed my prediction. The Parliament would no longer meet again, I asserted, and the election would now be held on September 21. Anyway, Rudd has now brought the election forward yet again – to September 7. That surprised me. I had thought Labor was committed to the local government referendum but, for the sake of two weeks, that has now been abandoned. My explanation for this bringing forward of the election date is that I believe the Papua New Guinea Solution on boat people, and its Nauru annexe, will collapse. So, he decided to get the election over and done with before these facts become too obvious. I have more to say on this subject below.â€¨ â€¨

I had an article published in The Australian newspaper on August 5 and it included my Mackerras pendulum. The article (titled Still a Wide Open Race) was mainly a description of how the pendulum operates. I refused to make a prediction there – so I shall make it here. I am predicting there will be 81 Coalition seats (67 Liberal, 14 National), 66 for Labor and three others. That would mean the Abbott Government would have an absolute majority of 12 seats.â€¨ â€¨

In my July 24 article, after explaining why I admire Gillard, I wrote of our two current leaders thus: “Both Rudd and Abbott are essentially cynical, hypocritical, dishonest and deceitful.” I feel I should elaborate on that opinion. For the time being, however, I shall leave Rudd alone because I give him very little chance of remaining prime minister beyond September. Should any reader really want to know I suggest you watch The Bolt Report on any Sunday.â€¨ â€¨

In the case of Tony Abbott I could take his stance on any number of subjects but today I choose boat people, since they seem to be his main concern. To me it is quite fair to say that the policies of the Howard Government on that subject were based on the principle that “the end justifies the means”. However, while I can see why so many people object to that principle, it could at least be said in Howard’s favour that the principle, and the policies, worked.â€¨ â€¨

After Howard’s defeat the Coalition went into Opposition and had to work out new principles to deal with the fact that the first Rudd Government had dismantled Howard’s Pacific Solution. Under Abbott’s leadership I think it is fair to say that the first principle has been “the more boats the more votes for us” and the second principle has been “our right to gloat at Labor’s expense must be allowed to prevail over every other consideration.”â€¨

Morrison declared that the proposal would fail and Abbott said: “If you have Nauru you won’t need Malaysia”. I could see in their eyes what they were really thinking. They did not fear that the Arrangement with Malaysia (as it became known officially) would fail. Their real fear was that it would succeed! I could hear them saying to each other something which some of my Liberal friends were willing to say to me, namely: “Our slogan to stop the boats was our most valuable slogan in the 2010 election campaign. We are not going to let that bitch stop the boats. We are not going to let her steal our most valuable slogan.”â€¨ â€¨

Abbott developed the habit of declaring the Malaysia Solution as “a dud deal” – citing the fact that Australia would take 4000 genuine refugees while Malaysia would take only 800 asylum seekers. There was no logic in such a ridiculous charge but Abbott was not interested in logic. His statement sounded OK to the ignorant masses. He then hoped the High Court would declare offshore processing illegal, which it duly did in its infamous majority judgment handed down on August 31, 2011.â€¨

During the period of five months when the Arrangement with Malaysia was being negotiated I was not the only commentator to urge the Coalition to support labor in this. Paul Kelly and Greg Sheridan also did that. So, too, did the editorials in “The Australian”. However, Abbott’s principle that “the more boats the more votes for us” prevailed. Any self-respecting federal parliament would have amended the Migration Act in September 2011 but Abbott was not about to let the Gillard Government stop the boats. So Abbott invented a new principle – that offshore processing should apply only to countries which were signatories to the UN Convention on Refugees. That was done eventually which is why Nauru and PNG are now the countries which house Australia’s offshore processing centres.â€¨

The best illustration of Abbott’s hypocrisy is the way he engages in what I call “pretend consistency”. In this case I am referring to the Coalition’s proposition that it has been consistent. So I ask them this question: did the Howard Government seek to ask Nauru to become a signatory of the UN Convention when it dumped refugees on Nauru back in 2001? Of course not! This new principle of Abbott’s was concocted purely to embarrass Gillard – in which, of course, it has succeeded. He is a clever political trickster our Tony Abbott.â€¨

Legislation to circumvent the High Court’s decision passed the House of Representatives in June 2012 by the customary two-vote majority – except it was not the customary vote. Adam Bandt voted with the Coalition but Bob Katter’s vote gave Gillard the numbers. It went to the Senate where the vote, on June 28, 2012, was 39 votes against to 29 in its favour. The 39 votes were made up of senators from the Liberals, Nationals and Greens. The 29 votes came from Labor plus John Madigan of the DLP and Nick Xenophon, Independent.â€¨ â€¨

As is well known Abbott succeeded in humiliating Gillard. The Migration Act was amended to enable Nauru and PNG to be given the OK. They were willing to sign up to the UN Convention. Malaysia, not being a hypocritical country, has not done so. They thought they had done Australia enough of a favour already. So the boats kept coming, exactly as Abbott and Morrison had planned, and the Arrangement with Malaysia has become a dud deal. Australia is taking its 4,000 genuine refugees from Malaysia, a country which is quite happy to keep its side of the bargain. Its problem is that a majority Australia’s federal politicians will not allow Malaysia to keep its commitment. How they must laugh at us.â€¨ â€¨

As I indicated above the hypocritical Rudd will not stop the boats. That is why he is having this election early – before people see through his plans. Abbott too will not be able to stop the boats – and he will have only himself and his trickery to blame. Should anyone think I am the only commentator to say this let me quote Sheridan again. Writing in The Weekend Australian for July 20 this year he opined: “More recently, the government could not craft its Malaysia solution, sending boat arrivals to Malaysia, in a way that would satisfy the courts, and it could not pass its amending legislation in parliament. The refusal to pass this legislation is Tony Abbott’s worst decision in politics.”â€¨ â€¨

Two days later, on Monday July 22, Sheridan wrote in an article on the Arrangement with PNG titled Don’t demonise a sensible, hopeful plan this paragraph: “But there is a real danger for the opposition in Rudd’s new policy. Tony Abbott and his team must not demonise this hopeful, sensible policy in the same wickedly irresponsible way they demonised the Malaysia people swap deal. To do so would be not only to damage the Rudd government. It would also profoundly damage Australia’s core national interests.”