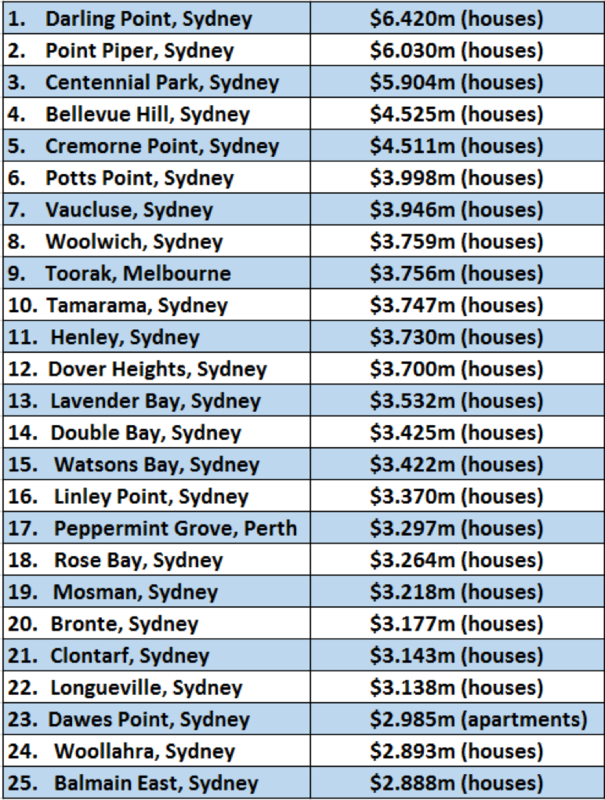 During my 30 years in real estate, Iâ€™ve seen a lot of changes in the marketplace.

As a young agent in Sydney back in the 1980s, if I was dealing with a millionaire client, I was dealing with someone from the upper echelon of society. Some type of high-profile businessperson, investor, or someone with family money.

Today, in most cases, one million dollars is the typical budget for a family home. And according to new statistics, itâ€™s also the median price in 613 suburbs nationwide.

They looked at the median sale price of every suburb across Australia and found that there were 613 suburbs with a median value of at least $1m â€“ more than double the number of suburbs in 2013 and 29% more than last year.

What happened? Well, a boom happened. A massive one. In fact, the latest numbers put the increase in property values over the past four years since this current growth cycle began at 61.3% for Sydney, and 42% for Melbourne.

Tasmania remains the only state with not a single suburb median above $1m. No wonder theyâ€™re getting more enquiries down there from Sydney and Melbourne downsizers who are keen to escape the expensive capital cities for gorgeous scenery and a cooler climate.

In terms of the states with the highest number of $1m suburbs, of course New South Wales leads with 418, followed by 102 in Victoria, 44 in Western Australia, 19 in Queensland, 15 in South Australia, 12 in the Australian Capital Territory and three in the Northern Territory.

Letâ€™s take a look at the Top 25 suburbs with the highest median prices in Australia. Only two are outside Sydney â€“ Toorak in Victoria and Peppermint Grove in Western Australia.

To round out the national picture:

CoreLogic also tells us that the number of homes selling for $2 million or more is on the rise.

So what does all of this mean?

On the one side, thereâ€™s the affordability issue â€“ yes, itâ€™s getting worse in Sydney.

On the flipside, the rising number of million dollar suburbs means rising wealth for home owners. So in my mind, being a property owner certainly has its rewards.