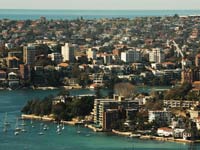 It’s certainly been one of the most exciting years we’ve had in Sydney over the financial year 2014, with the market recovery well underway and good activity in all price brackets.

New momentum is also occurring in Queensland, particularly Brisbane and the Gold Coast, with the strength of the Sydney market beginning to have an effect as priced out buyers look for other nearby markets offering better value.

The Sydney market went gangbusters in the final six months of 2013, with a record-breaking Spring season accelerating price growth for the 2014 calendar year to 15.2 per cent for houses and 11.6 per cent for apartments. The greatest activity remained in the sub-$2M bracket due to strong investor and upgrader activity.

The first six months of 2014 saw the buying frenzy under $2M continue, with a slight tapering after Easter. Year-to-date, median prices are up a very healthy 5.7 per cent for houses and 4.6 per cent for apartments, according to RP Data’s end-of-financial-year report. Attach Existing Assets

My instinct is we are starting to reach a point in Sydney where buyers are feeling concerned about paying too much. We’re still seeing instances of very strong auction activity, but I’m increasingly hearing about campaigns with lots of groups through the opens and lots of contracts issued, but only a few bidders competing on the day. This tells me there is some caution entering the sub-$2M market.

That doesn’t mean price growth is about to stop. Most likely we are entering a period of stabilisation, which is a really important step in a new growth cycle. Trust me, you want to see some plateaus when prices are growing this fast. People need time to get used to new values before growth begins again. That’s how growth cycles work. We’re into Winter now where we always see a drop in stock, so price growth might taper temporarily, with prices perhaps going a bit higher during Spring.

Sydney’s Saturday clearance rates are holding steady in the 70 per cent-range, which is a drop compared to the consistent 80 per cent-plus clearances recorded in Autumn. It’s no cause for concern as 70 per cent-plus is still very strong, particularly when you take into account the high number of auctions occurring in Sydney right now – we’re talking more than 2,500 in the month of June alone.

One of the biggest changes in the market this year is movement in Sydney’s prestige sector. We saw a few big sales here and there in 2013 but there is actual momentum in prestige property this year. Financial executives are receiving bonuses again, the share market is doing well and more listings are coming onto the market, giving buyers more choice and creating a bit of excitement. The biggest sale in Sydney so far this year occurred last month at around $37M in Wolseley Road, Point Piper.

The Chinese remain major players in Sydney’s prestige market and we’re also seeing ex-pats back in the mix.

South-East Queensland’s recovery is off to a much slower start than Sydney.

RP Data recorded 5.3 per cent growth in Brisbane house prices for the 2013 calendar year, with apartments up 3.5 per cent. In 2014 year-to-date, house prices are up 2.3 per cent and apartments are up 1.7 per cent. So we’re seeing the market move in a positive direction but there’s certainly no frenzy as yet.

Investor interest in Queensland is on the rise, with evidence that more southern buyers are leaving Sydney and Melbourne in favour of Brisbane, the Gold Coast and other major regional centres.

Australia’s largest mortgage broker, AFG reports a slight drop in loans to investors in New South Wales this year from a peak of 53.4 per cent in January to a still impressive 45.9 per cent in June, while loans to investors in Queensland have increased from 33.5 per cent to 38.7 per cent over the same time period. â€¨
Our agents on the ground in Brisbane, the Gold Coast and in regional hot spots such as Toowoomba and Townsville report more investor activity from both locals and southerners in 2014. Finally, the value on offer is being recognised, with Brisbane’s median house price year-to-date at $480,000 compared to Sydney’s $800,000; and apartments at $385,000 compared to Sydney’s $586,000.

I think Brisbane offers more opportunity for capital gains in the near future, with yields across many Queensland markets pretty close to cash flow neutral and even positive in some cases. As Sydney home prices rise, investors are seeing reduced yields which is making Queensland more attractive.

The Gold Coast market is well into the beginnings of its recovery but there’s still a long way to go. Major new infrastructure including the Gold Coast Light Rail, the new Gold Coast University Hospital and the continuing development of Southport CBD is prompting more activity driven by local upgraders, southern investors and southern downsizers seeking a lifestyle change.

Similar situation on the Sunshine Coast, with new infrastructure and an increasing number of new jobs associated with the Kawana Health Campus development prompting new demand for real estate.

At its most recent monthly board meeting, the Reserve Bank decided to keep interest rates steady for the 10th consecutive month. Record low interest rates will continue to be a major driver of the property market recovery. Money is so cheap right now and this presents an amazing opportunity for today’s buyers.