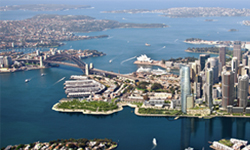 I am really excited about what’s happening on the harbourfront at Barangaroo in Sydney. This $6 billion development is going to change the face of Sydney’s CBD and create a world-class financial services hub for the Asia-Pacific region.

Westpac is the first major tenant and will occupy the bulk of the first of three commercial towers currently under construction. The difference between these towers and those in the CBD is the floor space. Financial companies need more space due to the pace and complexity of their transactions and the large number of people that need to work together in-person every day.

It’s also going to be a major tourism centre for high net worth Asian visitors, with a $1.4B VIP casino and luxury hotel proposed by James Packer’s Crown Casino.

Barangaroo will create 6,000 new jobs, be a workplace for 23,000 people and will be home to up to 1,500 residents living in 800 stylish apartments that will have some of the best harbour views in Sydney.

This isn’t a bad thing as there are plenty of buyers who are keen to live in Sydney’s CBD. Executives love new apartments and living in the CBD means they’re close to work as well as all the great entertainment and lifestyle amenities the city has to offer.  Downsizers are a group of buyers increasingly heading to the CBD, as many Sydneysiders refuse the seachange option in favour of New-York style living close to all the action.

Anyway, for those of you in Sydney who don’t know much about Barangaroo – as well as my readers from outside Sydney, I thought it was worth writing about given it is one of the most ambitious and significant waterfront redevelopments anywhere in the world right now.

This is really going to advance Sydney’s standing as an international city and all the new tourism dollars it will create will likely benefit other areas, as Asian visitors venture outside Sydney to see what else Australia has to offer.

So, in short, Barangaroo is a 22 hectare waterfront area on the western edge of Sydney CBD. It’s a former container port that has not been accessible to the public for more than a century.  Now we’re getting it back.  Barangaroo will be a combined commercial, retail and leisure precinct, with the first section due for completion in 2015.

One of the coolest things about Barangaroo is its plan to be Australia’s first large-scale carbon neutral community – in fact, the aim is to make it the first of its size in the world to be ‘climate positive’.

Sustainability has been a major factor in the masterplan, which includes a harbour cooling system, a recycled water service that will deliver 60 Olympic pools of recycled water to the CBD per year; a waste recycling service; and 6,000 sqm of solar panels.

More than 50% of Barangaroo will be public space and there will be free wi-fi throughout.

About 23,000 people will live and work at Barangaroo once it’s completed, and 33,000 will visit it every day. The aim is to have 96% of visitors using public transport, including walkways, cycleways and a major pedestrian link from Wynyard station, which will also open in 2015.

Barangaroo is divided into three areas:

Combining commercial, retail and residential elements, Barangaroo South will be Sydney’s most desirable place to work and live. The 800 apartments and three commercial towers will be in this precinct. KPMG and Lend Lease will move into the second building in 2016.

Along with plenty of great cafes and premium restaurants, the retail area will include all the essentials such as banks, newsagents, florists, dry cleaners, a medical centre and child care.

Spanning six hectares with a continuous waterfront promenade, Headland Park will offer an incredible leisure spot for morning runs and lunch breaks during the week and picnics and afternoon strolls on the weekends. It will be full of native plants – in fact, 70,000 of them, and will be edged in original sandstone excavated from the site. It will have plenty of walkways throughout and an 18,000 sqm cultural space as well.

Formerly home to the temporary Cruise Passenger Terminal, which has been relocated to White Bay, Central Barangaroo is now ready to be developed. Its identity is yet to be established but preliminary plans include large public spaces, cultural and civic components and further commercial development.

If you want to learn more about Barangaroo, check out the fact sheets, artists’ impressions and videos at www.barangaroo.com. The entire redevelopment will be complete in 2025.