There are many different methods used in an attempt to model both â€œfair valueâ€ and â€œfuture valueâ€ of the Aussie dollar.

Future of the Aussie dollar - the long and short of it

There are many different methods used in an attempt to model both “fair value” and “future value” of the Aussie dollar most of which are very rarely that accurate, or useful for that matter. Not that useful because the goal posts are always moving as new information comes to hand and so the valuations are always changing.

In foreign exchange people often talk about the market being “long” or “short”. For many people familiar with investing in stocks the idea of having a short position can be relatively foreign but this is very common in the FX market. To be "long" refers to having already bought a currency which means you are a potential seller whilst to be "short" means you have sold first and are a potential buyer.

Aussie Dollar Futures on the CME

A contrarian with the view that the market is short AUD/USD might decide to buy Aussie dollars and sell US dollars. But how can one form such a view? This is rather difficult given FX markets are traded Over The Counter (OTC), meaning there is no one central exchange for currencies like there is on the ASX for stocks.

Currency Futures however have been traded on a regulated exchange, the Chicago Mercantile Exchange (CME), since 1972. One can buy or sell an Aussie dollar futures contract (AUD/USD) providing the market with visibility on the overall futures market position. The chart below shows the net futures positions on the CME against the value of the AUD/USD exchange rate. Net positioning refers to the difference between open long and short Aussie dollar futures contracts.

Since around the middle of 2013 futures traders carried net short positions. This was due in part to the bearish outlook for Australian interest rates and the Aussie dollar. So speculators were short in anticipation of more downside on the AUD/USD and short they were in a big way with almost 80,000 more open short contracts than long ones in July when the exchange rate was near 89 US cents. 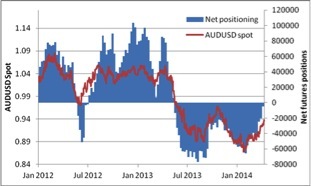 The contrarian investor over this period would have gone long AUD/USD on the view that the short Aussie trade was overcrowded. If new information comes to hand contrary to what’s already known, that points towards a higher Aussie dollar, then these short positions would need to start buying to exit their trades hence pushing the rate higher.

As history shows us once the RBA moved their monetary policy stance to a neutral rate setting, the market started to cover their short positions triggering a rally in the Aussie dollar. It is evident on this chart the correlation between Aussie dollar futures net positioning and the AUD/USD exchange rate is quite high at the moment.

Since this chart was released late last week the net positioning has, for the first time in 11 months, moved back into positive territory meaning there are now more long AUD futures positions than short ones.

Jim Vrondas is Chief Currency strategist, Asia-Pacific at OzForex, a global provider of online international payment services and a key provider of Forex news. OzForex Group Limited, is a publicly listed entity with shares traded on the Australian Securities Exchange under the code "OFX".