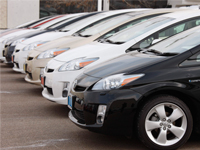 Well if ever you need evidence that the stockmarket really is not much more certain than throwing your money away at the track, you only need to look at the debacle over McMillan Shakespeare shares.â€¨

Just to recap, the listed salary packaging company was suspended last week because of uncertainty over the government's new FBT rules on leased cars which would affect their business. The fact that the Rudd announcement is in the never never, as in after an election they have a strong chance of losing, appears to mean little.â€¨

When the shares were finally re-listed Thursday, they plummeted some 50 per cent wiping half a billion dollars off the company's value. Just hold on a minute here. Firstly why were they re-listed given no one has a clue what's going on? Yes this is a policy announcement that might happen after an election Labor might not, no probably won't, win. Changes are not proposed to be made before the election as parliament isn't sitting. The Opposition has said it won't implement them ever; so it's a very long shot. That didn't stop the market over-reacting of course. Facts, don't let them get in the wayâ€¨.

And as one broker pointed out, the company is not doing itself any favours by suspending all communication with the market, analysts, its own shareholders and the media until the situation becomes more clear. That would be after an election who knows when.â€¨

So my question again: how could the bozos at the ASX re-list the shares in this environment? A scandal, a disgrace and an informed market, my foot.â€¨

Worst of all, in light of all that, does the share plunge indicate the market actually thinks Labor will win? Spare me.