On the campaign trail 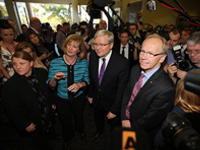 On the campaign trail

And so Week One continues on the election campaign trail with yet more promises and cash splashes and still not one convincing explanation on how on earth any of this is to be funded.

The best news of the campaign this week for me was Peter Beattie running for a Federal seat in Queensland. I've always admired him and bemoaned the fact he never moved to Canberra as I saw him having the appeal of a down-to-earth Bob Hawke type prime minister.

I'm not sure that move was in K-Rudd's original script. â€¨Now we have an even more popular Queensland Labor politician heading to Federal Parliament and one who actually ran something for some time without a full-scale revolt by his own troops.â€¨

But more, much more, than that, it gives the appalling Billy Shorten a run for his money. The thought that after Kevin comes Billy to run Labor to take it back to the bad old days of faceless men and factional manipulation was just too awful to contemplate. â€¨Not to mention he should not be rewarded for gross disloyalty, having orchestrated the Julia Gillard coup causing us years of misery then knifing her as well.â€¨

Let's hope if the ALP wins only one seat in Queensland it is Mr Beattie's one of Forde.