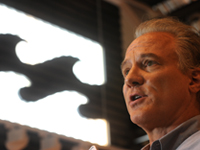 I told you last week those profit results currently bombarding us were a mixed lot; totally confusing even within one company as was the case of the Seven group yesterday.

Forget the increase in profit when you take in impairment charges, and all kinds of other accounting shuffles this year and last, the key figure was earnings outlook for the media group and it was depressing with a warning of a 40 per cent plunge in profits in the next financial year. This was blamed on downturn in media advertising among other things.

Let's put aside those who claim the world will turn on September 8, or at least the sun should come out with a new government. Seven doesn't even seem to be factoring in a short--term honeymoon bounce. But of more interest, what does this mean for the much hyped Nine Network float currently keeping some rapacious investment bankers in fees. I'll believe that one when I see it, as there was also a reminder yesterday from the United States about that impending crisis on their debt ceiling about to hit next month.

But the real shocker of the day to Billabong tripling its full year loss to close to $900 million prompting the headline that said its brands are now virtually worthless. This will be a telling business case study for future students me thinks and probably a good legal feast a lot sooner than that I should think.

There is so much more I could say but I don't want to give you too much to think about or you'll be just like the market and move on far too soon.