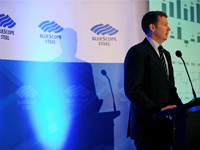 So here we are well into the bumper week of profit reports, some 70 are expected out over the course of the week, and it's already a mixed bag.

Let's take Tuesday for example and let's start with the losers – the ones that are reporting an actual loss and that would be McMahon, Arrium and Hills.

Then there are those who are reporting just a fall in earnings and they would incude RHG, Cocodan, QBE, BHP and CFS.

But it's not all bad of course, some companies are actually reporting an improvement in earnings. Those that saw a rise in profits include Invocare, Oil Search, Ansell, Sonic and Manadelpheous.

And despite the gloom some companies even set a new record – NAB and Cardno take a bow. See it's not all bad.

But the most disingenuous comment of the week so far goes to BlueScope's $5 million man Paul O'Malley who, after his company's poor performance with a loss and share slump, claimed the economy is actually in recession and is being masked by the performance of the two big miners and four big banks.

Yes Paul, that's why bank chiefs like Ian Narev earn the big bucks and makes you wonder why you are nearly in their pay league.