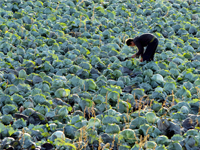 The power of natural plant chemicals

Our grandmothers and mothers always told us the vital importance of eating our vegetables. Evidence has accrued over the past twenty to thirty years of the vital importance of this message. Probably one of the most powerful group of vegetables are the cruciferous vegetables, which includes cabbage, cauliflower and broccoli. There are a number of different plant chemicals contained within these vegetables which are being increasingly shown to be extraordinarily beneficial for the health.

In 2006, a particular compound from the cruciferous vegetables known as indole-3-carbinol were shown to improve DNA repair in cells.

The most recent trial, albeit done in rodents, demonstrates yet another huge advantage of these wonderful natural chemicals. There is a particular compound found in cruciferous vegetables known as 3,3’-Diindolylmethane (DIM).

This new study performed in rats and then confirmed in mice, has shown that DIM may act as a shield to protect healthy tissue in cancer patients who are undergoing radiotherapy and may also reduce the side effects of any radiation.

This study basically exposed rats to a lethal dose of gamma rays and then gave a daily injection of DIM for two weeks. They compared this with an untreated group of rats who had the lethal radiation without any support.

All the untreated rats died but half the DIM treated animals were still alive after thirty days following the exposure.

The study was then repeated in mice and showed very similar results including the maintenance of all blood cell lines. You are probably aware that radiotherapy can cause significant damage to the bone marrow.

The theory is that this harmless substance DIM from cruciferous vegetables may:

Interestingly, it did not appear to matter whether the DIM was given 24 hours before or after the exposure.

In the meantime, my strong suggestions to all of you is to regularly consume a good dose of cruciferous vegetables because all aspects of health have been shown to positively effected by doing so.

More on your health: Measles and beyond