Oreo's are as addictive as cocaine 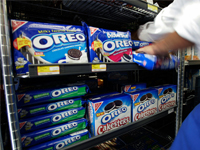 Oreo's are as addictive as cocaine

A recent study out of Connecticut has suggested that the famed “Oreo Biscuits” are as addictive as cocaine. This sensationalist comment has hit headlines all over the world as if it were gospel truth.

Professor David Katz, who, in my opinion, is one of the top experts on nutrition in the world, has made some  brilliant, cogent observations about the particular reporting of this trial.

He firstly makes the very important observation that, if this trial involved human beings and was a proper double-blind controlled trial where half were given Oreos and half cocaine on a chronic basis, their addictive potentials were measured and subsequently published in the New England Journal of Medicine or a similar journal with the accepted prestige around the world, then the information would have more creditability and be easier to accept. The reality here is that, rats were put into a maze and could either go for the Oreos, cocaine or morphine. The rat’s preferences were shared amongst the three and therefore the conclusion was that Oreos are just as addictive as the other two.

The study also showed that Oreos trigger a similar chemical response in rat brains compared with the aforementioned drugs.

Professor Katz then went onto say that we really have no idea of the affects of psychoactive drugs and the overall psychoactive experience in a rodent, who as far as we are aware, does not experience the same level of consciousness as human beings and thus may have little interest in pursuing the highs of addictive drugs.

Another important point here is that, this was only a one time use study. This means the levels of pleasure chemicals released in the rat was after only using one of three substances. There is no doubt even one off use of a substance such as cocaine may be harmful and morphine can certainly induce a respiratory arrest but the greatest risk for addictive drugs is repeated and increasing use.

It is a simple principle in life that the more you have of something, the more you need, whether this be food, alcohol, illegal drugs or possibly even money.

The definition of addiction is increasing use over time leading to cravings, tolerance and thus the need for increasing doses and a potentially devastating withdrawal syndrome that can at times lead to death without proper supervision.

Addiction is an unintended consequence of a system laid down to reward and encourage behaviours that foster survival i.e. food and sex which induce a pleasure response so that we eat to survive and have sex to procreate and maintain the species.

It is thus rather ridiculous to make any relationship between the addictive ability of junk food and mind-altering drugs.

Another important point that seems to be missed from this discussion is that, mindâ€‘altering drugs are used by a small percentage of society and, in my opinion, should stay illegal and never condoned by anyone.

We do have an increasing problem in society from the excessive use of junk food and with the growing rates of obesity in our community leading to all manner of health problems including cardiovascular disease and diabetes, we don’t need ridiculous trials on rats to tell us that junk food is harmful.  A few years back I wrote a book “Diets Don’t Work” and one of the chapters in the book was “Convenience is Killing Us”. I have no doubt that the quick fix solution often seen with many of these junk foods is definitely contributing to the growing rates of obesity, diabetes and cardiovascular disease we are now witnessing in our society.