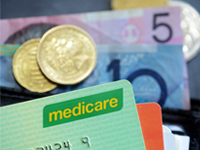 There have been recent rumblings from certain sectors in the Government and the expected scare mongering from the shaky opposition about changes in Medicare. I was on the Today Show the weekend before last with the excellent AMA President, Dr Steve Hambleton, discussing this very subject. To quote from a recent article on Medicare in news.com.au, Mr Abbott said “I want this Government to be the best friend that Medicare has ever had”. Despite the Prime Minister previously stating that nothing is being considered, nothing has been proposed, nothing is planned on GP co-payments, Mr Dutton the Health Minister said “a national conversation was needed on how to pay for rising health costs”. Mr Dutton said “many Australians already made a co-contribution on prescription medicines and private health cover, while others were already paying to see a GP”. He wants a discussion about whether people on “reasonable incomes” should expect to pay nothing when they go to a doctor. Labor leader, Bill Shorten said “Labor would fight any moves to dismantle Medicare”, and accused the Government of having a secret plan to introduce a new GP tax. Mr Abbott promised before the election “he would protect Medicare, but now he is trying to destroy our universal healthcare system”.  Mr Shorten said.

Well, Mr Shorten, I for one sincerely hope that our so called universal healthcare system is destroyed because it should not be there in the first place. The fore runner of Medicare, Medibank was created in 1972 when the conditions and standards in medicine were completely different. Now, 42 years on, we have a much larger and ageing population, medical technology and investigations are much more sophisticated and very expensive, pharmaceutical and other medical treatments are equally as draining on the healthcare budget.

Basically, Australia can no longer afford a universal healthcare system funded by Government. If I was running the show (and I promise you this will never happen) I would change the healthcare system in the following ways:

At present, there are people on a reasonable wage being admitted to public hospitals for elective procedures, displacing those who cannot afford private insurance and increasing waiting times for non-urgent, elective procedures. For example, there are many socially disadvantaged people or people on low incomes with severe hip pain who can wait a year or two for a hip replacement in a public hospital for this very reason. Some administrative staff in certain public hospitals encourage private patients to become Medicare patients to cut back on paperwork but also if a privately insured patient is admitted to either a public or private hospital, as a private patient, they are often out-of-pocket at times up to thousands of dollars depending on the length of stay and under my proposed system, this would stop.

Since the introduction of Medibank and then Medicare, a subsection of the Australian public has developed the attitude, that it is the Government’s responsibility to foot the bill for their health issues.

The reckless spending of previous Labor governments aside, if we don’t rethink healthcare funding, we will continue to see both the public and private hospital systems stretched to the limit, not to mention a topic for another article i.e. “The lack of funding and focus on preventative health” highlighted by Dr Steve Hambleton on the Today Show. As Albert Einstein so correctly stated, “we cannot solve our current problems with the same thinking we used to create them”.