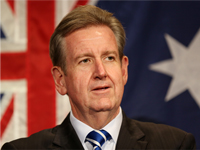 If I were Barry O'Farrell

Following the recent death of Daniel Christie and the prior death of Thomas Kelly, the New South Wales Premier, Barry O’Farrell, has introduced much tougher laws for alcohol related violence. Although I applaud the new laws and believe tougher laws were long overdue, it is my opinion these changes do not go far enough.

Firstly, there is no doubt that the problem is very much related to varying combinations of alcohol, illegal drugs (including anabolic steroids – yes, they are illegal), and let’s not forget the very legal energy drinks.

Secondly, focusing just on alcohol for the moment, the excessive availability and relative lack of expense means that many people (not just those that demonstrate aggressive, violent behaviours) are pickling not just their brains, but also the rest of their body with excessive doses of this well known cellular poison.

Mr Barry O’Farrell has introduced purely in parts of the central business district of Sydney and Kings Cross, a lockout at 1.30am and ceasing trade at 3.00am along with all bottle shops across New South Wales closing at 10.00pm. He has also introduced minimum mandatory sentencing for the following offences:

He has also introduced a number of secondary reforms I will not discuss here.

Come the revolution and I am running the show (and I can reassure you this will never happen as I realise that what I am suggesting is far too draconian), the following points would be my way of dealing with increasing problems of excessive alcohol and other substance abuse:

I know that I would have enormous objections from anyone involved in the alcohol and entertainment industries, but as far as I am concerned the death of young people or the permanent disability induced from all of the above issues has gone too far.

If people (especially the younger ones) can’t responsibly consume a few drinks, which it appears many can’t, then the rules around this need to be much more rigid and draconian. Enough is enough – how many more people have to be killed or permanently maimed?