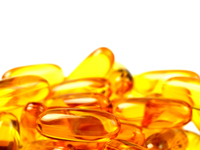 This was published in the Journal of the National Cancer Institute on July 10, 2013.

A recent Case – Cohort study using the data from the Select Trial which examined just over 35,500 men older than 50 – 55 years, given one of four combinations: Selenium plus synthetic Vitamin E, synthetic Vitamin E, Selenium or Placebo and followed for on average seven years, also had some blood analyses done as well. In this study, 834 men diagnosed with prostate cancer of which 156 were high grade, were compared to 1,393 men who were selected randomly to match the case subjects.  Blood levels were drawn for plasma phospholipid fatty acids and the risk for prostate cancer was assessed.

Another interesting finding was that those who had the highest level of the Omega 6 polyunsaturated fat linoleic acid had a reduced risk of low grade prostate cancer by 25 per cent and total prostate cancer 23 per cent. The findings with trans fatty acids were weak and inconsistent.

The conclusion was any recommendation to increase Omega 3 polyunsaturated fatty acid intake should consider the potential risks.

Firstly and mostly importantly, I would like to point out that this study did not look at the intake of fish or fish oil supplements in any way, shape or form. There was a direct assumption that the more fish or fish oil capsules you consume, the higher your blood levels of Omega 3 polyunsaturated fats.  Although this might seem like common sense, it is not always the right conclusion. The only way to really determine whether fish or fish oil capsules can increase the risk of prostate cancer is to perform a trial where you compare one group who is not taking fish oil versus one group who is taking fish oil in some form and determine their risk for prostate cancer. It is very difficult to randomise a dietary trial of fish because people know what they are eating but you could certainly do this with fish oil capsules.

Prior studies from Sweden and Boston have shown clearly that the higher the intake of fish, the lower the prostate cancer risk. It has also been shown in Japanese and Brazilian men as well. This study certainly did not look at the intake of fish or fish oil capsules and thus, in itself, makes the conclusions completely invalid.

Interestingly, consuming a low fat diet increases DHA levels and has nothing to do with the intake of Omega 3 fatty acids. There is also a question as to whether it is valid to express the fatty acid levels as a percentage rather than absolute blood levels.

Interestingly (and no-one seems to have made this point), it could be the prostate cancer itself in early and late stages, as the cells rapidly divide liberating Omega 3 polyunsaturated fats into the blood stream, as membranes contain a significant concentration of these fats and the men without prostate cancer may have a healthier Omega 3 to Omega 6 ratio in their cell membranes and thus are not liberating as much Omega 3 into the blood stream. Thus, the high levels of Omega 3 polyunsaturated fats in the blood stream are more likely to be a marker of cell breakdown caused by the underlying cancer rather than the intake of Omega 3s which have been shown clearly in a number of studies to be of benefit to the health.

The major problem with this form of poor science is that the conservative elements in the medical profession and the non-analytic components of the medical media, jump onto these studies and see it as more justification to deride complementary medical therapies.  It’s a pity that the same necessary scientific analysis of medical information and the same rules are not followed when it comes to many aspects of pharmaceutical therapy. I, for one, will continue to take my Omega 3 fatty acids as I believe when you look at the totality of evidence that these are part of a beneficial preventative health program.