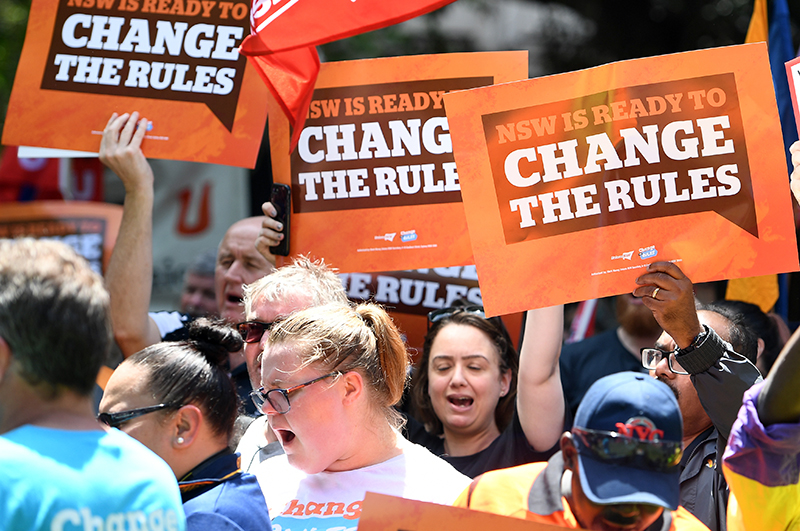 The ACTU campaign wants to change the rules

Over the past week, the Australian Council of Trade Unions (ACTU) has been encouraging workers to attend its ‘Change the Rules!’ rallies in Australia’s capital cities. According to the ACTU, the ‘Change the Rules!’ campaign is about giving “…all working people the basic rights they need to improve their living standards” (https://changetherules.org.au/learn-more).

The ‘rules’ the ACTU hopes to change are the workplace relations laws found in the Fair Work Act 2009. The Fair Work Act was introduced by the first Rudd Labor Government back in 2009, and was steered through the Parliament by the then Workplace Relations Minister, Julia Gillard.

So, just to be clear then, the ‘rules’ the ACTU now desperately wants to change are the ones they helped write and which were enacted by a strongly pro-union government. Hmmm.

Leaving aside the fact it’s fairly unusual for any organisation to champion the abolition of a system it helped create, I for one support changing at least some of the ‘rules’ enshrined in the Fair Work Act.

Take minimum rates of pay for example. Imagine for a moment you’ve decided to open a new shop selling cakes and coffee and have just hired your first employee (we’ll call him Ben). One of the first things you’ll obviously need to decide is how much you need to pay Ben. Well, let’s follow the ‘rules’ to find out…

First, we need to decide which of the 122 Modern Awards applies to Ben as a matter of law. Chances are we’ll be able to narrow this down fairly quickly to two Modern Awards: the Fast Food Industry Award and the Restaurant Industry Award.

It ‘feels’ like it should be the former, but the term ‘restaurant’ is defined very broadly in the latter. And your shop has tables and chairs and some people eat their cake and drink their coffee at the tables, and others ask for everything ‘to go’. Turns out you can’t decide which Award applies and you need expert help.

After eventually settling on an Award, you discover Ben is entitled to a different hourly wage depending on whether he is:

·       working on a weekday, or a weekend, or a public holiday (or during ‘ordinary hours’ on a weekend;

·       working hours that qualify as ‘overtime’ under the Award (except on a weekend, when a different rate might apply);

Unsurprisingly, you decide it’s all just too hard (you don’t have an accountant or payroll expert on the books after all) so you choose to pay Ben a fixed annual salary instead.

Unfortunately, in doing so, you fail to comply with the page-long set of ‘rules’, which must be followed when paying an annualised salary to this Award-covered employee. This ends up exposing you to penalties of just over $60,000 per breach. So, you fire Ben, face an unfair dismissal claim (which you end up settling by paying Ben ‘go-away’ money) and then close your shop.

Memo to the ACTU: yes, please change (some) of the rules!