Why Janet Yellen should raise rates

The United States Federal Reserve meets this week at a time when expectations of another US interest rate rise are starting to hot up. To my mind, the case for higher US interest rates is compelling, but I fear the Fed may again back down at the first sign of financial market discomfort.

First, let’s be clear why the Fed should raise rates.

For starters, the economy is now into its seventh year of economic expansion and its work force is almost fully employed. Although some economists (notably Janet Yellen) may quibble that there’s still some underemployed workers (i.e. working less hours than they would like), the fact remains that US wage growth has stopped falling and is starting to move upward. An increasing number US business surveys suggest it’s getting harder to find suitable workers.

What’s more, it’s hard to argue US inflation is unusually low. At 1.6% in May, annual growth in the core private-consumer deflator (the Fed’s preferred measure of inflation) is broadly in line with its 20-year average. Annual core inflation has lifted notably over the past year from a tough of 1.3% in June last year.

Of course, the US economy faces some downside risks – as does any economy at any point in time. But the case for an emergency level of near-zero interest rates has long since passed.

There are also risks in not raising interest rates. The Fed remains desperately short of interest-rate ammunition should the economy again stumble into recession. It could only realistically cut the Fed funds rate once, and would have to rely on yet another round of bond buying – at a time when its own balance sheet is still bloated with an enormous level of public and private sector debt. Although it’s a delicate operation, restoring interest rates “to more normal levels” while the economy is in good shape is simply prudent policy making.

Failure to raise interest rates is also keeping the global “yield chase” alive and well, with high risk credit spreads in many corners of the financial system at perilously low levels. Sustained low sovereign bond yields are also starting to more persistently push up equity market valuations. America’s S&P 500 Index is now trading at price to forward earnings valuations over 17 - a level not consistently seen over the past several decades outside of the notorious dotcom bubble era. 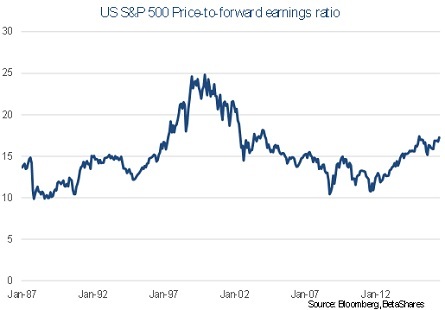 Although the Fed has long claimed not to target asset prices, it beggars belief it could turn a blind eye to the potential destabilising effects of allowing another bubble to develop. The more equity valuations are pumped up to unrealistic valuations, the harder the inevitable fall – and likely deeper the recession – will be later. That’s all the more worrying considering the Fed now has so little ammunition to deal with a bubble’s aftermath.

Of course, the Fed seems very worried about what an untoward lift in interest rates might do to the US dollar and Wall Street. With most other central banks around the world still retaining a policy easing bias, higher US interest rates will likely push up the US dollar – thereby hurting US competitiveness and offshore earnings of most of America’s major multi-nationals. The combination of weaker offshore earnings and higher local interest rates – at a time when valuations are already high – also risks a major US stock market correction.

But the Fed can’t simply continue to run-away at the first signs of market tantrum. It needs to patiently explain why a modest lift in interest rates is not that big a deal and should not unduly hurt the economy – rather than fretting publically over the impact that such a move might have.

The market is currently a bit like a spoilt child – who knows, if mummy tries to take away their lollies, they’ll get their way if they just cry loudly enough.

The market needs some tough love. After all, we limit the lollies we give our children for good reason - as they are too short-termist in thinking to realise too much sugar will end up hurting them in the long-run. We also try to teach our children that simply crying won’t get them what they want. They need to earn their gains.

At present, the Fed can’t stand to hear Wall Street cry. But we could all end up worse for it.