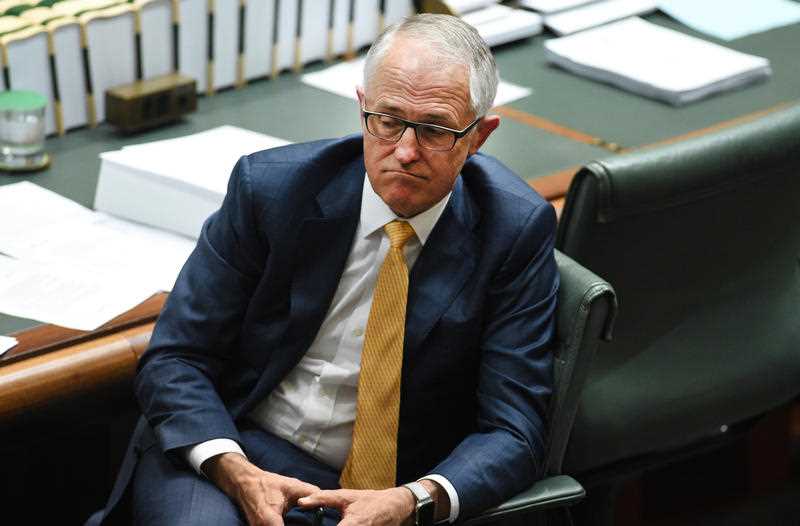 What to expect from tax reform

With the installation of business-savvy Malcolm Turnbull to the Prime Ministership, one of the key areas of reform now on the table is taxation.

Of course, everyone has their own idea of what should be done to the tax system -  which often reflects their own vested interest – so achieving a consensus on tax reform could be difficult, if not downright impossible.

Against this background, however, an important but perhaps not widely noticed speech by a Treasury official last week does appear to reveal the broad outlines of where consensus might be reached.

Recall that the Government released a Tax Discussion Paper in March and invited submissions from across the community. All up, there have so far been around 870 submissions according to the Treasury – which is a lot of material to review!  There were around 470 submissions from individuals and around 400 from organisations.

For what it’s worth, I even submitted my own idea – based on the electronic transactions tax (ETT) I have previously outlined here on Switzer Daily.

Of course, it begs the question: are there any areas where some consensus seems possible, and other areas that seem a no-go area?

It turns out there are.  The head of Treasury’s White Paper Taskforce is Roger Brake of the Department’s Revenue Group. In a speech entitled “An inside perspective on the Tax White Paper” delivered to a Victorian Tax forum last week, Brake lifted the lid on what Australian wants.

Treasury looked through the submissions and even developed a “word cloud” (provided below) to indicate which topics were mentioned most.  According to Brake these were superannuation, the goods and service tax, income tax, the overall tax system and capital gains tax. 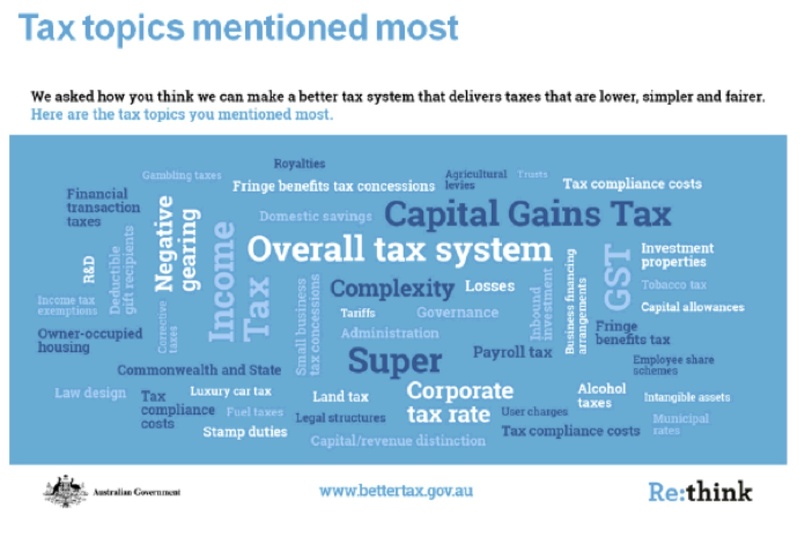 Encouragingly, Brake noted “there was widespread support for reform and dissatisfaction with the level of complexity in the tax system.”

So where could revenue to raised? According to Brake, the most agreed method seems via the GST.  Indeed, Brake suggested “there is support for broadening the GST base and/or increasing the rate, conditional on compensation for people with low incomes.”

Super concessions are another target area, though still likely to be open to significant dispute. Brake indicated “there is support for reducing existing superannuation concessions, but no clear agreement on how this should occur”.

Similarly, Brake said many submissions argued that “different classes of savings should be taxed in a similar way.”

Capital gains seem another avenue for revenue enhancement – though as with super – not without a fight. According to Brake, “there is support for less concessional treatment of capital gains, although current arrangements are strongly supported by sections of the business community”.

That said, investors relying on tax-advantaged high dividend yielding stocks can seemingly rest easy. Brake indicated “There is consensus that dividend imputation should be retained.”

So far so bad for taxpayers - but where should taxes be cut?

What’s more, the “overwhelming majority of views” expressed support for a reduction/abolition of stamp duties and there was “majority support” for abolishing or harmonising payroll tax.

Summing up, should the Turnbull Government seek to embark on tax reform, the broad outlines of national agreement seem to be around raising the GST impost (subject to compensation for those on lower incomes), and cutting back on superannuation and capital gains concessions. In exchange, revenue raised could be used to cut both personal and corporate income tax rates, along with stamp duty and payroll tax.

As such, this package would not just be about raising indirect taxes to cut income taxes – which could be consider regressive on its own - but also involves an element of broadening the income tax base also, especially for high income earners, through reduced superannuation and capital gains concessions.

Properly calibrated, such a package might be reasonably fair, as well as help boost competitiveness by lowering uncomfortable high income tax rates.   Even the states might agree to a GST increase if it could help cut payroll and stamp duty taxes.

Such a package would get my support, and most likely that of most fair-minded economists.

Of course, my electronic transactions tax did not get a mention – even though I still feel it’s a much better option than tinkering with the archaic GST!