Both the Federal Treasury and the Reserve Bank of Australia have recently released updated outlooks for the Australian economy which continue to paint a fairly encouraging picture.

The good news is that the growth we’ve seen has come from a variety of sources.  The bad news is, that has still not been enough, given all who want decent jobs with decent wages. What’s more, to my mind there still seems more downside to the upward risks to growth as we head into the new financial year, despite the cheerleading from our leading economic boffins.

Note both the Treasury and RBA estimate the economy is likely to have grown by 2.75% in the 2017-18 financial year, which is about to end in just over a month’s time.  That’s a nice step up from the measly 2.1% growth in 2017-16, and reflects both a modest accelerating in consumer spending growth (from 2.6% to 2.75%), and stronger business investment (from a decline of 4% in 2016-17 to growth of 4.5% this financial year) as the decline in mining investment slowed, and non-mining investment finally rebounded.

Indeed, one of the surprise developments over recent months has been an upward revision to consumer spending in 2017 – households were actually spending up a bit more than we initially thought. That seems a little more in keeping with the very robust pace of employment growth last year.

As Treasury noted in the Budget papers, a record 415,000 net new jobs were created in 2017, three-quarters of which were full-time jobs.  Digging deeper, one third of these jobs were created in the health care and social assistance sector (Australia’s biggest sector employer), reflecting strong growth in aged-care services due to population ageing and the rollout of the National Disability Insurance Scheme (NDIS).

The construction sector accounted for one fifth of the new jobs, reflecting ongoing high levels of home building activity, public sector infrastructure projects (roads, rail and the NBN), and a lift in construction of hotels (responding to strong tourism), aged-care facilities (population ageing), and offices in the strongest states of New South Wales and Victoria.

Despite tales of woe in the retail sector, it was actually the third strongest sector in terms of new jobs growth last year – adding almost as many new workers as the construction sector.  In turn, that also likely reflects ongoing strength in tourism. 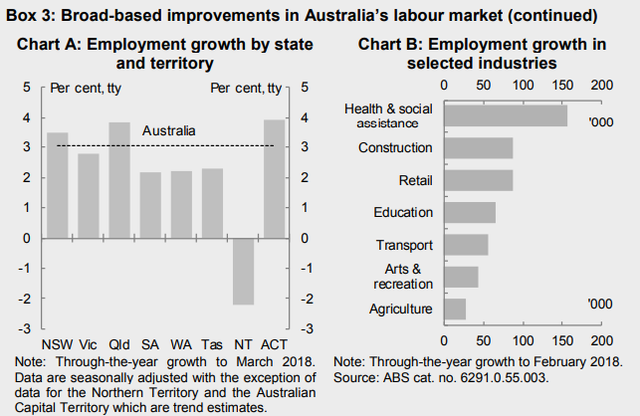 In essence, the economy has been enjoying a diverse range of growth drivers – tourism, home building, aged-care, disability services, and public infrastructure. But thanks to rising labour force participation, strong immigration, and the fact many new jobs are being created in the lightly unionised service sectors like retailing and social assistance, all this growth has not been enough to see a decent decline in underemployment, and a decent rise in wage growth.  And even today, both the Treasury and RBA can only point to “pockets” of labour market tightness in areas like construction and technology, suggesting broader based wage gains seem unlikely anytime soon.

Of course, the good news is that this means the RBA is also unlikely to raise interest rates anytime soon, and the economy still has good capacity to growth even more strongly without causing undue inflation.

On this score, our economic boffins do reckon conditions could get even better next year – Treasury expect growth of 3% in 2018-19, and the RBA is even more bullish with growth of 3.25%.

Only Treasury provide more detail on their economic forecasts – and their numbers suggest much of the extra strength will come from higher exports (services, LNG and iron-ore) a brief rebound in housing construction (reflecting stronger approvals in mid-2017), and a further slowing in the rate of decline in mining investment.

Notably, public demand and non-mining business investment are both expected to slow a little next financial year, while consumer spending (most critically) is expected to keep up the reasonably solid pace of growth seen this financial year.

Where are the risks? Business confidence is strong, so non-mining investment could surprise on the upside.  Meanwhile, probably the biggest downside risks remains consumer spending and housing construction.  Consumer spending could easily slow with weaker expected employment growth, and especially give the ongoing softening in Sydney and Melbourne house prices.  A post-Royal Commission tightening in bank lending standards could also undermine both house prices and housing construction.