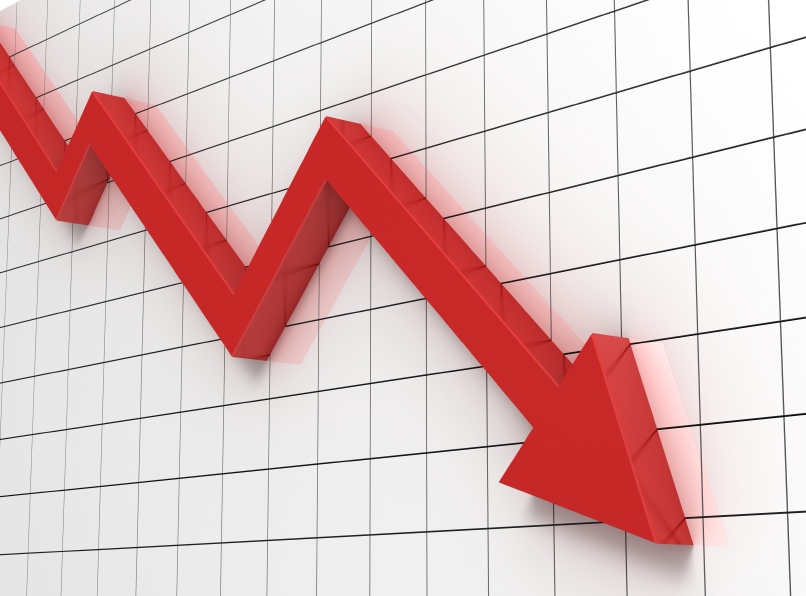 Reasons for the current market pullback

When looking for reasons for the current pullback in global equity markets one need look no further than US equity market valuations and corporate earnings.

To my mind, investors are wrongly focusing on the high profile suspects such as oil prices and China’s fumbling within its own financial system. The actual reasons are far more straight forward - US equity valuations reached excessively high levels and earnings growth has flattened out.

The bad news is that more market weakness may well be required to restore Wall Street valuations to attractive levels. The good news is that we need not be entering a sustained new bear market as interest rates will remain supportive if need be, and US corporate earnings are unlikely to collapse.

Let’s take a good look at Wall Street.  Australian investors with unhedged US equity market exposure might be forgiven in thinking Wall Street has been great over the past year. After all, in Australian dollar terms, the S&P 500 rose by 11.4% in 2015.

But that was largely because of the decline in the $A.  In local currency ($US terms), the S&P 500 in fact fell 0.7% last year.  Weakness on Wall Street is nothing new.

Why has America’s stock market ground to a halt? Because valuations reached nose bleed levels at a time when the post-crisis rebound in US corporate earnings began to soften. 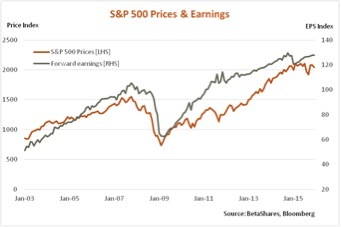 More importantly, just over two thirds of the rise in the index reflected a lift in the price-to-forward earnings (PE) ratio from 11.9 to 16.3 – compared with an average since 2003 of 14.5. 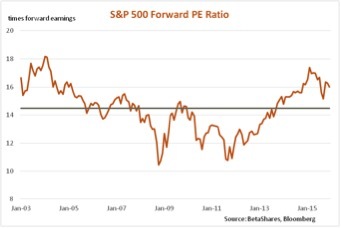 Since end-November 2014, meanwhile, forward earnings have been flat. Of course, the S&P 500 still pushed on to new highs in the first half of 2015, but only because the PE ratio stretched to beyond 17.  That level could not be sustained, and by year-end the PE ratio was back down to a (still high) 16.0.

At that level the market was not even all that cheap relative to interest rates.  As seen in the chart below the gap between the market’s forward earnings yield (inverse of the forward PE ratio) and 10-year government bond yields ended last year around 4 percentage points.  While that was marginally above the 3.7pp average since 2003, it was at the lower end of the range that has generally held since the global financial crisis. So arguably even against low interest rates, the market is not obviously cheap by the standards of recent years. 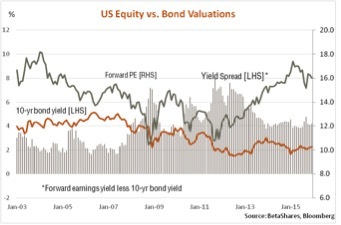 Fair-value for the market (based on valuations since the GFC) might reasonably be considered a gap between the forward-earnings yield and bond yield of 5 percentage points.  Even assuming bond yields of 2%, this would imply a forward earnings yield of 7% (or a forward PE ratio closer to 14.5).

The good news is based on the closing level of the S&P 500 on Friday at 1880, the forward PE ratio (based on end-2015 forward earnings) had already fallen to 14.7. Arguably the market had already reached close to fair-value.

The bad news is that such pull backs usually don’t end until prices have reached compelling cheap levels – as in 2009 and 2012. If the forward earnings to bond yield gap widened out to say, 6pp, and assuming bond yields held around 2%, that would imply a fall in the S&P 500 forward PE ratio to around 12.5 (or 1600 on the index based on end-215 forward earnings).  To reach such a level prices would need to fall a further 15%.

But unless forward earnings fall in a heap, such a fall would imply the market was good value again and might halt the decline. That’s why I think we’re only witnessing an (albeit large) valuation correction rather than a new secular bear market.

Of course, all this rests on US forward earnings at least moving sideways rather than – as they do during recessions - falling in a heap.  Weaker oil prices and the rising US dollar are clearly hurting profits of energy companies and those with offshore exposure.  But even if oil prices stay weak, this should be a net-positive for the US economy as it would likely encourage even greater consumer spending. And if the US economy really can’t support a higher US dollar, chances are the greenback will stop rising – perhaps because the Fed give’s up on raising rates again anytime soon.

Brace yourselves: it’s been a bumpy ride and it may not yet be over, but there does seem light at the end of the tunnel.