According to the RBA, our surprisingly strong employment results of late may not be as dodgy as many contend.

Amid all the concern over equity prices and the global economic outlook, last Friday’s Quarterly Statement on Monetary Policy by the Reserve Bank of Australia (RBA) offered a rare ray of sunshine.

According to the RBA, our surprisingly strong employment results of late may not be as dodgy as many contend.

What’s more, there’s some chance that the solid pace of employment growth could continue, pushing the unemployment rate down further while boosting consumer spending in the process.

If so, we can forget about another interest rate cut this year, and the next move in rates may well be up – though not until 2017

Let’s recall that employment growth has been impressively strong over the past year despite continued below-trend economic growth.

According to the Australian Bureau of Statistics (ABS), the economy added 301,000 new jobs in the twelve months of 2015, representing annual growth of 2.6%. Long-run average annual employment growth is around 1.8%.

At face value this looks dodgy. And there has been much discussion over how changes to the ABS Labor Force survey could be distorting employment results.

But before considering what the RBA had to say, there’s a more obvious point to be made: both employment and GDP growth can be volatile, and the relationship between the two is relatively loose and variable.

The chart below, for example, shows the relationship between annual growth in quarterly average employment and annual growth in non-farm GDP lagged two quarters (which is the measure of GDP typically used by economists when making comparisons to employment). 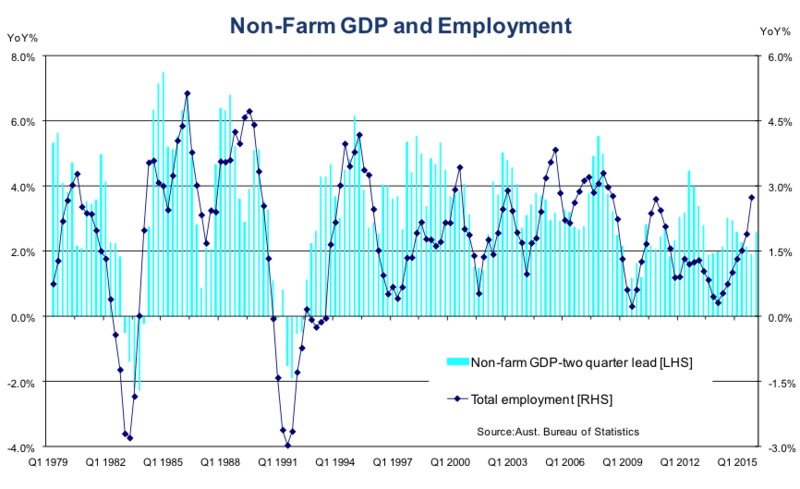 Annual growth in employment in the December quarter 2015 was a super charged 2.8%, which looks high compared to annual non-farm GDP growth of 1.9% in the June quarter. But as evident, the gap in performance between employment and GDP does not appear all that historically unusual.

Indeed, in late 2010, the gap between employment and GDP performance was just as large, while in mid-2015 GDP growth was, by contrast, very strong relative to employment growth.

What are we to make of this? To my mind it highlights the fact that the relationship between GDP and employment seems much closer when there are wide cyclical swings in the economy – as from recession to recovery – but it gets much looser when economic growth varies in a relatively narrower range, as has been evident in recent years.

What’s more, the relationship is even looser when there are also marked sectoral changes in growth between labour intensive and non-labour intensive areas of the economy as most recently evident during the boom-bust mining cycle.

Digging a little deeper therefore, the marked difference in employment and GDP performance of late is not that as unusual as it may seem at first glance: it’s premature to accuse the ABS of having dodgy statistics.

Turning to the RBA, the Bank last Friday noted the relatively strong contribution to growth stemming from the labour-intensive service sectors of late, which “may help to explain why employment growth has been strong even though GDP growth overall has been below average.”

The areas of health and aged-care have seen particularly strong growth – which is partly structural due to ongoing population ageing, but also partly a “one-off” as some child-care centres have been required to boost staff-to-child ratios under new legislation that came into effect on 1 January.

Labour market flexibility could also be a factor: the RBA suggests quite muted wage growth of late has made it more affordable for business to take on more workers.

That said, it can’t be claimed that a lot of recent employment growth has been “low quality” and concentrated in casual low wage areas of the economy.

As the RBA notes, “much of the increase in employment over 2015 has been concentrated in full-time work and in industries that do not have a particularly high proportion of casual employees”. This is especially true in health and professional services.

And those still suspicious of recent good employment news should note it has been corroborated by a range of other labour market indicators.

The number of unemployment benefit recipients has fallen, while labour force participation, and job vacancies and advertisements have also increased.

Surveys also suggests households are becoming less fearful of losing their jobs due to corporate restructuring.

So far so good – but where to from here? At almost 3%, annual employment growth is near the top-end of its range of recent years – and even the RBA expects some slowing from the torrid pace seen in the December quarter.