I suspect the RBA is quietly worried about the house price pressures that are starting to be unleashed by the current record low level of mortgage interest rates.

How spooked should we be about a house price correction?

The Reserve Bank of Australia quite rightly decided to leave interest rates on hold this week. And it was not just because the September quarter inflation results were in line with expectations. I also suspect the RBA is quietly worried about the house price pressures that are starting to be unleashed by the current record low level of mortgage interest rates.

Indeed, among the myriad of reasons being advanced for the rapid increase in house prices in recent years, especially in Sydney and Melbourne, one culprit stands head and shoulders above everything else: interest rates.

I’ve run my nationwide housing affordability numbers once again, and they’ve again highlighted our typical householder response to lower interest rates: rather than use lower interest rates to spend on other goods and services, the marginal home buyer tends to bid up the prices they’re prepared to pay for a home. As seen in the chart below, mortgage rates began to decline in the latest cycle in mid-2011. Because the major cities of Sydney and Melbourne were still being damaged by the last stages of the mining boom, national average house prices remained weak for another year. But from mid-2012 these cities – and the national average level of prices – started to take off. 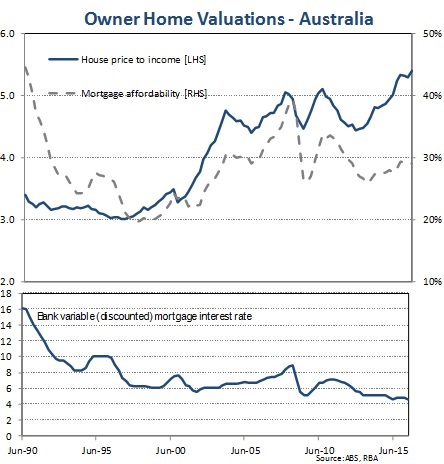 As evident in the chart, while house prices relative to after-tax household incomes have increased strongly in recent years (and now exceed the last two cyclical peaks), the rise in overall mortgage payments as a percent of household income has been more modest, and this measure suggests “mortgage affordability” is still not that far out of line with its long-run average.

In other words, most of the decline in interest rates has been used to bid up house prices relative to income, so as to keep overall mortgage affordability relatively constant. [Of course, all this assumes home buyers can afford to pay the 20% home deposit, which is also rising relative to income. This should be easier for buyers already with housing equity in a rising market, though it makes the task much harder for first home buyers trying to enter the market].

In the case of Sydney and Melbourne, the overvaluation is closer to 40%. The median Sydney established house price (as measured by the Australian Bureau of Statistics) would be closer to $620,000 rather than the $880,000 reported for the June quarter. 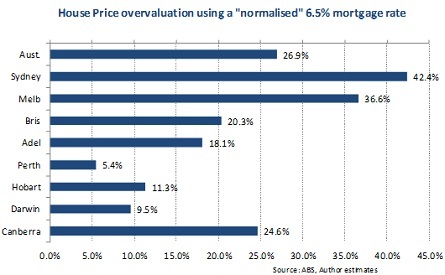 Of course, that’s not to suggest house prices are about to slump anytime soon. Interest rates are likely to stay low for some time, and may even head lower sometime next year. But the longer rates stay very low, the greater the adjustment challenges housing valuations will face later – as those myopic marginal buyers will keep bidding up house prices.

At the very least, the above analysis suggests that when the interest rate cycle eventually turns, nationwide house prices are likely to underperform the growth in household income for several years, and will most likely decline in nominal terms to some degree.

For those worried about eventual nominal house price decline, I’ve got news for you: we’ve been there before. According to ABS data, there’s already been three periods of nominal prices declines in just over a decade, though even the sharpest decline in Sydney did not exceed 10%. Provided the move back up in interest rates is relatively gradual, and the economy remains solid, a combination of modest price weakness – and underperformance relative to incomes for an extended period - seems the most likely scenario.