Households and business in tug-of-war over economy 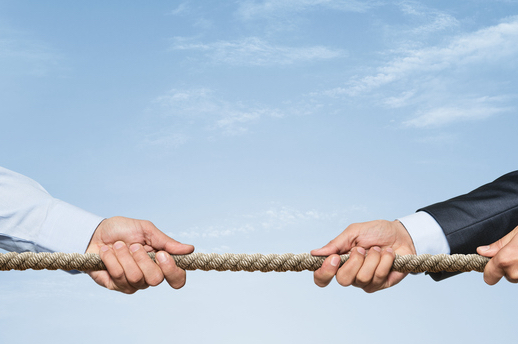 Households and business in tug-of-war over economy

The Australian economy is engaged in a tug-of-war between households and business. Households are in a funk, while business remains resolutely upbeat.

Another popular phrase is that the data are “conflicting”.

In turn, that’s left a few of the nation’s financial market economists thinking the next move in interest rates will be up, whereas others (including myself) can’t see the Reserve Bank moving one way or another for at least another year. There’s still even a chance the RBA could eventually cut rates again.

Just witness what we’ve seen in the space of a few short days.

Last week we got a retail sales “shocker”, which revealed spending at our malls and shopping strips dropped 0.6% in August after a (downwardly revised) 0.2% decline in July. Of course current September quarter weakness follows a spike in sales in the June quarter, which now appears to have reflected post-flood re-stocking in Queensland. Overall, retail spending can best be described as choppy around a fairly weak underlying trend. 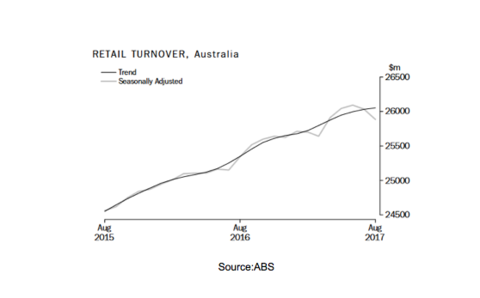 Soft retail spending is certainly consistent with other trends in the economy – such as weak wages growth, high household debt, and the recent squeeze in real incomes caused by a further spike in electricity prices.

But here’s where the differences emerge. The NAB survey released yesterday showed overall business conditions in September remained at robust above-average levels. According to corporate Australia, overall trading conditions are doing nicely, and businesses still intend hiring many more workers in the months ahead and are slowly but surely lifting non-mining capital spending plans also. 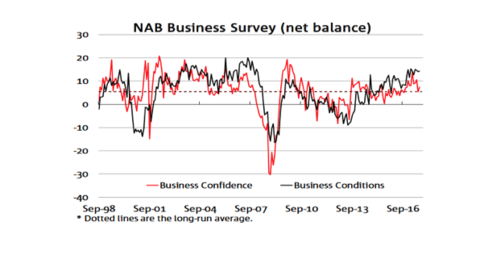 In turn, corporate optimism is consistent with what can only be described as boom conditions in the labour market. Net new jobs surged by 54,000 in August, and by 2.7% over the year – even though the unemployment rate still remains stuck around the mid-5% level.

So even though consumer spending and household sentiment is at best patchy, corporate Australia is pretty happy and still keen to take on workers.

Why is this so? And will downtrodden consumers drag business down or upbeat corporations drag hapless households up?

Looking through a range of other indicators, including the NAB survey, several positive business trends are apparent.

For starters, we are still enjoying a strong housing construction boom, together with a public infrastructure boom, both of which are also having nice downstream effects on the manufacturing sector. Strong Sydney and Melbourne property sales are also keeping real estate agents and lawyers very happy. The LNG gas and coal/iron-ore export shipping booms are also continuing, which is still holding up jobs and keeping the transport sector happy (though gas exports are arguably contributing to high electricity prices at home). In services, our increasingly revenue hungry universities are taking on more students in droves, even if the quality and cost of education is consequently suffering. For demographic reasons, the health care sector continues to boom also – as is spending on mobile phones and broadband services.

In short, there are a lot of positive drivers in the economy – which is being reflected in overall still positive levels of business conditions and employment. That said, many important traditional industries from retailing to media are facing the blowtorch of competition. More generally, average workers are still struggling to get a decent wage increase, and still feel their employment situation is vulnerable. Consumer spending (particularly traditional “bricks and mortar” retail spending) is understandably therefore dragging the chain.

The good news is that many of these positive forces – like infrastructure, exports, education and health - are likely to continue well into next year. However, the housing construction boom does appear close to a peak and will head into reverse in 2018. And households in Sydney and Melbourne will be feeling even less upbeat once signs of flatter house prices emerge. Traditional retail and media companies also face ongoing structural challenges – especially from upstart dotcom darlings that don’t hire many and shovel most of their profits offshore.

My overall sense is that this means the tug-of-war taking place across the economy will continue – a case of two steps forward and two steps back. In turn, this will frustrate the RBA’s hopes of 3% growth emerging in 2018 and will likely mean interest rates won’t budge either way for some time to come.