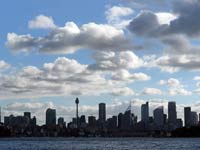 House prices are not about to crash

Rarely a week passes by in the Australian public policy debate without the perennial issue of house prices being raised. I’ve long been a defender of the view that Australian house prices are not in fact wildly over inflated – and so are not about to crash any time soon.

And contrary to some misguided media reports, recent research from the Reserve Bank of Australia only affirms my view.

Of course, my sanguine view is not because of especially good public policy. Indeed, a major reason why house prices seems high relative to household incomes in this country is because of the large “proximity premium” that has been built into the value of most of our homes which have been allowed to luxuriate on large parcels of land very close to our major urban job centres.

In a recent speech, the RBA’s Head of Financial Stability, Luci Ellis, pointed out that urban density near our major job centres is relatively low by international standards. 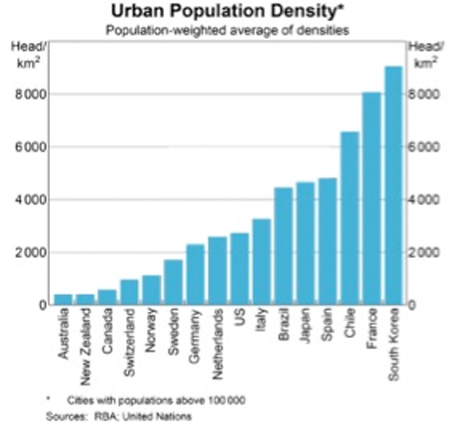 What’s more, our urban centres have become even greater job magnets in recent decades which, at least in part, likely reflects the growth in the services sector relative to manufacturing.

Yet this job shift has not been matched by a commensurate increase in the supply of homes near these new jobs, or improved transport links to allow those living in cheaper but more remote cheaper suburban areas to access these jobs more easily.

As a result, it’s no surprise the price of inner city properties (especially on decent land parcels) has increased relative to outer regional and suburban properties. If you’re a property investor, that clearly means investing in inner urban areas remains the way to go – unless, of course, public policies are eventually changed to either improve transport links from remote regions or encourage more jobs in these outer-lying areas.

Add the fact that interest rates and inflation have trended down in recent decades – and as we get richer we’re able to spend more on better housing – and the ingredients for solid gain in house prices are clearly in place.

Yet to my mind, what’s remarkable is that – despite these many positive forces – behind house prices, we haven’t had the huge house price bubble that many have feared. In fact, the adjustment in house prices in recent decades to these forces has been remarkably orderly.

Consider at the national level, for example, that house prices have broadly tracked household disposable income over much of the past decade. Of course, there have been cyclical swings around this average – in line with cyclical swings in employment and interest rates – but little evidence of a wayward upward trend. Household debt levels have also flattened out, and there’s still little evidence of a broad-based upsurge in mortgage defaults. Indeed, more and more Australians are taking advantage of low interest rates to save more and get ahead of their mortgage repayments. 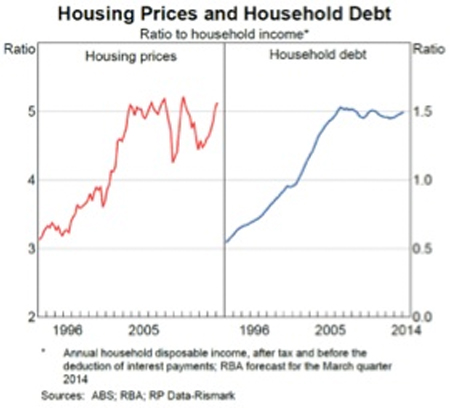 It’s for this reason, moreover, that I dispute billionaire fund manger Kerr Neilson’s recent claim that “to believe home prices in the next 10 years will meaningfully outpace the consumer price index (CPI), as they have in the past, would require a remarkable set of circumstances”.

Not really. All we need is household incomes continuing to rise by more than inflation – consistent modest real wage gains on the back of rising productivity – and for house prices to continue to broadly track household income.

That brings me to the rent vs. buy debate, which recently attracted attention on the back of further research from the RBA. According to the headlines, this research – by staff economists Ryan Fox and Peter Tulip – suggested households might likely be better off renting then buying in the decades ahead.

Really? According to the report, assuming a long-run real mortgage rate in line with the historical average of around 3.3 per cent, and allowing for annual running costs and depreciation amounting to a further 3.3 of housing values, the annual real “user cost” of home ownership amounts to 6.6 per cent.

Given current rental yields of 4.2 per cent, it implies buying remains just as good as renting provided real house price gains in coming decades manage to match their 60-year average of around 2.4 per cent.

That doesn’t seem a stretch to me, and would be consistent with house prices not rising relative to household incomes or the real economy.

Meanwhile, the headlines suggesting renting may be better than buying was based on one scenario suggested by the RBA authors, in which real house prices only grew in line with their recent 10-year average of 1.7 per cent – which in turn was put forward to reflect the view that “many (though not all) forecasters believe house prices are likely to grow at a somewhat slower rate in the future”.

Viewed this way, however, suggestions of house price overvaluation easily lurch toward the tautological – house prices are clearly overvalued (relative to renting) if we assume they are likely to grow at a very low rate in the future.

Again, to my mind however, what’s most remarkable from this RBA research is the fact that rental yields historically have managed to track the real user costing of owning over time relatively well – for example, just compare the pink and blue lines in the middle chart (from the RBA research quoted above) below. 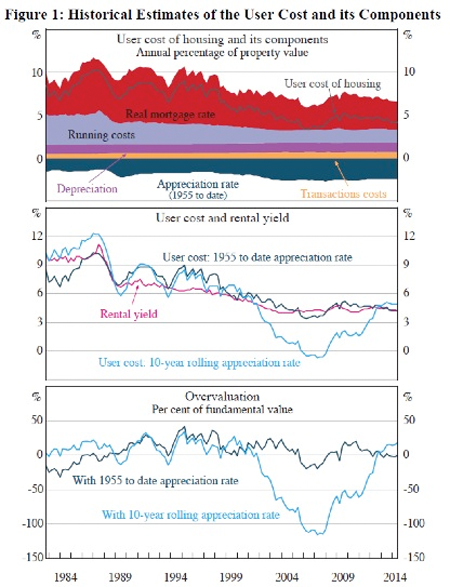 Principally reflecting lower real mortgage interest rates, the user cost of owning a house has fallen in recent decades – which has been matched by a commensurate decline in rental yields. Of course, wider than normal deviations between these two measures have been evident at points through time - which is a reasonable measure of short-term house mispricing – but the gap does invariably close back to more normal levels.

As the authors note, “estimates of overvaluation fluctuate around zero. There has been no clear tendency of Australian houses to be overpriced or underpriced, and the level of overvaluation, when averaged over a long time span, has been small”.

In short, house prices and rents adjust over time such that the long-run implied break-even house price gain is close to what reasonable people might expect – i.e. near the inflation rate.

As the authors also note, the decline in the annual real cost of home ownership - and as a result rental yields - explains why house prices rose relative to both rents and household income over the past few decades. As a result, valuation measures assessing house prices relative to past average price-to-income or price-to-rent ratios – as used, for example, by the OECD, IMF and The Economist Magazine - are therefore hopelessly flawed.

But here’s the real kicker: despite all the current hoopla about house prices – and suggestions that that tax breaks like negative gearing are causing massive distortions - the RBA authors' own estimates suggest house prices are currently close to fair value, and when they’re not, they usually gravitate back to fair value within a reasonable time period.

In this sense, tax breaks favouring home buying appear to have had the effect over time of bidding down rental yields – and so are best thought of as a subsidy for renters rather than would-be home buyers.

All up, however, the most remarkable feature of the Australian housing market in recent decades is not how overvalued it has become – but how well prices have adjusted to the market forces imposed upon them, without creating a sustained bubble.

It’s often not pretty to watch, but markets do work.