It's time to stop relying on taxes of a bygone era and consider one single tax that could replace the GST, company tax and drastically reduce income tax.

Get rid of the GST and save $50 billion

With projected Federal Government Budget deficits as far as the eye can see, there are understandably renewed calls for cut backs in spending and a review of taxation.

To my mind, however, while some spending cuts are clearly possible, Australia’s health and welfare systems are already among the most tightly targeted in the world.

That leaves taxation, where most economists would concede more probably could, and should, be done to shore up our eroding tax base. Indeed, despite our reasonably extensive social welfare system, the fact remains Australia remains a relatively low tax country – which is again testament to the fact that we don’t waste too much of the money we spend.  Given the parlous Budget outlook, it’s probably true overall tax levels are too low.

That said, I also think it’s also time we moved beyond the usual debates around tinkering with the good and services tax, or our already complex systems of taxation of personal, corporate and superannuation income.

As regards the GST, for example, all revenue raised is legislatively required to be given to the States. That means there’s not a huge incentive for the Federal Government to take the political heat for hiking its 10% rate, or broaden its base to areas such as fresh food, health and education. And if the extra money given to the States from such actions could enable the Federal Government to cut back State assistance in other areas, there’s not much incentive for the States to support GST changes either.

In short, despite all the lip service, I strongly doubt we’ll see any real reform of the GST anytime soon. It’s just too hard.

And that’s probably just as well, because contrary to original claims that the GST would simplify the tax system (remember the theme song “Unchain my heart”), it has only burdened small business, especially, with more red tape. According to a recent survey by software provider MYOB, the average Australian small business spends 84 hours a year sorting through transactions so as to collect the right amount of GST for the Government – or two full weeks. That compares with only 39 hours in New Zealand.

The GST has also led to a quietly flourishing black economy around the country – as for example, most “tradies” will quote you two prices, including a cash price excluding GST.

I’m up for abolishing the GST – and replacing it with a much simpler tax to administer, levied on the largest known tax base in the country.  And because the tax base is so huge, the tax rate can be quite small and hardly noticeable in most cases.

Which tax base? Electronic transactions – which are only set to grow as we move inexorably toward a cashless economy.

According to the Australian Payments Clearing Association, in the 12 months to June 2014, Australian business and consumer collectively made 17 billion non-cash payments, worth a total of $100 trillion – or 66 times the value of annual nominal gross domestic product (of around $1.5 trillion). 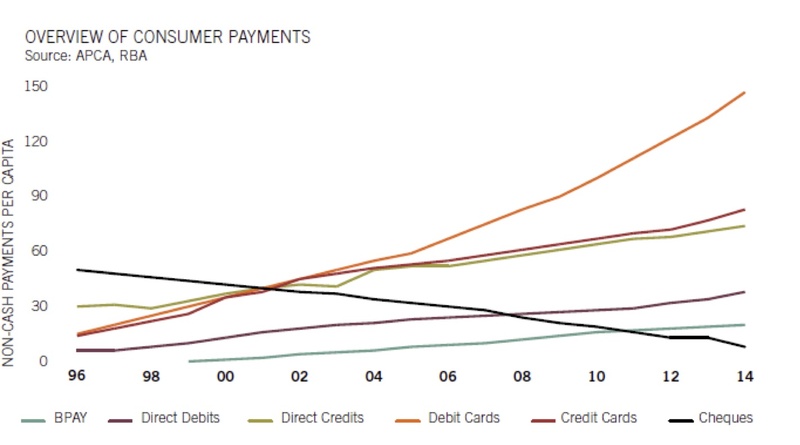 Imagine a tax rate of 0.25% levied on either side of these transactions – such that both payer and payee would be charged a mere 0.125% each. That would equate to a charge of 12.5c for each $100 household shopping transaction (the shop would also pay 12.5c). On a $500,000 home sale, each side would pay $625 in electronic transactions tax.

But here’s the kicker: a tax rate of that magnitude would raise around $250 billion in revenue – or five times the $50 billion raised from the cumbersome GST.  In fact, with such a tax we could abolish the $50 billion GST, the $70 billion company tax haul, and half of the $163 billion take from personal income taxes - and still have around $50 billion in remaining revenue (worth around 3% of GDP) to more than plug the remaining budget deficit gap.

Such a tax would also be progressive – or at least not regressive - in that all would pay the same flat tax rate on transactions, meaning higher income households (with higher value transactions) would pay more in total.

Imagine a country where small business did not have to worry about a complex quarterly BAS statement, and where no business need worry about company income tax at all?  Rather than multinational companies sending money offshore, they’d be expanding their operations down under.  And imagine an average personal income tax rate closer to 15% than 30% or so?  It would make us competitive with the low income tax rates of Hong Kong and Singapore, enabling us to attract and retain more highly skilled workers and the businesses they need to employ them.

Such sweeping tax reform would transform the Australian economy into a powerhouse, and set us up for future growth not reliant on either a mining boom or ever higher levels of household debt.  It would also not require us to slash and move toward a cruel US-style welfare system.

Of course, I’m sure many will find fault with my electronic transactions tax or “ETT”. There are probably some administrative aspects I have not considered. But even if such a tax could raise only half or even a quarter of the $250 billion suggested, it would still help reduce a lot of other far more inefficient taxes we’re lumbered with.