Australian investors need to prepare for an event which history suggests could hurt them, but which need not derail their longer-term investment strategy.

Australian investors need to prepare for an event which history suggests could hurt them in the near term, but which need not derail their longer-term investment strategy. Indeed, there may be occasions in the next few months when it seems the best thing to do is raise the white flag – but we can’t lose our nerve.

What event am I talking about?  It’s the event that has been looming on the horizon for several years now but which markets have long wanted to pretend could be put off indefinitely.

By that I mean the first increase in US official interest rates in nine years.  As recently as a few weeks ago, many Wall Street traders were still trying to convince themselves this would not happen until mid-2016.  And even a US congressman told the Federal Reserve it was not “God’s plan” for them to raise rates anytime soon.

But the case for leaving US interest rates on hold has simply stretched beyond all credibility.  I have long argued the Fed is behind the game and last Friday’s US payrolls report only proved my point.

Last Friday we received news that the US economy generated   271,000 new jobs in October – crushing market forecasts for a still strong rise of 181,000.  But perhaps most importantly, the unemployment rate sank further - to only 5.0% - and wage growth is starting to stir with a solid 0.4% gain in average hourly earnings. As seen in the chart below, annual growth in US average earnings leapt to 2.5% - while still low, it’s the highest level since the GFC. 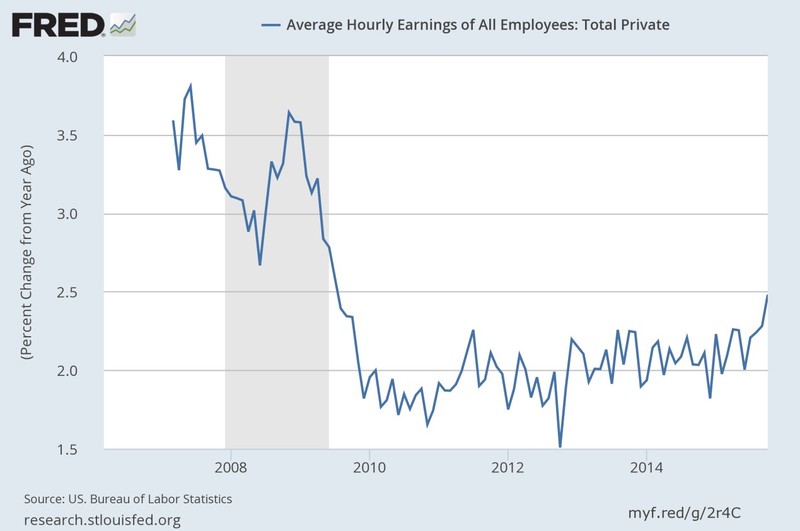 Wage numbers such as that are scary – as it leaves the risk that the Fed may not have the luxury of raising interest rates only “gradually” as it has longed promised.  If it turns out the US economy is already near full employment and the economy has a strong head of stream, the Fed faces the risk of having to put on the brakes much more quickly than anyone imagined.

In short, the payrolls points to the reality that the Fed will now likely be forced to raise interest rates at its next policy meeting on December 15-16.  While there is another payrolls report due before the Fed meets again, it’s unlikely to be catastrophically weak enough for the Fed to remain on hold.

What does this mean for investors?  I’ve done a lot of work on this question, and what I can tell you is that history suggests the near-term market reactions are likely to be negative.

As seen in the chart below, the S&P 500 has put in a negative performance in the first three months following the start of the last three Fed tightening cycles.  But in the two more “gradual” tightening cycles of 1999 and 2004 (1994 was particularly nasty!) the market was up six and 12 months after the event. 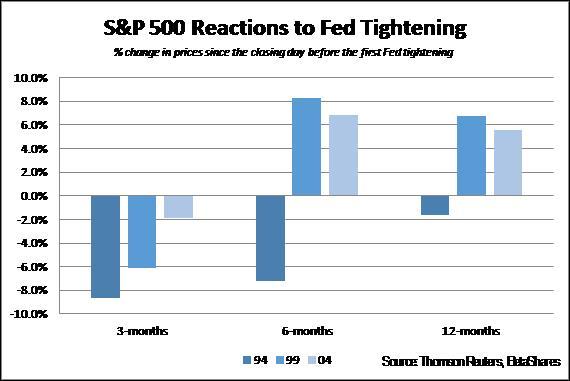 When you think about that it should not be too surprising. After all, while the first move in rates is likely a shock to markets that needs to be allowed for, the reality is the Fed is only tightening because the economy (and corporate profits) are strong.  At the early stages of Fed tightening interest rates still remain low and non-threatening to the economy and there remains ample spare capacity to sustain solid above-trend economy growth.

As seen in the chart below, Australian market reactions have been similar. Again that is not too surprising as the local market does tend to broadly track the US market. 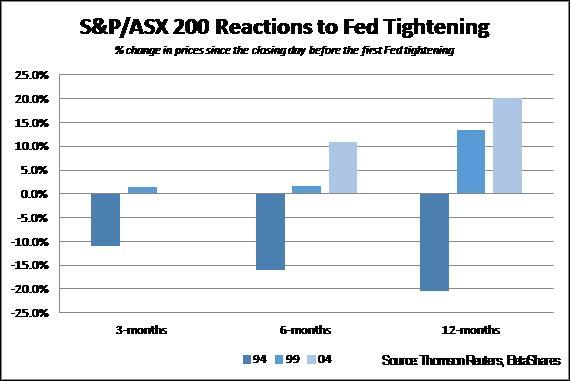 As I said, the good news is that barring an aggressive tightening cycle as in 1994, history suggests market should be able to weather the storm reasonably well.  Even so, last Friday’s US wage outcome was not comforting.  Given the Fed has been so late in raising interest rates in this cycle – with the labour market already near full employment – we can only hope we don’t get an earlier than usual break out in wage inflation during this policy tightening round.

If we do, all bets are off.