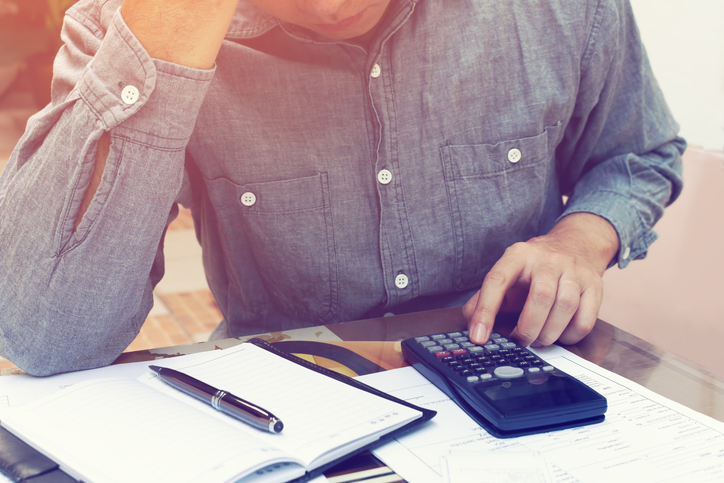 Fear not over-indebted Australian households – having debt has its problems, but also its advantages.

Rightly or wrongly, Australian households are finding this out right now given the Reserve Bank’s caution about lifting interest rates anytime soon.

Famed Australian entrepreneur Alan Bond lived by the same motto, figuring he had great bargaining power over the banks given he tended to owe them a lot of money. And even the great Wall Street banks such as Goldman Sachs and JP Morgan were granted protection during the global financial crisis, because the sheer size of their operations and debt levels meant they were simply too big to fail.

In this sense, the Australian household sector is also too big to fail – and the RBA knows it.

Indeed, consumer spending accounts for around 50 to 60% of economic growth and so were households to suddenly decide to close their wallets and focus on paying down debt it would send the economy into a spin, and make paying down those debts all the harder.

Thanks to low interest rates and the current housing boom across the east coast of Australia, the ratio of household-debt-to-disposable income has ratcheted up since 2012 from around 170% to 190%. By global standards, this ratio is relatively high – at least compared to larger economies such as the United States, Germany and Japan. But it’s not too far out of line with debt levels in Canada, New Zealand and several Scandinavian countries. 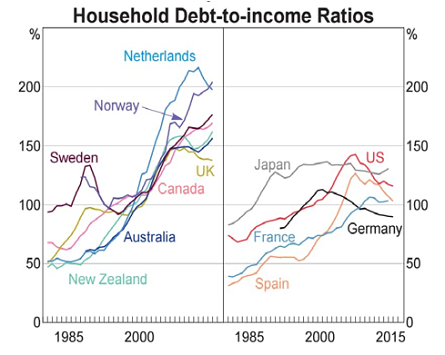 Either way, the debt load - along with weak growth in wages and perceived employment vulnerability - has left consumers with new found caution. Consumer confidence remains decidedly less upbeat than business confidence and overall household spending in the past year or so has been patchy.

The good news for indebted households – though not for those reliant on interest income – is that their debt vulnerability has not gone unnoticed at the RBA.

In the minutes to its July policy meeting released this week, for example, the RBA Board noted that “the high level of debt on household balance sheets raised the possibility that consumption growth could be lower than forecast”. What’s more, it was also noted that “the need to balance the risks associated with high household debt in a low-inflation environment” was also influencing the Bank’s decision to leave interest rates on hold – even though a range of economic indicators had improved of late.

It’s been this vulnerability that has also encouraged the RBA – along with the Australian Prudential Regulation Authority (APRA) - to introduce a new range of so-called “macro-prudential” controls to better target the problem areas of speculative property borrowing without hurting everyone with a mortgage. The net effect has been that interest rates faced by property investors, and especially the vast bulk of those with interest-only loans, have increased by around 40 basis points so far this year – almost two full RBA rate rises. Meanwhile, the mortgage rate for existing owner occupiers with traditional principal and interest loans have hardly changed. 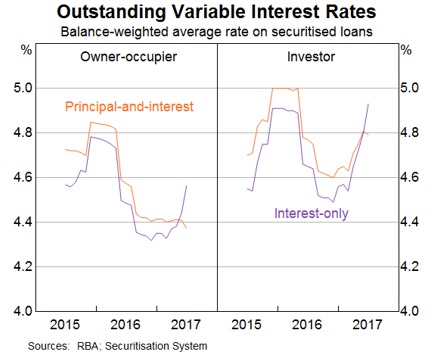 Although the housing markets in both Sydney and Melbourne remain hotter than officials ideally desire, it’s fair to say the introduction of better targeted policy measures has been a welcome innovation and has left policy-makers with far greater flexibility to manage both inflation and financial stability.

Accordingly, until such time as inflation rises more strongly and/or the economy gets a greater head of steam, don’t expect the RBA to use the blunt instrument of official interest rates changes to tackle lingering strength in our hot Sydney and Melbourne property markets. If push comes to shove, it seems more likely that APRA will impose even tough restrictions on investor lending, possibly even quarantined to activity in our hottest cities.

As I said earlier, many households have high levels of debt – but there’s safety in numbers.