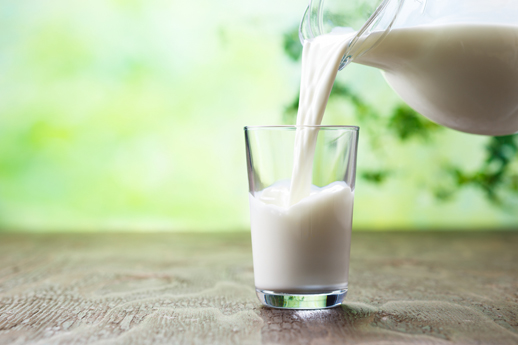 Where the budget is heading

I’m starting to get a little peeved with the almost exclusive focus on long-term economic and financial forecasts by the Federal Government and the Reserve Bank alike. The reason is that they increasingly seem to leave our policy makers unaccountable for the results they actually achieve in real time.

It’s a classic shell game – keep excitingly pointing to the future and hope the punters won’t notice the present.

Take the latest Mid-Year Economic and Fiscal Review (MYEFO) from the Turnbull Government.  The headlines naturally focused on the near-term improvement to the budget bottom line, and the still reasonable prospect that the Budget could return to surplus by 2020-21.

Indeed, the underlying budget balance will now be in deficit by “only” $23.6 billion this financial year, or around $6 billion less than expected in the May Budget. What’s more, the surplus in 2020-21 is now projected at a tidy $10.2 billion, or $3 billion more than expected in May.

But rather than leave this money on the table for the Labor Opposition to promise spend (as it surely would), the Government is now hinting there’s enough fat in the budget projections to potentially fund another “milkshake and a sandwich”  income tax cut. We’ll likely hear more about this in the May 2018 Budget.

That’s one immediate problem with long-term budget projections – in what appears a scorched earth policy to deny the Opposition any money to play with, Governments of the day are now quick to commit to spend anything that leave more than a threadbare surplus over the forward estimates. That’s despite the fact overall public debt is still elevated (at least by our own standards) thanks to the legacy of the financial crisis and a fall back to earth in commodity prices.

Another problem is that the Budget projections naturally tend to improve over time – with little extra work by the Government – due to the magic of “bracket creep”, or the increases in average taxes faced by households as rising nominal incomes lift them into higher marginal income tax brackets.  Aiding this miraculous budget improvement is the assumption that the economy will automatically step up to an above trend pace of growth so as to eradicate excess unemployment within a few years.  How very convenient!

As seen in the chart below, the “hockey stick” budget improvement forecasts are nothing new!  Yet especially over the past few years of commodity prices declines, these forecasts have proven woefully optimistic. 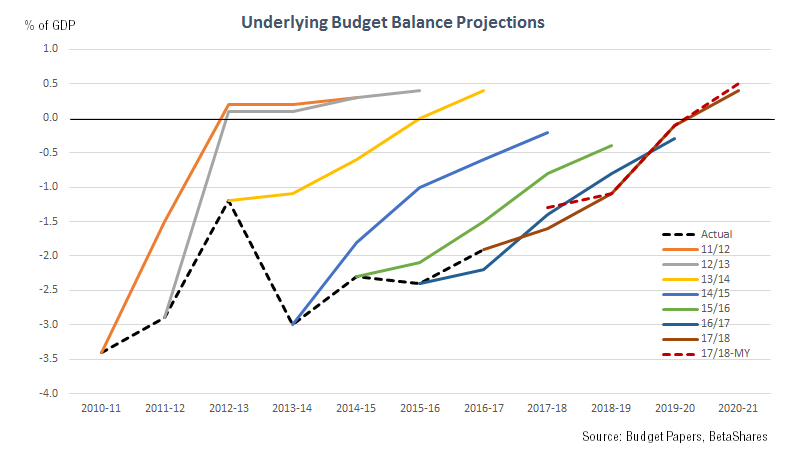 I’m not suggesting these are not reasonable assumptions – after all we need to assume something and full employment is a worthy aspiration.  Rather my concern is that these projections – which are obviously subject to considerable revision - then tend to assume undue public focus, and seemingly let Treasurer’s off the hook for current economic conditions.

The 3% growth forecast in 2018-19 is certainly encouraging – but it’s still just a forecast. And the Government’s recent track record in predicting better times ahead has not be great.

One clear risk to the economic forecasts is the fact the Government is still counting on a further run-down in household saving to support consumer spending over the next year or so, even though households appear ever more cautious about their finances, and should be even more frugal as the Sydney and Melbourne house price booms subside.  Judging by international evidence, I also still seriously doubt we’ll get any decent lift in wage growth anytime soon.

That said, at least one element of good news in recent Budget announcements is that we’ve not seen the downgrades to the budget outlook seen earlier – thanks to more stable commodity prices, and improved global financial markets.  But what China and the market’s giveth, they can just as quickly taketh away.

Yet thanks to the magic of the persistently improving Budget projections, we’re now quick to use up any Budget windfalls even before they’ve been truly earned.

Treasurers have become accustomed to simply focusing on this automatic improvement in the budget - as if it were their work – while downplaying short-run budget overruns and/or disappointing near-term economic growth.