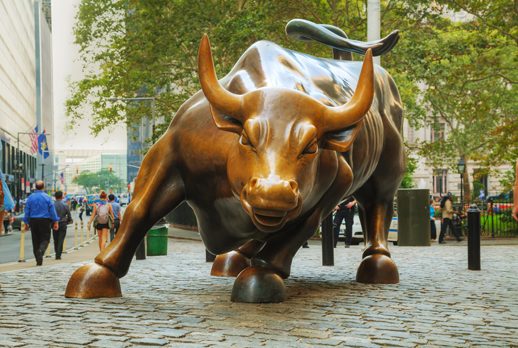 A lot of ink has been spilt over the share market rout in recent days and for the sake of completeness I guess of should offer my own perspective.

For starters, I agree with Peter that this is probably just a short-term market correction that will prove to be a good buying opportunity within weeks or months – if not days.  Indeed, in many respects this was the “correction we had to have.”

Of course, one often hears that markets are “overbought” or “oversold” in the short-term. What exactly does this mean and how can we tell?

It basically means markets have rallied so hard within a few days or month that buyers are exhausted – many short-term traders are keen to take profits and new money is reluctant to get into the market unless prices drop back a little.

One common technical measure of this is known as the relative strength index or “RSI”. Without going into the details, this tells us that a market is overbought when it breaks over 70 or so, and oversold when it drops to 30 or less. As seen in the chart below, after a super charged lurch higher in stock prices during January, the daily RSI indicator hit almost 90 on Friday, January 26 – one week before last Friday’s rout.  Indeed, it was the highest RSI reading at least since when the late 1980s.

On this basis, the market was clearly “overbought” – big time. 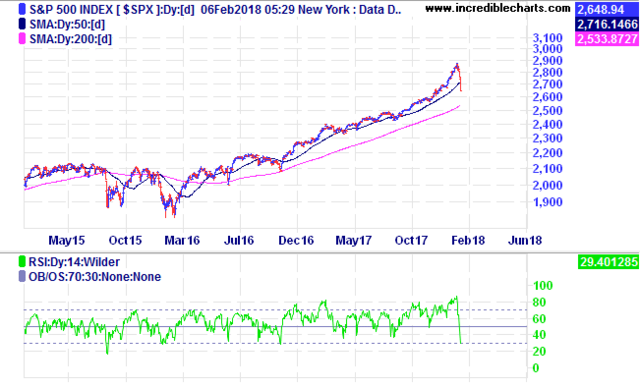 Indeed, we had a similar ugly decline in the market in August 2015, which at the time was blamed on China’s collapsing share market, Greek debt problems and concerns the Fed was inching closer to raising interest rates for the first time since the financial crisis (which it eventually did in December). Note, however, the market was much less “overbought” in 2015 than it was before this year’s rout.

In 2015, the worst of the rout was over within 5 days with the S&P dropping 11% (and the RSI touching and “oversold” 17).  The markets then staged a recovery before succumbing to a collapse in oil prices and European financial jitters in early 2016. Apart from tremors associated with Brexit and Trump’s victory, the market has since rarely looked back.

One take-away from all this is that the longer market rallies last, and the more that volatility is crushed to very low levels, then like a wound spring, the deeper and faster is the inevitable correction.  That makes sense: the more investors bet on low volatility continuing, the bigger the unwinding of positions needs to be when turbulence again rears its ugly head.

So where are we now? Following Monday’s market slump on Wall Street, the S&P 500 was down almost 8 per cent from its closing high on January 26 and the RSI had touched 30.  That’s still not as big as the 2015 share decline and given the extremely good market run with low volatility in recent months, chances are more pain will be needed in the short-run before markets are capable of stabilising.

Meanwhile, all market declines are driven by fears over the fundamentals – and its only if those fears prove misplaced are markets able to rebound. After all, if Europe and/or China did implode – as then feared a few years ago – market would clearly not have rebounded in the way they did.

Today the fear is that US wage and price inflation is finally taking off given tight labour markets, which if true would tend to suggest America’s long economic expansion is finally exhausting itself.  This would be a classic of end of cycle inflation burst – more reminiscent of the 1950s to early 1970s - that central banks typically feel the need to snuff out with higher interest rates, which inevitably creates the next recession and bear market in stocks.

That may well be what eventually kills this bull market – but due to extreme competitive price pressures, my hunch is that we’re still at least a year or two away from this possibility. Having spiked higher last month (partly due to statistical quirks and one-off factors), I suspect US wage inflation within the February payrolls report will ease back down again, providing some relief to nervous investors. And even if it did start to gradually creep modestly higher, it would be no bad thing if this helps support consumer spending (and in turn corporate earnings) whilst leaving consumer price inflation still reasonable well contained.