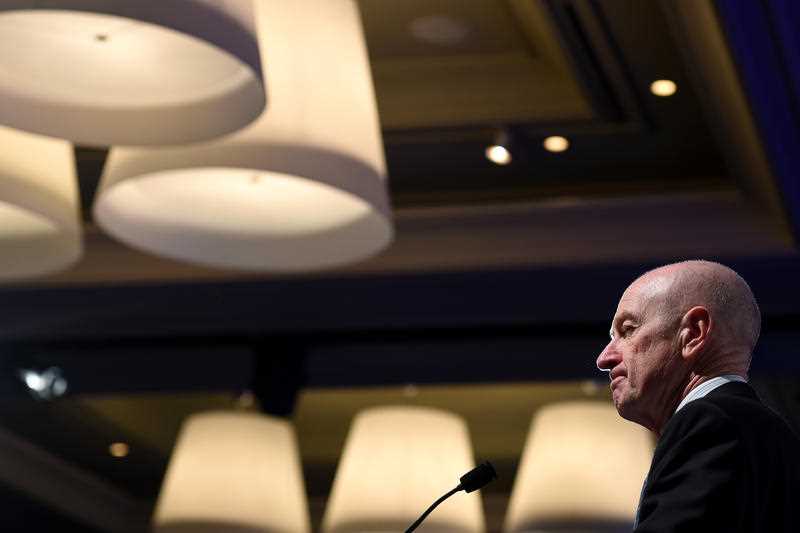 Could another rate cut be on the cards?

As if the Reserve Bank has not got enough to worry about, tentative signs of a slowdown in the United States economy have helped push the Australian dollar higher in recent weeks – for the all wrong reasons – which adds to the pressure on the RBA to lower interest rates further.

I say for all the wrong reasons because it would be less bad if the Aussie dollar were rising due to strong global economic growth – which is usually associated with firmer commodity prices. But to the extent weak US economic growth might delay the expected rise in US interest rates, it pushed up the Aussie dollar due to our still relatively high interest rates by global standards.

A higher Aussie dollar and weaker global growth is the worst of all worlds as far as our economy is concerned.

As I’ll detail below, however, thankfully the US slowdown still appears largely temporary in nature – which should mean the Fed will hike rates within coming months. That said, this outlook could remain murky for a while longer, keeping the Aussie dollar high.

And there’s still a risk that the ever-cautious Federal Reserve Chair Janet Yellen hints at further delay in policy tightening in an important speech on the US economy this Friday.

Of course, the RBA’s own mixed messages have not helped its cause of late. After cutting interest rate earlier this month, and again trying to talk down the Aussie dollar, the RBA maintained its usual practise of dropping reference to the “scope” to cut interest rates further if need be in its post meeting policy statement.

Many local economists - who should know better - wrongly took this to mean the RBA was signalling a move to a neutral policy bias, i.e. it was not keen to cut interest rates further this year.

But as I argued at the time, it’s normal for the RBA to adopt more neutral language in monthly statements associated with an interest rate cut – as was evident through 2013. And Deputy Governor Phil Lowe reiterated this in comments following a speech yesterday.

That being said, given the desire to push down the Aussie dollar it does make one wonder why the RBA maintained this usual practise.

What it does suggest, however, is that come the June policy meeting – at which the RBA is unlikely to cut interest rates – the more explicit easing policy should make a welcome return to its post-meeting statement.

As for the United States, I still feel it’s too premature to suggest the sharp slowdown in growth during the March quarter is a portend of an extended period of weakness. Let’s not forget the US economy faced a barrage of negatives last quarter – poor winter weather, industrial disputation in a key trading port, a slump in oil production, and the sharp rise in the US dollar.

Disruptions associated with the weather and industrial disputation will pass, and oil production should stabilise given the recent rebound in prices. Although not helpful, a rising US dollar should also not be a major negative for the economy due to its relatively low reliance on international trade. The US dollar overall is still far from expensive relative to its long-run average.

Most of the key US economic data is only available up until April, which is probably too early to expect a solid recovery from the Q1 slump. Looking at the data in detail, meanwhile, US jobs growth still remains solid, with 223,000 new jobs in April alone.

And while the US manufacturing (ISM) index has dropped in recent months, it remains comfortably above the 50 expansion line, while the non-manufacturing index has remained quite firm at over 55. 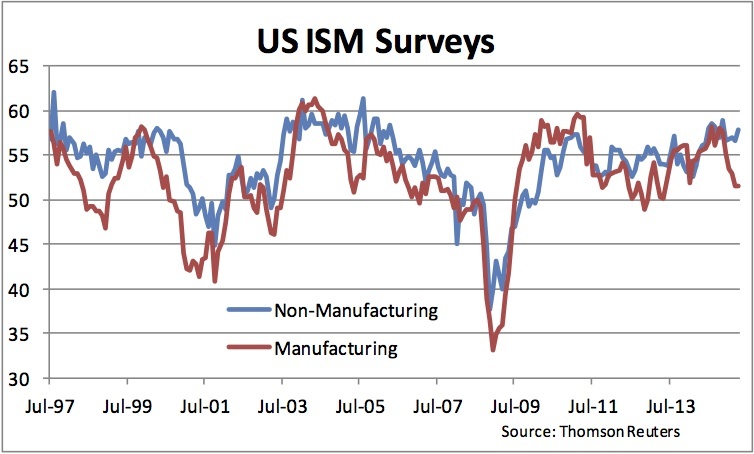 The spring thaw has also produced a large April bounce in US housing starts. And the dips in consumer confidence in recent months have not unwound the broad uptrend evident for the past few years. 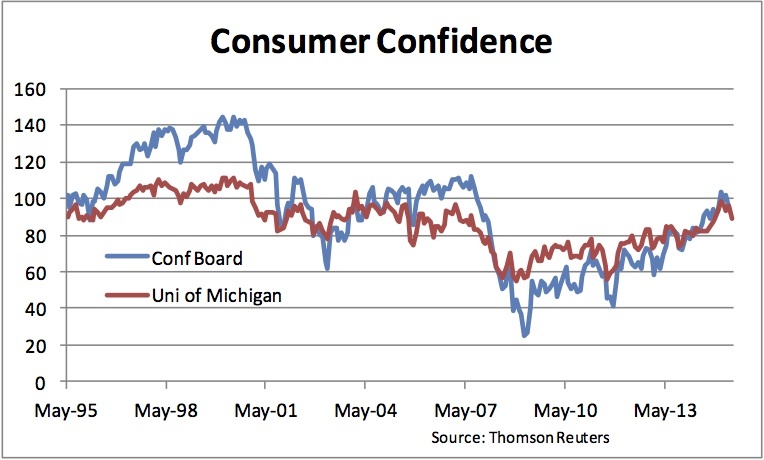 All up, while we should not underestimate the ability of ultra-dove Janet Yellen to backpedal on the US interest rate outlook later this week, I still feel the US economy is unlikely to become a major new source of worry for the RBA.

But that still leaves the RBA with plenty to worry about. The good news is that the latest Federal Budget has been well received and should likely produce a pop higher in both business and consumer confidence in the months ahead – and potentially a boost in retail sales as small business rush to use their accelerated depreciation allowance for capital goods purchases before the end of the financial year.

But I suspect the Budget’s “sugar hit” will not last much beyond June. If conditions slump back again and the Aussie dollar remains uncomfortable high, the RBA may well be on track to cut rates again in August.