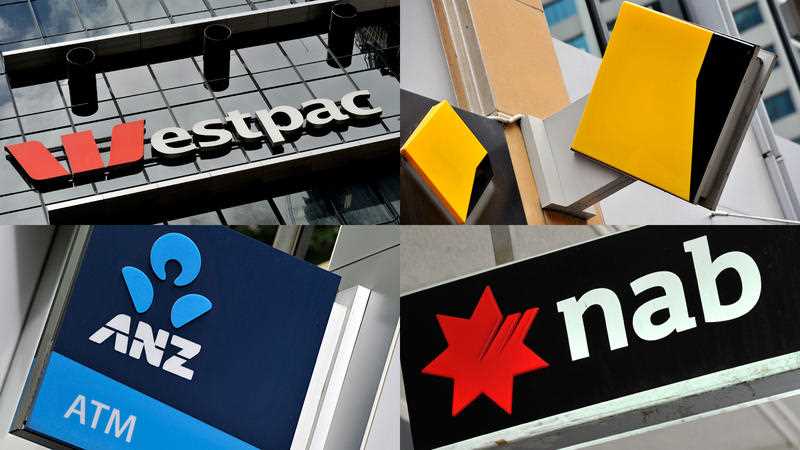 The recent decision by Australia’s major banks to unilaterally lift mortgage interest rates has not been met by the usual wailing from our politicians.

Indeed, it’s hard to believe that banks have been able to get away with lifting rates on investor property loans by a full 25 basis points without widespread national condemnation of their greed. Banks have even lifted rates on owner-occupier loans, especially those provided on interest-only repayment terms.

Of course, the big difference this time is that the rate rises appear to have the tacit blessing of officials.

Indeed, given that both the Reserve Bank and the Australian Prudential Regulation Authority (APRA) want to slow investor activity in the housing market, any crimping in demand due to bank rate rises would be welcome. Banks probably figure that they might as well jack up rates to slow demand (in the process helping their profit margins), rather than have the RBA jack up overall funding costs and/or have APRA force them into non-price forms of credit rationing.

For bank shareholders this is good news – allowing banks to slow housing demand through a widening in net-interest margins is probably the best-case outcome they could hope for. In turn, this could help bolster bank return on equity (ROE) and limit the risk of a cut in dividends and/or further capital raisings.

As noted by RBA economist David Norman*, bank return on equity had averaged around 15% over the past five years, though recently dropped to just over 10% largely because of capital raisings (reduced leveraged) to meet higher capital standards as set by APRA. 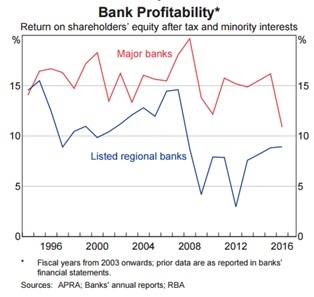 Here’s the bad news: according to Norman “it is unlikely that ROE will return to the levels that major banks and their investors had become accustomed to without the banks taking additional risk or achieving substantial productivity gains.”

Theory suggests, however, that banks should be rewarded by reduced leverage through a decline in their “cost of equity”, which can be broadly tracked by changes in bank price-to-earnings valuations i.e. to the extent reduced leverage results in reduced risk, it should be reflected in a lift in bank valuations, all else constant. But this has not happened – cost of equity has remained broadly unchanged at around 12%, which is even more striking given the decline in government bond yields over this period. Back in the late 1990s, by contrast, bank cost of equity decline notably (i.e. bank valuations rose) as interest rates declined. 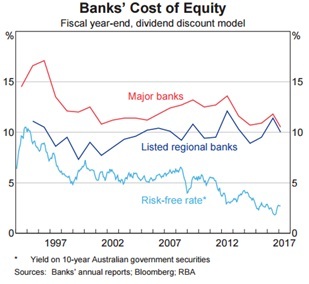 By contrast, Norman estimates the “implied equity risk premia” for banks has risen by almost three percentage points since the financial crisis. 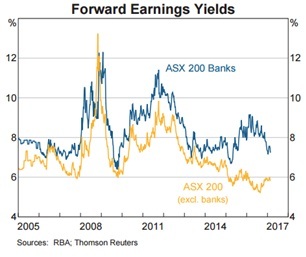 Why? Ironically, although improved bank capital adequacy should reassure investors about bank safety, the lingering risks of further capital raisings appear to have generated counter-veiling upward pressure on their “risk premium” – and hence the effective cost of equity – facing banks.

All up, this suggest that to the extent fears of further capital raisings ease, it could lead to a belated reduction in bank cost of equity – and hence relative valuations. And improved valuations seem even more likely if banks are able to at least partially restore return on equity through fatter net-interest margins.

*Returns on equity, cost of equity and the implications for banks, RBA Bulletin march Quarter 2017