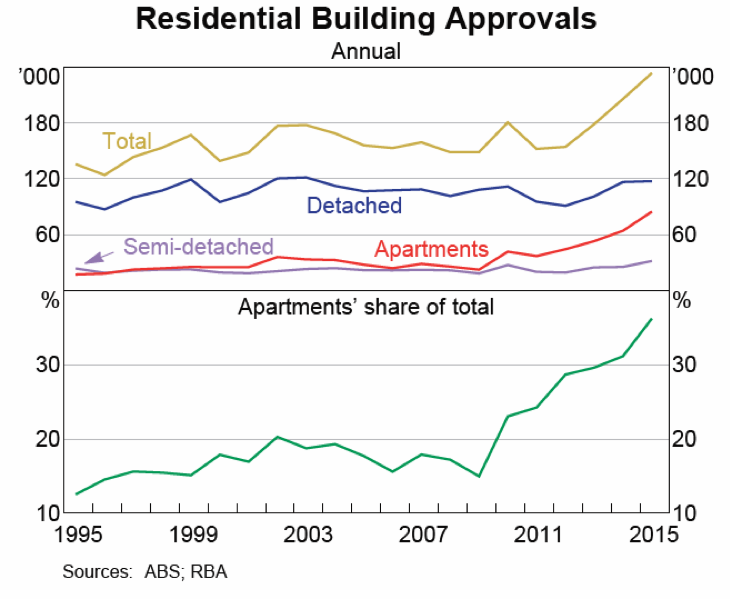 Are apartment prices set to plummet?

One of the more remarkable features of the Australian economy in recent years has been the surge in building of high-rise apartment blocks. For a variety of reasons, building of this nature has taken off since the global financial crisis, and has been an important factor underpinning Australia’s so far relatively smooth adjustment to the post-mining boom environment.

Of course, all this begs the question: do we have bubble conditions, and is the price of apartments likely to crash in the years ahead? Which States are more vulnerable? And if prices do crash, what will this mean for the price of established homes across the country?

For starters, let’s note most of the growth in apartment supply in the past few years has been in Melbourne, Sydney, Perth and Brisbane.

The good news is that, so far at least, a nation-wide excess of housing supply does not yet seem apparent. As the Reserve Bank noted in its recent Statement on Monetary Policy, rental vacancy rates in Sydney, Melbourne and Brisbane “have only risen a little, to be around their long-run averages.” That said, to clear the market, growth in rents has slowed to a crawl in most cities.

In Perth, moreover, there are much more obvious signs of excess supply, as the surge in completions in recent times has coincided with the post-mining slump in state income and population growth.

Perth rental vacancy rates have shot up and rents are falling.

What’s more, even in these other cities, it’s far from clear a larger shakeout won’t happen at some stage down the track. There’s still a large pipeline of approvals that have yet to be commenced. And due to the relatively longer lead times between the approval and completion of high-rise apartments (compared to stand-alone homes), there’s a greater risk of an imbalance between supply and demand developing – as is evident in commodity markets (like iron ore!) where supply takes a long while to adjust to demand. 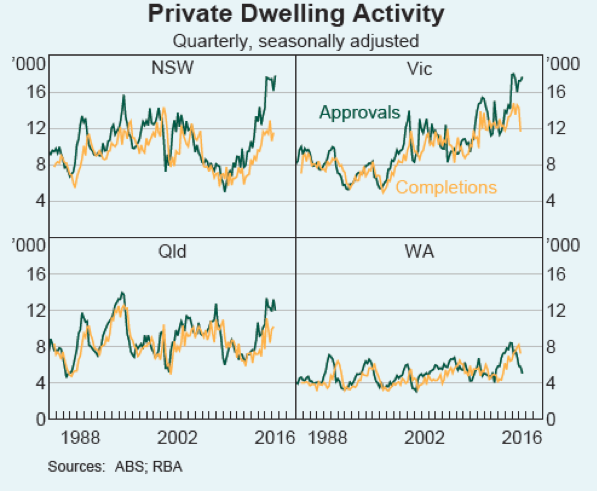 The added risk for apartment markets is that relatively more buyers tend to buy “off the plan”, with only small up-front deposits. That can give rise to purchase defaults later if when these apartments are completed, their market prices are much lower than the mortgage commitments of buyers.

For several reasons, Brisbane and Melbourne apartment prices appear relatively more vulnerable than Sydney’s. For starters, as the RBA has noted, their supply expansion has been greater – equal to around one third of the stock of existing apartments in these cities compared to one fifth in Sydney.

And thanks to an easier and more centralised approval process, relatively more of the supply expansion in Brisbane and Melbourne has been concentrated around the inner city, whereas it’s been more widespread in Sydney. Last, relatively more of purchases in Brisbane have been by interstate investors in search of better yields. In Melbourne, foreign buyers have been relatively more important (which is OK provided the demand holds up), whereas in Sydney, there’s been a broader spread of interest from owner occupiers, foreign buyers and investors.

As noted, so far at least, vacancy rates suggests these capital city markets (apart from Perth) are fairly well balanced, and the RBA notes there’s little evidence yet of buyers failing to settle their purchases. But that could change.

That said, I’d also note that Australia’s housing market is quite regionally compartmentalised. As evidenced with the recent shakeout in Perth, yet boom conditions in Sydney, weakness in one part of the country (or even one part of a city) does not necessarily imply broad-based national weakness.

Indeed, the vast bulk of established home owners across the country should be relatively immune should an eventual correction in the inner-city high rise apartment markets of Melbourne, Brisbane (and possibly even Sydney) take place.