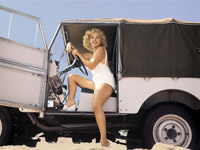 My mum bought a Jeep

The motor vehicle census provides a perspective on consumer spending and is important for suppliers and manufacturers of fuel, car part suppliers as well as toll-road operators.

Most economic data is obtained by way of a survey. It is rare for economic data to reflect a total count – or census. A population census is conducted only once every five years. But a census of registered motor vehicles is conducted each year. So we have an accurate representation of motor vehicles in Australia, together with a break-up across types of vehicles and across states and territories.

Highlighting the changing nature of Australian society, the number of Ford and Holden vehicles on the road over the past year has continued to fall. Only six of the top 30 makes recorded declining registrations over the past year and Holden and Ford were amongst those. In contrast, the heavy marketing of Jeep vehicles has proved successful – Jeep numbers soared by 20.5 per cent over the past year, ahead of a 14 per cent gain by Audi and the fastest growth of any top 30 make of car recorded in at least the past eight years.

One of the best performers in the autos sector of the sharemarket over the past year has been Schaffer Corp (SFC), up from $4.05 to $6.05. SFC owns 83 per cent of Howe Automotive Limited (Howe Leather), which supplies leather to the global automotive industry.

What do the figures show?

As at January 2014, there were 17,633,493 motor vehicles in Australia, an increase of 2.6 per cent over the year. Fastest growth was recorded by motor cycles (up 4.8 per cent) while the number of “non-freight carrying vehicles” rose by only 0.7 per cent.

Over the past five years, motor vehicles rose on average by 2.5 per cent a year with motor cycles again recording the fastest growth of 4.7 per cent a year.

Across states & territories, fastest growth in the number of vehicles in the year to January 2014 was in Western Australia (up 4.6 per cent) while vehicles rose by 1.3 per cent in Tasmania.

Fastest growth in registered car makes over the past year was Jeep (up 20.5 per cent) followed by Audi (up 14.0 per cent).

For the fifth straight year, the average age of all vehicles registered in Australia was 10.0 years.

Why is the data important?

Of the weekly household budget, the biggest item of expenditure is ‘paying off the home loan’ with number two being ‘paying rent’. But number three is ‘purchase of a car’ – either by loan, lease or outright purchase, buying a car is a major consideration of the average family. And close by in number four position is the ‘purchase of petrol’.

Car affordability continues to rise – currently at the best levels since the mid-1970s. Interestingly, while more cars are being bought, older cars aren’t being retired, so growth in car numbers continues to outpace the number of people in the country.

The conservatism of Australian families is highlighted by the fact that many are choosing to hold on to their older vehicles despite great car affordability. From a public safety perspective, the relative high average age of the cars on the road is worthy of greater consideration. In the early 1970s, the average vehicle was around six years old; today it is 10 years old.