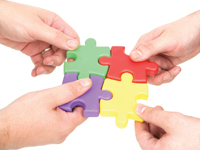 Pieces of the economic puzzle

GDP is comprised of household, government and business spending, both on every-day consumption and investment. Some of the spending is done here in Australia on domestic goods and imports while some goods are purchased abroad in the form of exports.

Some of the household consumption data has already been released for the March quarter in the form of retail trade. Retail spending rose by 1.2 per cent in real (inflation-adjusted terms) – the strongest growth in four quarters. So the early expectation is for a solid lift in the economy in the first three months of the year.

In the coming week, early data on trade (exports and imports) for the March quarter is released on Tuesday. But the more formal quarterly figures are issued a week later.

On Wednesday, construction work done estimates for the March quarter is released. This data will include the figures on residential investment that are included in the GDP equation.

And on Thursday, the ABS issues the data on business investment – otherwise known as private sector capital expenditure. But not only does the data show spending on new buildings and equipment, there is also a forward-looking component – estimates of spending in the June quarter and the following financial year.

We estimate that there was little change in business investment in the March quarter as companies held off on spending plans before the May Budget and potential scrapping of carbon and mining taxes. Investment may have fallen 0.2 per cent in the quarter. We expect that the second estimate for spending in 2014/15 will be $129-130 billion – around 22 per cent higher than four years ago, although down from peak levels in the past few years.

In the week starting June 1, data on exports, imports, inventories (unsold production) and government consumption and investment are released ahead of the GDP figures on June 4.

Other data to watch

Apart from the GDP components, there are a few other things to watch. On Monday the ABS produces another issue in its “Spotlight on National Accounts” series – a series that attempts to provide more background information on its quarterly National Accounts publication that contains the economic growth estimates.

On Wednesday, the Bureau of Resources and Energy Economics releases its six-monthly estimates of the projects mooted or underway in mining and energy sectors. On Thursday the Housing Industry Association releases data on new home sales for April. And on Friday the Reserve Bank issues its private sector credit (loans outstanding) estimates for April. The former two indicators provide some “forward-looking” perspectives while the latter data largely looks in the rear-view window.

Credit probably rose by 0.4 per cent in April, taking the annual rate to a five-year high of 4.5 per cent. Aussies are borrowing again, but still relatively cautiously.

Health of the US economy in the spotlight

In the coming week, there is a raft of figures that can shed light on the strength of the US economy with data covering consumer, business and housing sectors.

The week kicks off on Tuesday with figures on consumer confidence, home prices (two measures) and durable goods orders (business investment) as well as the influential Richmond Federal Reserve index.

Durable goods orders (goods that last three years or more) may have edged 0.4 per cent higher in April while the CaseShiller home price index may have lifted 0.7 per cent to stand 12 per cent higher than a year ago. Meanwhile consumer confidence is tipped to rise from 82.3 to 83.0 in May. Also on Tuesday are the usual weekly figures on chain store sales.

On Wednesday the weekly housing lending data is issued. While on Thursday, data on pending home sales is issued together the second estimate (preliminary reading) of economic growth in the March quarter. Also released on Thursday is the weekly data on jobless claims or new claims for unemployment insurance.

The good news is that jobless claims are at 7-year lows. The bad news is that the harsh winter weather may have caused the US economy to contract by 0.2 per cent in the March quarter.

And on Friday economists expect that a 0.3 per cent lift in personal income to have outpaced a 0.2 per cent lift in spending in April. The Chicago purchasing managers index and final consumer sentiment index for May are also due on Friday.

Gold has had a good, but not great start to 2014. But it certainly has out-performed most resource prices with the exception of nickel.

After being up almost 15 per cent since the start of the year to US$1,379 an ounce, gold has since retreated to around US$1,300 an ounce – a level where it has generally held for almost two months.