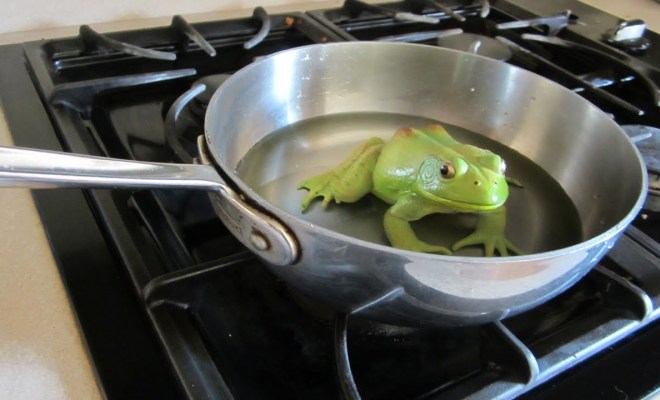 The reality of our stalled super contribution

Nobody likes being compared to a frog in boiling water, or I assume not, but that’s what’s happening to employee superannuation scheme members in relation to the percentage of their salary that their employers are tipping into their superannuation accounts.

Essentially that number, which started back in the Paul Keating era with a forgone wage increase of three per cent, is now at 9.5 per cent but it’s been stuck there since 2014 and on current form will remain there for another three years, or seven years altogether, until July of 2021.

Those readers whose businesses have to make that compulsory contribution, or Superannuation Guarantee (SG) as it’s officially called, are probably glad to hear this but I’d argue that until the contribution starts to go up, the day when our retiring workers are going to be financially self sufficient in retirement is going to sit just on the horizon as a form of mirage.

And for as long as that is the case and they don’t have enough put by, they’ll be reliant on the age pension to a greater or lesser degree, and we taxpayers will be footing the bill.

So what’s with the boiling frog analogy?

The key point about the unfortunate amphibian is that if you put it in a water filled pot at room temperature and start to heat it, Mr Kneedeep won’t think to jump out until it’s too late.

The same gradual distortion’s going on at the moment with ordinary workers’ super contributions: because they’re not increasing unless the worker’s pay goes up. Many of those workers won’t accumulate enough super to stand on their own financially by the time they retire, and by that time it will be too late.

There’s a lot about the ALP’s policies on Super I don’t much like, mostly because their pursuit of real or imagined fat cats penalises much bigger numbers of ordinary savers, but one of their sounder efforts was back in 2010 when they decreed that by July 2019 the SG would climb from the then 9 per cent to 12 per cent.

The current Coalition government initially postponed that proposal by three years to 2022, then stalled it again by a further three years, such that it won’t hit 12 per cent until July 1 of 2025. That’s a six year postponement, which in frog boiling terms is a mighty long time.

Back on July 1 2014 that delay meant nothing, as both sides of Parliament were agreed on 9.5 per cent, but as of now the SG would have been 1.5 per cent higher, at 11 per cent, had Labor been in power.

The Financial Services Council’s 2018 pre-budget submission uses a University of Canberra NATSEM report to note that even just a two year delay in getting to 12 per cent would knock $39,000 off the total of retirement savings that a person planning to retire over the next decade would ordinarily hope to accumulate.

And of course the effect is more significant for people just starting out in the workforce, because of the snowballing effects of compound interest.

Overall, it says, “the delay to the increase in the SG to 12 per cent will result in a cumulative impact of around $40 billion less in super savings in the system over the next seven years.”

It throws in a few other demographic bombs, quoting the 2010 Intergenerational Report as saying that:

One, the ratio of working aged people relative to retired people will halve from around 5 times today to 2.7 by 2050.

Three, the proportion of Australians of working age will fall by seven percentage points to 60 per cent of the total populace in 2050.

Of course it’s a bit simplistic to cheer for increased compulsory employer contributions when there are so many other moving parts in Super.

Someone has to pay for it, and employers will have a raft of arguments explaining what a burden it already is.

They would note that most workers would sooner have a bit more cash in hand by way of a pay rise, than the less tangible benefit of having a bigger super account when they retire in what may be a decade or so’s time.

Which is why a lift to SG would probably have to be legislated to take the place of any CPI-liked wage increases. Sometimes the Government has to act in people’s best interests.

But employees already have the option of making a pre-tax salary sacrifice, up to $25,000 a year, if they want to build up their nest egg any faster than the obligatory minimum.

There are plenty of people in the Coalition who don’t actually like superannuation, seeing it as an unnecessary drag on the economy, a burden on employers and an exercise in Nanny State interference in people’s lives.

But one of the telling quirks in the voter perception of all this is that our Federal Politicians and Public Service already enjoy an SG of 15.4 per cent, as pointed out by demographer Bernard Salt in the latest Weekend Australian Magazine.

To quote Bernard, “how can politicians carry on about the unsustainability of today’s retirement concessions and retain a straight face?”He notes correctly that politics is a shaky business but suggests things are not a lot different in the private sector these days.

“No one’s job is guaranteed and no one’s job should be underwritten by an overly generous superannuation scheme that is out of whack with that of the average worker.”

He might have over-egged things with his comment about “overly generous” but it’s the old example problem come back to haunt us.

For as long as we have to put up with that Canberra based approach of “don’t do as I do, do as I say,” there will be a lot of entirely justified resentment among that embattled and proportionately shrinking cohort of people called ordinary wage earners.