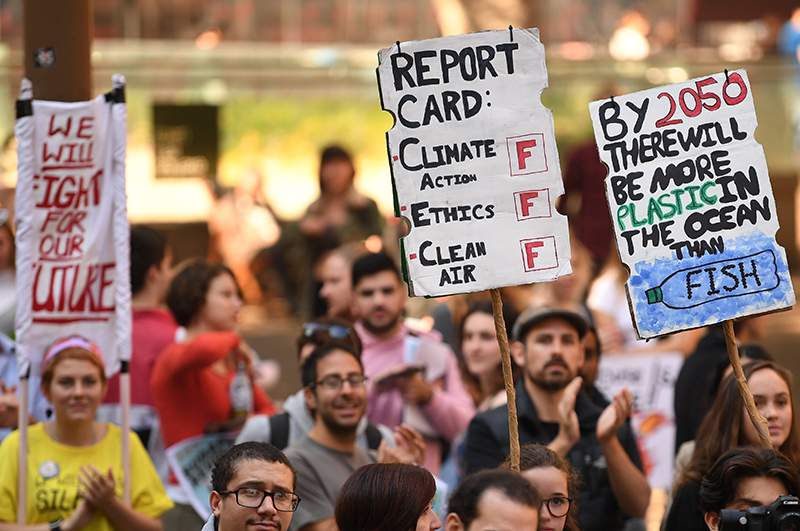 Should listed companies work with activists?

Where do you stand on the debate about how much listed companies should work with activists?

This thorny issue came up in a recent interview in the AFR magazine with BHP chief executive Andrew Mackenzie, who made it clear that his mining company is onside with a lot of activism about climate change, for instance.

Not long afterwards, Treasurer Josh Frydenberg bought into the debate, essentially saying it’s a company’s job to make money for its shareholders, and it’s the government’s job to create an environment where that can happen.

He didn’t use the phrase “stay in your lane” but that’s the new buzz phrase from people who agree with Josh. You can probably also throw in “virtue signalling” as part of the Josh supporters’ armoury of pet phrases, on the basis that they believe it’s grandstanding when you start any talk about making the world a better place.

The Mackenzie article noted that BHP is nowadays buying into issues like indigenous rights, climate policy and gender diversity.

If you ever choose to look at the comments section attached to stories in The Australian on the subject, you’d conclude that the single overriding aim of companies should be to make money for their shareholders, with all other considerations being not only irrelevant but also perhaps a kowtow to dangerous lefty notions.

It’s a reality that corporate life used to be a lot simpler: companies made things and built things, miners mined, and hopefully exported as much as possible and even paid a reasonable amount of tax. Case closed, the old brigade might say.

Mackenzie, meanwhile, noted to the AFR that he had never felt a tension between his fiduciary duty and his ability to make a positive impact on society through his work.

“One way you can get a little bit off the hook of the fiduciary duty is to say, for example, we are running this company for the benefit of both current shareholders and future shareholders,” he was quoted saying in the article.

BHP’s position, for instance, is that it doesn’t want to open any more thermal coal mines than the ones it has already in New South Wales and Colombia, which are up for sale.

That’s where you can see where Mackenzie’s futurology and the hard realities of capitalism actually align: global demand for thermal coal is dropping as coal fired power stations close and aren’t replaced, so it makes economic as well as ecological sense to wind that part of the business down.

It’s logical to assume most Scottish CEOs have a fair understanding of what profitable activity looks like.

What’s mightily clear to him and to a lot of people who don’t automatically cheer for coal is that there’s a lot of reputational risk at stake here, no matter what coal supporters choose to say. And that public opinion is moving his way.

A recent survey by the Sydney Daily Telegraph, for instance, revealed that almost two thirds of responders believed humans are responsible for climate change, and that two thirds believe Australia should have a national target of net-zero carbon emissions by 2050.

Plus, 81% of responders said they were concerned about more droughts and flooding caused by climate change.

It’s likely that climate sceptics weren’t big responders to the survey but on the other side of the coin, Rupert Murdoch’s Sydney Daily Telegraph is hardly a hotbed of dangerous lefty chatter. The climate debate has gone firmly mainstream, from the recent very well attended school strike level right up to and including The Economist’s latest edition, which devoted most of an entire issue’s coverage to the issue.

The UK based magazine summed up its position on the topic by noting that “Climate change touches everything this newspaper reports on. It must be tackled urgently and clear-headedly”.

But before they take issue with the magazine, sceptics should note that The Economist was careful not to say the sky is falling in. That’s a canny nod to the people in the middle, who believe climate change is real but who feel, correctly or not, that the issue has been overblown.

“It is important to understand all the things that climate change is not,” it notes. “It is not the end of the world. Humankind is not tottering on the edge of extinction. The planet itself is not in peril,” it states, adding that “climate change is, though, a dire threat to countless people’’ by variously flooding places and drying up wells, damaging crops, melting glaciers etcetera.

The good news for shareholders, meanwhile, is that a lot of the companies they are invested in can’t really do a great deal to limit climate change. Service companies, for instance, which make up a growing percentage of ASX listings, can recycle more rubbish and economise on travel but they can’t remake themselves. But airlines, for instance, can and do do a great deal to reduce their carbon footprint, testing new biofuels and doing more to reduce waste.

That sort of approach collided head on last week with Prime Minister Scott Morrison and assistant minister Ben Morton, who took the long handle to businesses they said campaigned on what they described as “so-called activist issues.”

“Too often, big businesses have been in the frontline on social issues, but missing in action when arguing for policies, which would grow jobs and the economy,” said minister Morton.

That got a strong response from Qantas CEO Alan Joyce and Virgin CEO Paul Scurrah, who last week happened to be campaigning to reduce the monopolistic fees charged by Australia’s bigger airports. (Another issue that’s not related to climate change).

“We have to do both,” said Mr Joyce, referring to making profits and planning for a more global approach to governance.

“We’re not going to pull back on what we say on social issues because that’s important to our employees, our customers, and our shareholders,” he added, noting that Generations Y and Z now comprise 50% of the workforce and 80% of them say they want to work for a company with a social conscience.

I’d say we haven’t heard the last of that debate about companies pushing activist causes.

There’s a further point on the other side of the coin that has barely had the chance to surface in recent weeks, and that’s the whole issue of how big groups of people with strongly held views are now getting together to cause companies to change their policies.

Again, this isn’t a climate change issue, but it’s certain to loom larger in the activism debate. Just look at the effect of a social media campaign against 2GB Radio breakfast shock jock Alan Jones by two social media organisations, one with the interesting name of Mad F***ing Witches. It was apparently based on an careless comment by immigration minister Peter Dutton.

They tackled not Jones but the advertisers on his show on the issue of misogyny  and within a short time no less than 24 advertisers had pulled out of the show. It was so effective that 2GB management is currently conducting “a full review” of Jones’s show, on the clear but unexpressed basis that if the advertisers bail, Jones may find himself on much thinner ice than before.

What’s clear is that until that grassroots campaign, Jones was remarkably safe because the sheer weight of advertising dollars closed down debate.

Not anymore. Employees and consumers are now firmly on the march on a range of hot button issues and companies will have the choice of either trying to beat them, or join them.  Because of the explosion in social media, the latter course now looks a lot more likely to succeed in the long run.