In today’s globalised world, all companies are part of a value chain and work in an ecosystem. Having a global research network like Fidelity’s provides local touch-points to each part of the value chain and allows us to build a superior understanding of the profit pool and the pricing power inherent in each value chain. This enables smarter investment decisions. Importantly, having access to a global research engine allows us to understand disruption and anticipate its impact on other industries and regions faster than the market.

Over my tenure on Fidelity Global Equities Fund, we have identified a number of the pricing power-winners of this brave new world. Take the case of portfolio holding Facebook. The company’s ability to find a non-intrusive method of monetising its huge user base, combined with a series of fortuitous acquisitions (Instagram and WhatsApp), has meant it now owns the entire landscape of social interactions. (See table). This gives it pricing power. Notably, Facebook’s exponential growth path has dented the pricing power of companies in other sectors, such as news media and TV, by causing behavioural changes in how customers access content. 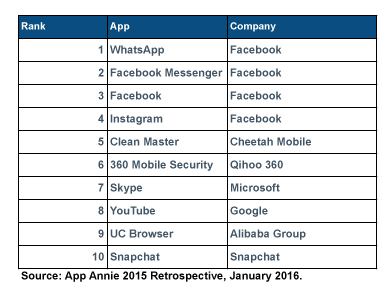 Another example, portfolio holding Amazon.com’s pricing power comes from being the most efficient and lowest cost provider of service in its chosen verticals. The e-commerce and technology infrastructure company has three main areas of differentiation: Marketplace, Amazon Web Services and Core Amazon Prime.

Retail platform Marketplace has high competitive barriers to entry and scale, and has driven massive change, using high traffic on Amazon sites for the benefit of a larger number of subscribers. Amazon Web Services, meanwhile, has created an industry by becoming the backbone of the move to cloud computing. The Core Amazon Prime offering uses a tried/tested membership model perfected by Costco to build high-quality customer service.

Fidelity’s research team has identified this company’s powerful virtuous circle or “flywheel.” The bigger such a company gets, the more it can offer to its customers, attracting more customers, making them bigger and so on. Importantly, by offering cutting-edge proprietary technology and opening its platform to everybody, we believe Amazon has altered the usage of hardware and server time and has made renting IT infrastructure a reality. This has implications on the pricing power of firms such as Oracle, SAP and IBM, which is based on hardware sales.

Elsewhere, tower company SBA Communications has emerged as a pricing-power winner in today’s world. With the Apple iPhone having changed the paradigm of computing power on the phone, mobile devices are being used to consume information and entertainment. Data usage has multiplied manifold and the value of SBA’s mobile tower assets has grown proportionately to this increase in data consumption.

The examples above highlight those companies benefiting from technological change. However, there are still others that derive their pricing power from products or services with unique characteristics. In fact, holdings like data and analytics provider Verisk Analytics, a high-quality company with a moat that stems from its control of data in the insurance segment, exemplify this. Similarly, gaming business Nintendo is the owner of the world’s best game intellectual property and is unlocking value on non-Nintendo platforms. Peers Activision Blizzard and Square Enix are also well positioned to benefit from the gaming cycle and the secular shift to digital.

Notably, this is not a trend restricted to technology companies. Take industrials business Cognex, which makes machine vision products for factory automation and surface inspection. The company’s machines can read simple and advanced bar codes that allow the tracking of items around factories and distribution centres. Notably, the software component of the solution is the key differentiating factor, since interpreting the captured data is difficult.

Elsewhere, within the pharmaceuticals sector, the unique nature of their drug portfolios gives companies like Gilead Sciences – which has found a cure for Hepatitis C rather than offering a palliative offering – pricing power. On the flip side, those like generics business Teva Pharmaceutical Industries, Mylan and Sun Pharmaceuticals derive pricing power because of their ability to be the lowest-cost suppliers of certain drugs. Thus, opportunities abound but they need more effort to find. Also, in a fast changing world, one needs to be razor focused on the sustainability aspect of the pricing-power equation.

This is evident when it comes to the broader commodity sector, which is cyclical in nature. Until recently, the Chinese fixed-asset boom and resultant short fall in supplies had created significant pricing power. This has now completely reversed. Similarly, at this point in time, the energy sector lacks pricing power due to low oil prices but beneficiaries include airline and shipping businesses. This is expected to reverse once supply cuts allow pricing power to move back in favour of producers.

Similarly, some financials have lost pricing power derived from the liabilities side in the low-interest-rate environment. Nonetheless, stocks like UBS Group, which has a private banking franchise with increasing inflows and a wealth-management business with stabilising margins, and Julius Baer Gruppe, which has a high-quality franchise with  expected higher-than-average net new money growth, offer considerable upside. Similarly, Indian banks HDFC Bank and Kotak Mahindra Bank are offering interesting technology-led financial-inclusion solutions in emerging markets.

At the end of the day, the global equities universe is the richest opportunity set you can find and, as evidenced above, we look to invest in companies which are long-term winners with pricing power and yet available at reasonable valuations.

Amit Lodha is the portfolio manager for the Fidelity Global Equities Fund.