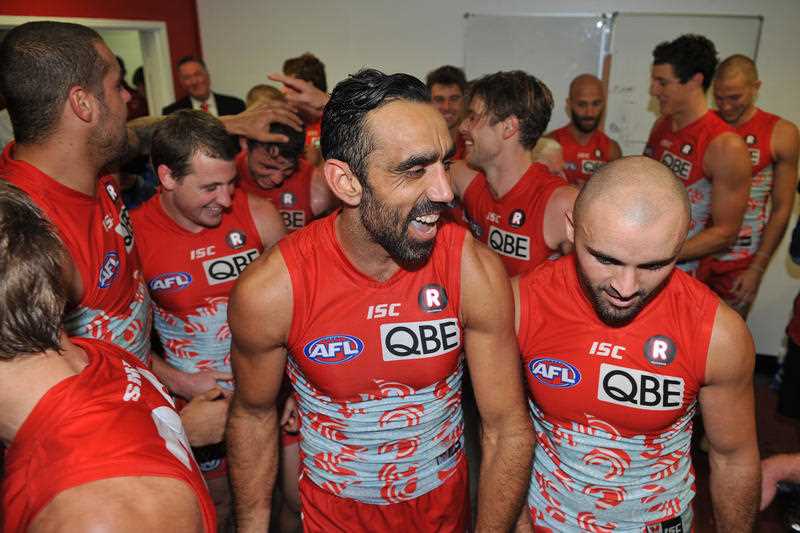 Good for the game?

The AFL star Adam Goodes can do whatever celebration he likes after scoring, but let’s not pretend he wasn’t trying to be provocative last weekend.

In the lead up to the Swans clash against Carlton last Friday night there had been widespread debate about the reasons supporters of other clubs – it was Hawthorn last week – were booing the two times Brownlow medallist every time he touched the ball.

Goodes was of course in the middle of another supporter controversy last year when a 13 year-old girl called him an Ape and was escorted from the ground by security and police. She later apologised to Goodes and explained she wasn’t referring to his race.

The Swans star accepted the apology but the event seemed to encourage in him a rage that surfaces regularly. Last Friday Adam used a celebration that he says he learnt from the under-16 Flying Boomerangs back in 2009.

If that’s the case, and we have to accept his explanation, then you would wonder why it has taken five years to use the spear throwing action dance as a celebration.

The AFL, for some reason, has an executive paid for by the competition’s 18 clubs who is called the head of diversity. On Monday, Jason Mifsud incredibly came out and said he hoped the goal celebration would become a widely accepted tradition in footy, like the haka is in New Zealand rugby.

Mifsud obviously doesn’t watch much rugby because the haka is only ever performed pre-match not during a game and not at all when a try is scored.

Then he had this bizarre explanation about what was going on. “Rather than be intimidated or antagonistic against another form of cultural expression, maybe it’s the precursor to cultural expression and dance becoming a really significant part of the next 100 years of our game,” Mifsud told Melbourne’s Herald Sun.

Seriously – aside from struggling to understand what that actually means let’s start being honest here. Adam Goodes is a recent Australian of the Year who considered the honour as a platform to spread his own version of what it means to be Aboriginal.

He calls Australia Day Invasion Day and prosecutes the case that indigenous Australians – his tribe he calls them – have been badly treated by non-aboriginal Australians. Adam then chooses the AFL’s indigenous round – why they have that is beyond me – to debut his war dance, knowing full well that it would create a media storm.

The AFL, which as an organisation is desperately politically correct having themed rounds for variety of causes – including an inclusion round to spread their idea of support for the gay community, immediately endorses what Goodes did.

In the past they have leapt upon players showing any sort of individuality, including holding their wrists together to indicate support for a friend who is in jail. So it’s ok to pretend to throw a spear at opposition supporters in an act of aggression, but frowned upon when you point to the sky for a dead relative or pretend to be handcuffed.

What would the AFL say if a non- aboriginal player had pretended after scoring to throw a spear at say – Adam Goodes or one of the other Indigenous players during Dreamtime round. There would have been – rightly – an explosion of protest and threats of bans and claims of racism.

What the AFL does with a round like the one just passed is create division not inclusion. At the MCG on Saturday night an Indigenous elder, Aunty Joy, welcomed supporters to her land to her MCG. We had leaf smoking ceremonies and aboriginal dancing.

Surely if you have to have an indigenous round it should be a celebration of aboriginal footballers, not about aboriginal culture. What we should have seen, given the game was between Richmond and Essendon, was a parade of some of the champion aboriginal players that have represented both clubs.

Let’s have a highlights reel of Maurice Rioli and Michael Long or if you really want to showcase the natural talents of indigenous footballers, use the pre-match for an exhibition game of under 18 aboriginal stars from around Australia.

The Goodes war dance has attracted so much attention because a silent majority of Australians are getting sick and tired of being made to feel guilty about events they played no part in. And when champions like Goodes ram down our throats expressions like invasion day we don’t like it.

Adam – who I have met once and found him to be a really engaging smart bloke – is a divisive figure. It’s not just his aboriginality but it’s the way, in the later years of his career, that he plays the game. He is very good at drawing free kicks and has an unfortunate habit of sliding into tackles with his legs that’s dangerous.

When Goodes is booed by the crowd some of those hurling harmless abuse at him would be doing it for that reason. I can’t believe that Hawthorn supporters two weeks ago were hurling insults at an aboriginal player given that one of their brightest stars is indigenous wizard Cyril Rioli.

The AFL now has a big problem of its own making on its hands. CEO Gillon McLachlan has endorsed the Goodes war dance, instead of insisting that the field was for playing the game, not conducting political statements aimed at a section of the crowd you want to incite.

McLachlan said what happened on Friday night was a celebration and that it wasn’t offensive. In contrast, AFL legend and the games most admired player, Leigh Matthews, said the actions unnecessarily incited the crowd.

What the AFL must now deal with is where to draw the line. Is it acceptable for players of other ethnic backgrounds to use goal kicking celebrations to signal their support for their place of birth or that of their father.

An Irish player showing the colours of the IRA perhaps? Clearly that cannot happen and Adam should have been told to take it easy with the propaganda. One hopes it was all because this was indigenous round and one can only hope that the AFL realises that most people go to the football to see a good contest - a game where you can support your side with good old fashioned barracking.

If that means booing an opposition player, then that needs to be tolerated, not interpreted as some racial slur and it shouldn’t be countered with a player pretending to throw a spear at you.

Steve Price is on 2GB nightly from 8 and is a regular on Channel Ten’s The Project.