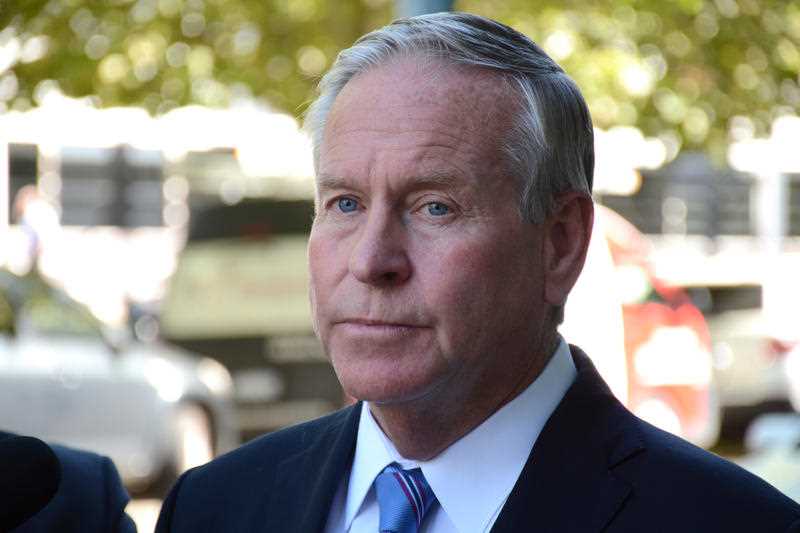 Barnett looks set for defeat, but blame will be shared

All sides of politics privately expect Colin Barnett will lose tomorrow here in Western Australia. If that happens, there will be plenty of blame to share around on the Liberal side.

There’s the poor state of the books, the lack of leadership succession planning, the Prime Minister’s unhelpful contribution on the GST and, of course, the preference deal with One Nation.

Let’s start with books. Barnett isn’t responsible for the rise and fall of the mining boom. But, as West Australians now watch their house prices fall, unemployment rise and state debt climb, it’s clear there wasn’t enough forward planning during the good times.

The Liberals are offering the more responsible path: selling off the power industry to help pay down debt and invest in new infrastructure. Sadly, they’ve done a poor job convincing voters privatisation is a good idea.

On the leadership front, even a casual observer can see Colin Barnett doesn’t have his heart in it this time around. He has been a loyal servant to the party over many years. After announcing plans to quit politics, he made a spectacular comeback to the leadership in 2008 when his party needed him most. He went on to win two elections and provide stable government in an era of turmoil elsewhere. Barnett has been Premier of WA since before Barack Obama was first elected and has seen four changes of Prime Minister in that time.

The “it’s time” factor has been building for Barnett, yet there’s been little effort by the party to promote a successor. Barnett is going to this election asking voters to give his government another four years, while openly admitting he won’t stick around for it. This time he means to go.

If the Liberals lose, Malcolm Turnbull will also cop some deserved criticism for mishandling the GST issue. While voters in most states would have no idea what their share of the GST distribution is, nearly everyone here in WA knows they get back little more than 30 cents in the dollar. It’s a far more powerful concern than many in the eastern states realise.

Last year, Turnbull promised to do something about it. Specifically, he pledged to introduce a “floor”, so states would never be dudded in the way WA currently is. He was cheered at the time. But during his one and only brief campaign visit, the PM back-tracked. The “floor” could only be introduced several years from now, he said.

This angered Barnett and his team. Some Liberals say it would have been better had Turnbull not made a campaign visit at all.

Above all else, the main talking point after Saturday night will be the One Nation preference deal. Did it help or hurt the Liberals? The general consensus throughout the campaign has been that this was a necessary arrangement for the Liberals, given One Nation’s rising popularity. The only way of ensuring some of those lost votes come back to the Liberal fold through preferences.

But as the campaign comes to a close, it looks more like this preference deal will turn out to be the baggage that ultimately costs the Liberals the election. Barnett has been unable to escape the deal. Every day he’s copped questions about hopping into bed with One Nation. Pauline Hanson has sucked all of the oxygen out of the Liberals’ campaign.

Not that the attention has helped her. One Nation has had a truly terrible campaign. From policy confusion to candidate chaos, legal action from long-serving office bearers and even an apology from Pauline herself, this has been a mess. Whether any of this bothers her loyal supporters is less clear. Many seem determined to give the major parties a kick in the pants.

One Nation’s campaign disasters, though, have left the Liberals looking even sillier for agreeing to preference them in the upper house. Especially when the Libs aren't getting much back in return. It turns out One Nation isn’t running candidates in as many lower house seats as everyone thought they would. So the deal is a little one-sided.

The arrangement has also mightily upset the Nationals, who, in fairness, have never had a great relationship with the Liberals in WA. It’s now worse than ever.

Labor’s Mark McGowan has undoubtedly had the best campaign of all the leaders and appears most likely to win. An election victory could prove to be the easy part though, as he inherits a state in real trouble and in urgent need of reform. McGowan is aware of the challenges he’s likely to face and the need to speak honestly to the people about the tough road ahead.

It’s a shame these challenges facing WA haven’t received the attention they deserve in this campaign.

How would you like a big tax cut? Well, cop this!
Pensions to rise, which is great for all of us!
NSW payroll tax cut 50%. Other states will follow!
Frydenberg tells premiers: OPEN SAYS-A-ME!
It’s the blame game of the century: Gladys v Scott